Where Is Dr Disrespect? Everything We Know So Far Since Streamer's Twitch Ban

We've now finally heard from the man himself.

Doctor Disrespect, the popular Twitch streamer, has been banned from the platform - allegedly permanently.

We say allegedly because both parties have been tight-lipped on the ban and the reasoning behind it. And now, the man himself has broken his silence.

The Doc has finally spoken about the ban in an interview with The Washington Post, noting that he still hasn't been told why the ban happened.

"It was a total shock. Imagine showing up to work and the doors are closed and you can’t get inside. You’re going, ‘What’s going on?’ And you’ve been told you’ve been fired. But you haven’t been told the reason why. We just weren’t given an answer… It was the worst feeling,” he explained.

For their part, Twitch have only responded with the following:

"As is our process, we take appropriate action when we have evidence that a streamer has acted in violation of our Community Guidelines or Terms of Service. These apply to all streamers regardless of status or prominence in the community.”

Will Dr Disrespect return to Twitch? Here's what the man himself had to say in a conversation with PC Gamer.

"Obviously, for legal counsel, I have to be careful here. But I can say, however, that I will not be returning to Twitch, so, I mean, that's it."

"Let's just say all the cards are on the table. I'm more focused on just making sure whatever we do next, whether it's a platform move or not, that it's the right decision for the community and Champions Club that follows me. And that makes sense to what I want to continue to accomplish with this character in terms of taking things to the next level, and whether it's streaming or outside of streaming. So it's just being conscientious of that decision."

Where is Dr Disrespect?

On a Twitch stream this week, Tim 'TimTheTatman' Betar noted that there had been an influx of viewers from the Doc's channel.

“There’s a lot of Doc refugees here, I’m sure. For now, so." the streamer said, before noting that his words suggested that maybe he knows something about the Doc's potential resurfacing.

“Oh God, dude. Here we go. Dude, don’t even clip it! It wasn’t a breadcrumb! I don’t know anything!” he added.

Meanwhile, esports journalist Rod Breslau confirmed on Twitter that "timthetatman nor NICKMERCS has spoken to DrDisrespect since the ban, and to my knowledge no other streamer has either".

He went on to say "ya'll [sic] are misinterpreting clips. Likewise, Doc has not responded to half a dozen personal requests of my own to speak since the ban."

just to be absolutely clear, timthetatman nor NICKMERCS has spoken to DrDisrespect since the ban, and to my knowledge no other streamer has either. ya'll are misinterpreting clips. likewise Doc has not responded to half a dozen personal requests of my own to speak since the ban

Not only that, but Dr Disrespect has also remove Twitch from his bio and replaced it with his YouTube channel.

It suggests that the Doc may appear on YouTube, but more than likely is just a smart idea to direct his Twitter audience to a channel that is still active. 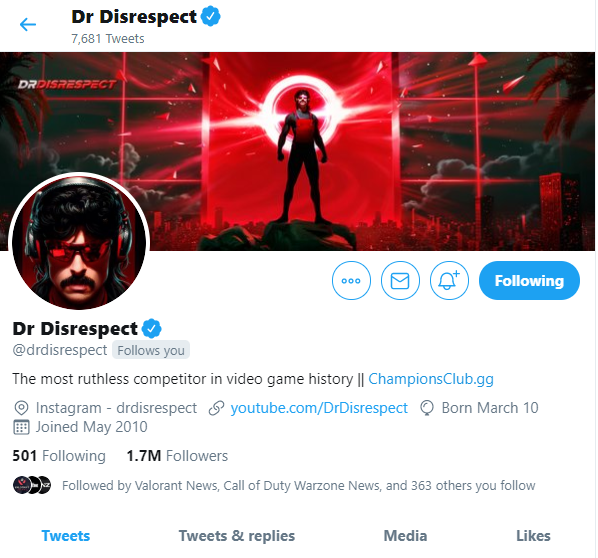 Rod Breslau has confirmed that no communication between YouTube and Dr Disrespect has taken place as of yet.

PlayStation Productions Working On Ten Projects Across Film and TV