Crysis Remastered: How To Defeat The Alien Mothership

The final boss isn't easy to bring down, so we want to give you a heads up!

Crysis Remastered is coming to Nintendo Switch, Xbox One, PS4 and PC.

The Nintendo Switch version should be available by the 23rd of July 2020, although other platforms seemed to be delayed, find out why here.

The bosses in particular in Crysis were a real journey, to say the least, we want to make it as smooth as possible for you,

Here's how to defeat the final boss, the Alien Mothership.

How To Defeat The Alien Mothership

The final challenge and last boss is the Alien Mothership.

Don't even think about attacking this boss as you would any other enemy, you'll have to follow a strict set of instructions.

Just like the Hunter, the Alien Mothership has a freeze ray so watch out for this as it can become your downfall.

To begin you must destroy four turrets, two are at the top of the ship on either side of the main body, the other two are lower down, vertical to the others.

Rocket launchers are your best option and the minigun is a close second, just like in out Hunter guide.

One missile should destroy each turret. That was the easy part, now we get to the real challenge.

Leave it to your teammates to weaken one of the sides of the ship. In the meantime attack the smaller alien mobs.

Remember whilst doing this to take cover as the main boss will still deal damage to you.

Once your team has weakened the side it will glow a bright blue.

Camoflague and get out the TAC cannon, allow the power bar to fill completely.

Now fire a single round at the damaged side and it should destroy it.

Repeat these steps with the opposite side. Make sure to grab as much ammo, etc as possible for the next part.

When both sides have been annihilated, the Alien Mothership will begin to move around.

Now you'll have to destroy the central hatch, this can be done with two missiles.

Once you've completed the last step, take out your TAC cannon again and aim for the core of the ship.

If it's a successful hit, you will have defeated the final boss. 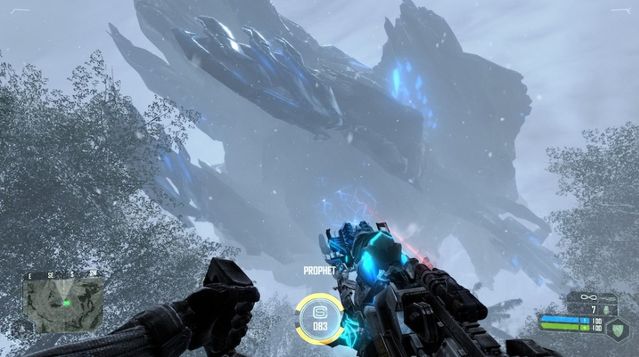