What can players expect with the release of the first season?

EA and Final Strike Games are set to release their brand new arena shooter in just a few days and we are already getting an ample amount of information regarding the first season.

Rocket Arena is going to be the first EA game that fully supports cross-play across all platforms, so it is an exciting time to be a gamer.

With the full release of the game coming soon, along with season one in just a few weeks; there is a lot to take in.

Here is everything you need to know about season one!

July 28 will be the beginning of season one and will end sometime around Fall 2020.

Season one is going to release two weeks after Rocket Arena becomes public to everyone across the world.

Season one of Rocket Arena is going to run for around three months, they have noted this is the estimated time for each season.

Check out the full outline of what is going to be included with the launch of the new season, along with future dates of new ones! 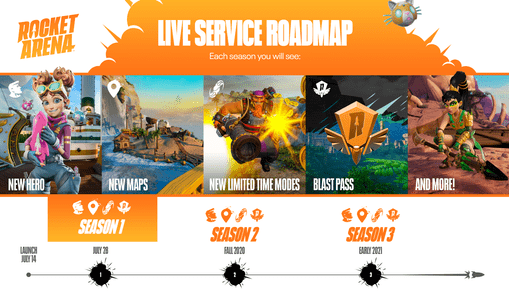 As you can tell by the road map for season one, players will be able to check out this brand new hero!

These new heroes will be introduced each season and will have an ample amount of different cosmetic options, and will also be free to players!

For season one the new hero we will be able to check out is named Flux.

Flux is a child prodigy ranked at the top of her class at Propulsion Prep, Crater’s boarding school for geniuses. She’s excitable and effusive, focusing on gathering data and using it to her advantage.

We will also be able to check out some new maps with each season, for season one we got a sneak peek of the brand new one above!

They have noted these will implement the following:

"Which will introduce free new multiplayer maps, exclusive themed hero outfits and other cosmetics, multiple new playlists and game modes as well as new event themed challenges. Events are held and themed within the regions of Crater, and may also introduce entire new regions to the game."

"Our Blast in Paradise Event starts August 12. Players can expect themed challenges, six new playlists, tropical cosmetics, unique earnable unlocks, along with two new maps that will be permanently added to the game. Explore the Lagoon of Doom, home to bottomless waterfalls and an endless amount of fog, or check out wrecked pirate ships with hidden treasure in Grand Harbor. The Runaway Megadon Event is coming in September, with more themed challenges, new playlists while you traverse through some of the ricketiest tracks in Crater in the new map Kayo Kanyon."

Sounds awesome! We cannot wait to jump into these new modes that the team comes up with. 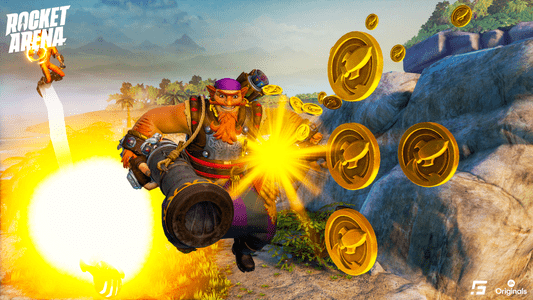 All player’s Pre-Season Rank will reset at the beginning of Season 1 as there are new variants of the specific map and mode combinations.

Using the battle pass concept that other titles such as Fortnite and Apex Legends made so popular; Rocket Arena is going to be using the "Blast Pass" model.

The pass is going to cost 950 Rocket Fuel, which should be around the same price as any other games battle pass.

Season 1 Blast Pass will have both free and paid tiers allowing players to earn a wide variety of customization items and Rocket Fuel. In total there will be 117 total rewards including 33 unique outfits.