Ubisoft's brand new battle royale Hyper Scape is here, but where are you landing?

Hyper Scape is the new kid on the block when it comes to battle royales, but if you've been lucky enough to get a code, you'll need to know what's going on.

To get a code, you'll need to watch Twitch streamers and keep your fingers crossed - but the streams are incredibly interactive, allowing you to see real-time leaderboards and vote on in-game events.

However, once you've got your hands on the code, you'll need to know where to drop. Luckily, we're here to help.

Hyper Scape is set in the cyberpunk future of Neo Arcadia, which consists of nine districts.

These districts will gradually dissolve - this is Hyper Scape's version of the Storm or Gas.

You'll start in one of the four corners of the map, so your starting position will determine where is best to drop. Of course, you can go for longer drops, but players starting in other corners will be looting ahead of you.

The map itself is very vertical, so utilise the jump pads and break those golden honeycomb windows to find the best items.

Read more: Hyper Scape: How To Get Twitch Drops To Access The Beta Limelight is one of our favourite places to drop at the moment, especially if you're starting in the northwest.

It's a big cylindrical building that's full of loot - especially those gold chests that drop the best stuff.

However, it's a hugely popular spot, so do your best to keep to cover and surprise your opponents. As always, communication with teammates is important, even after death when you appear as an Echo.

Generally, the closer to the edge of the map an area is, the earlier it will start disappearing, so keep an eye out for the telltale triangles here. 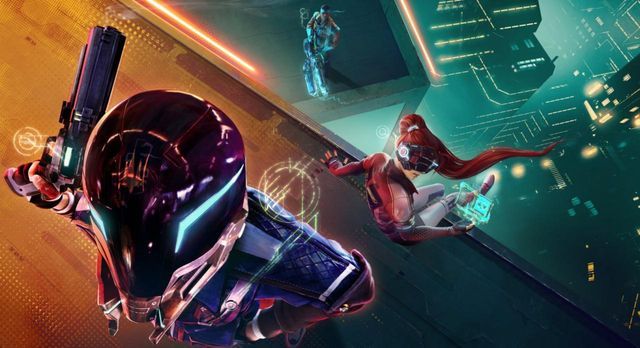 M.O.N.A. is great if you're starting in the northeast, I've always thought of it as the Newcastle of Hyper Space.

As you can tell, there's a pattern emerging for dropping into Hyper Scape games - go busy or go home (with less loot).

However, killing enemies will leave their loot exposed, so hanging around outside main hubs is a good way to snaffle some good weapons as well.

Read more: Hyper Scape Crowncast Extension: What is it, what does it do, and how to install it T-Loop is a great option if you're starting in the southwesterly corner of the map. Otherwise, it's probably not worth the long trip.

However, if you do end up in the four buildings that make up T-Loop, be sure to head to different buildings than your teammates to ensure you all get a good loot haul.

Our recommendation is to start from the tops of buildings and loot downwards, finding a jump pad outside to get back to the roof once you're done.

Communication is key in case you stumble upon enemies, so turn your mic on and practise those pings!

Read more: Hyper Scape: How To Get A FREE Twitch Sub To Use While Watching Streams

EYE OF THE TIGER: Drop into the eye of Hyper Space

Red Tiger is bang in the centre of the map, so it offers great utility and you probably won't need to take evasive action from decaying districts.

A fancy-looking French-style selection of buildings, you really feel like you're infiltrating the government or something when dropping here.

However, this makes Red Tiger probably the busiest of all drop spots - and that's saying something, the small urban map is filled with players so there's never a quiet moment!

The urban map makes all of the main buildings very busy, but if you want the best loot, that's where you need to head.