Since the mid-season 4 update, coding has been found in the game files for a fan favourite mode called Prop Hunt.

This casual and hilarious game mode appears to be returning to Call of Duty at some point in the near future!

Coding was found in the game files thanks to @Shandy445, who found the following:

According to @ModernWarzone, lots of new in-game additions indicate this is happening after the lost update.

It seems to be Warzone is getting the game mode, however, it's likely to appear in regular Modern Warfare multiplayer. 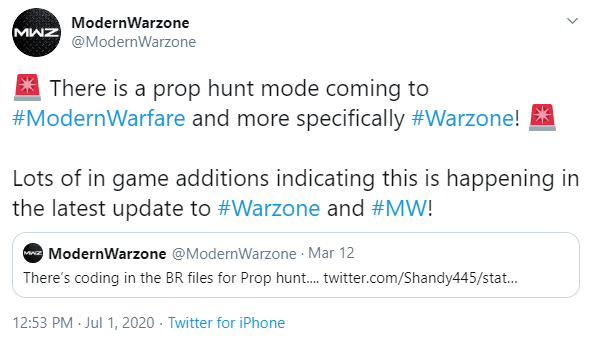 Prop Hunt was originally a game mode made in Gary's Mod in which players play a modified version of the game "hide-and-seek".

Players would be disguised as props and hide around the map, attempting to blend in with the environment.

It would be up to the seekers to find and kill the players/props to win the game and seekers to avoid being caught.

The game mode was adapted for Call of Duty and features up to 12 players split between two teams.

Props can not attack or kill the seekers but are usually able to use tools to make a quick getaway if need be.

In WWII, players had the ability to change into other objects, use decoys and drop up to three flash grenades.

Props would also make a whistling noise every 25 seconds, meaning sitting in one spot for extended periods of time were rarely possible.

Of course, it's unclear when this mode will release. Instinctively, we would expect it to be released in Season 5, but it could arrive in the current season.

There's nothing on the road map that indicates it will arrive, but it wouldn't be the first time Infinity Ward has dropped a surprise on our laps.

At the end of Season 3, they released the much-anticipated duos just a week before the new season launched.