Are the two kings of Verdansk no more?

So the biggest question on everyone's lips after the mid-season 4 update is: Did the Grau and MP5 actually get nerfed?

The 1.23 patch notes stated that a number of nerfs came in for the popular assault rifle and submachine gun, but Verdansk is still plagued with them.

So what actually happened? Did they actually get nerfed? Is Warzone free of their dominance?

According to TheXclusiveAce, these two guns have received nerfs in some areas and in some cases have actually been buffed.

Here's a breakdown of what was changed with these two weapons and what it all means.

TheXclusiveAce has outlined the changes to the Grau 5.56, confirming that the gun's damage range was subject to big changes.

Infinity Ward succeeded in this department as the damage range has been reduced by a few metres.

The medium damage range (standard 5 shot kill) has been reduced from 23 to 22. This has absolutely no effect in core multiplayer, but in Warzone it will require you to expel an extra shot on those wearing 2-3 armor plates. 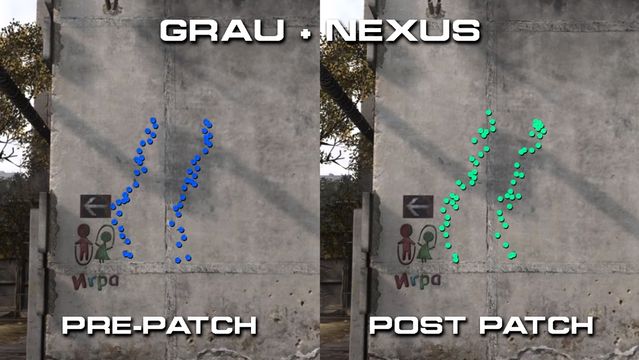 As well as the damage range, the recoil was targeted on the Grau 5.56. Overall, it's hard to distinguish a big difference, the recoil patterns appear to bob from side to side more than before. Some may even say it is an improvement, where it's lost it's tighter spread it appears to land more consistently in certain phases; you could argue it is an improvement.

So what does all of this mean to your gameplay? The difference will be noticeable on a case by case basis, but it's still the best gun in the game. While the nerfs will have effects on the weapon, the gun was so far ahead of anything else that it would take a seriously strong nerf to knock it off of its perch.

Warzone is about damage and accuracy - two things this weapon excels in, meaning people will still continue to use it until other weapons are buffed or this gets hit again.

These nerfs may make some other weapons more attractive, such as the M4A1, M13 and Kilo 141, all of which fair better at close to medium range, but it's still the top dog for now.

TheXclusiveAce has done a deep dive into how the MP5 has been effected with the new patch. Most notably, the 10mm rounds were targeted.

Both the 9mm and 10mm rounds have reduced the damage at closer to medium range, but it has actually seen a buff at a distance (instead of reducing).

This increase in its consistency is down to the increase in limb damage, requiring you to be less accurate and still come away with a kill.

As well as the damage, recoil was a bit talking point for the MP5; which supposedly got nerfed. This is simply not the case, the spray pattern has noticeably gotten tighter and more consistent.

He also notes that the gun didn't receive an official recoil buff at any stage, so it would have to have been a stealth change; so, in that instance, the gun's recoil was nerfed.

Many players have commented on the fact that they haven't noticed much of a nerf to recoil since the 1.23 patch.