Find the best classes for the new sniper rifle in this article!

The Season 5 Reloaded update for Modern Warfare and Warzone has gone live across all platforms. With the latest update, a brand-new sniper rifle has been added into the weapon arsenal.

The Rytec AMR packs a hefty punch thanks to its .50 calibre rounds, placing it among the likes of the HDR and the AX-50.

In this article, we take a look at the best possible loadouts for the new weapon along with the attachments that will give you the upper hand over the opposition.

To further increase its damage range, equipping a barrel will enable the weapon to excel even at the longest of distances.

In addition to a barrel, equipping a stock to provide maximum aiming stability alongside some grip tape to keep recoil levels to a minimum make the perfect additions for this weapon to dominate the long-range battle.

This loadout is perfect to pick off enemies without them even knowing your location. 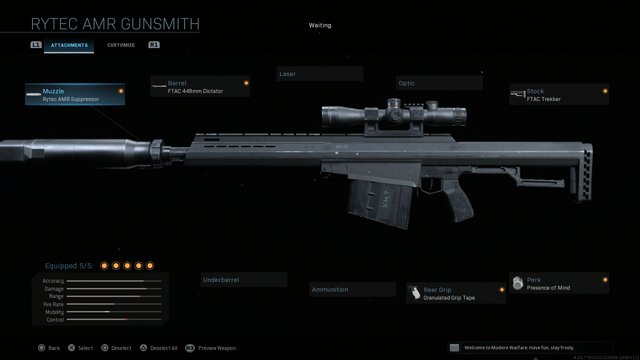 This combination of attachments enables players to keep hidden thanks to the suppressor while 'Presence of Mind' gives players an extended time to hold their breath before they take the all-important shot to eliminate a target.

This combination of perks will keep players invisible from UAVs and all AI targeting systems while tracker will allow players to get a rough idea on a potential location of an enemy, allowing them to scope in, just in case they pop out into the crosshairs.

Proxy mines are perfect for using in wooded areas as they often blend into the map, giving unsuspecting opponents an explosive surprise.

The smoke grenade can be the best friend of a sniper. Use it to create some improvised cover to relocate or block off a line of sight, allowing all efforts to be focused onto a specific area of the map.

To compensate for the slight damage reduction thanks to the suppressor, the addition of stopping power rounds make this semi-automatic sniper lethal in nearly all situations.

Once the powerful rounds are loaded in, it’s a one-shot kill from the waist up.

This is an unorthodox combination of streaks but the personal radar is perfect for sounding out any enemies converging onto your position, the airstrike can have a devastating impact in open areas of a map and the sentry gun is the perfect companion to defend your location while you are focused elsewhere. 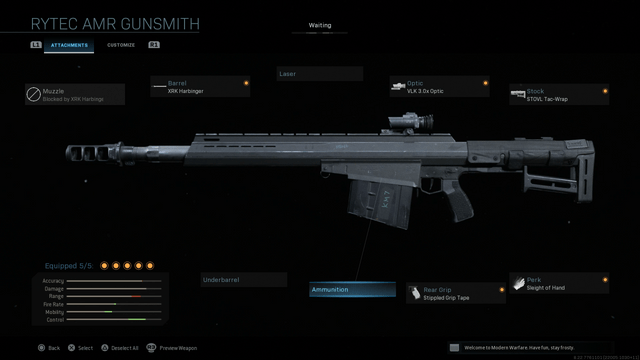 This set of attachments is a solid combination of quick aim down sight speeds and ease of control, making it perfect to get in amongst the action at a closer distance.

Both EOD and Battle-Hardened offer increased resistance to lethal and tactical equipment, perfect when playing in the congested areas of the map while Pointman converts killstreaks into scorestreaks, allowing you to play the objective to earn streaks at a quicker rate.

Thermite packs an extremely hefty punch. It sticks to most surfaces and deals gradual damage to opponents, enabling them to be eliminated extremely easy while the decoy grenade is the perfect tool to draw out enemies into the open, making them easy targets to dispatch of.

When playing aggressively, it’s likely that you will come under fire from a barrage of enemy utilities. A well-placed trophy system can block the majority of the utility, allowing you to stay in the fight for longer.

This streak combination is a good balance between dealing plenty of damage without taking too long to score. Combine objective work with a string of kills and all three streaks can be earned quickly. 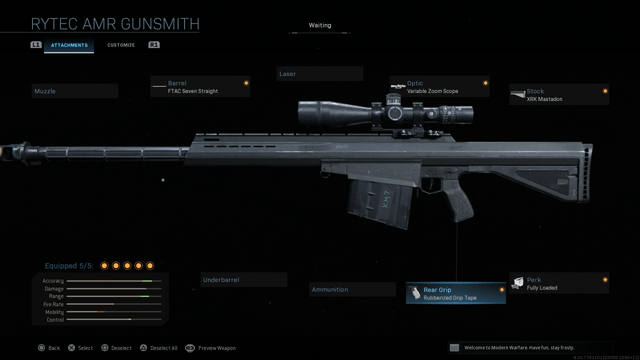 The third and final loadout excels at long-distance combat, ideal for the likes of Ground War where players often sit back and pick off enemies with ease.

This combination of attachments increases both accuracy and range, making the weapon much easier to use at extremely long distances.

The addition of fully loaded means that the likelihood of running out of ammunition is highly unlikely.

Double time doubles the length of the tactical sprint, enabling players to quickly navigate the map, high alert increases the awareness of players when scoped in or looking at another area of the map and shrapnel gives players an extra piece of lethal equipment to either use against the opposition or use to defend a particular location.

Semtex grenades are perfect for clearing out buildings and can be used to prevent an incoming attack. The snapshot grenade provides a temporary look at what is in close proximity, allowing you to potentially predict an offensive play from the enemy.

Found a good place to cause plenty of damage onto the opposition? Use a tactical insertion to respawn in the same position, saving you loads of time sprinting halfway across the map.

This combination is easy to earn and deals ridiculous levels of damage that can often swing a game in the favour of your team.