Modern Warfare And Warzone Season 4: How To Unlock The Rytec AMR Sniper Rifle

A new sniper rifle is arriving in Modern Warfare and Warzone during the Season 4 Reloaded update.

The new Rytec AMR Sniper Rifle will be a game-changer for those dropping into Verdansk, as it's set to feature explosive rounds.

So how do you unlock the weapon?

To unlock the Rytec AMR Sniper Rifle, you will need to complete the following in-game challenge to unlock it: 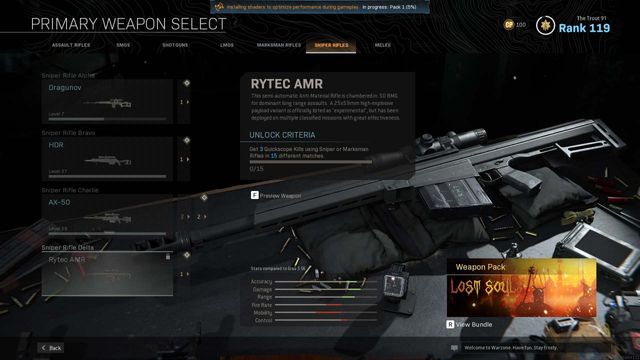 We advise putting on attachments that will greatly increase your ADS speed such as the Tac Laser, Singuard Arms Assassin stock, 17.0" Factory Barrel, Stippled Griptape and VLK 3.0x Optic.

Or, you can unlock it by purchasing a blueprint variant through the Store via the ‘Lost Souls’ bundle.

"The Rytec AMR is one of the deadliest semi-automatic anti-material rifles an Operator can get their hands on. Use the included picatinny rail to Gunsmith it out to the situation at hand and get back in the fight as your squad’s reliable sharpshooter."