Crash Bandicoot 4: It's About Time is arriving just N'Time for fall and there's a lot to talk about regarding its content and DLC.

Crash Bandicoot has been no stranger to in-game purchases with the recent remasters and this could have been a trial run for the new game.

Theories have emerged that the game will feature extra content after the game has been purchased.

Here's what we know about the DLC and microtransactions.

Update from August 6 State of Play

As revealed in a new gameplay deep dive, we now know that the game will offer a wealth of cosmetic skins for players to collect.

These range from the likes of Crash's motorbike outfit to a pirate suit, to one that has our Bandicoot hero dressed as a bird!

If you're wondering whether these will cost anything, you can rest easy.

According to Toys For Bob, skins can be earned by completing challenges or earning gems within levels.

Crash Bandicoot 4: It's About Time will feature "100+ levels of play" including "new game modes" according to a GameStop email. 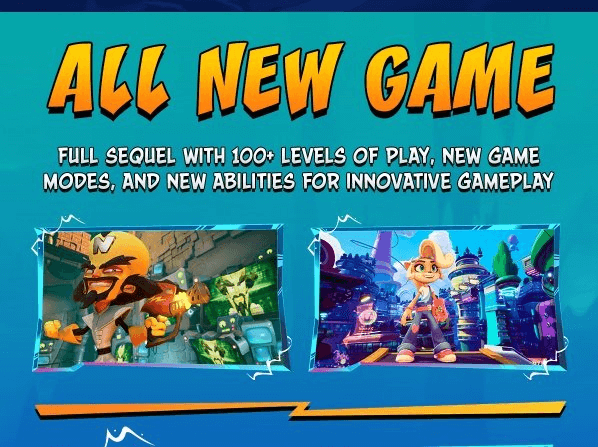 100+ could be a nice round number to lead with or the fact that the final number of levels have yet to be decided. Perhaps DLC content will be added later on? The recent remasters were no stranger to playing with new post-launch content.

The first-ever NEW level, Future Tense, was their first adventure into DLC content; while this singular level was free, it wouldn't be out of the question to expect this game to include level packs or added on modes in the future.

A Microsoft Store page for the game includes a plus symbol next to the game's price tag, which many betaken to mean that the game will offer in-app purchases; perhaps relating to new levels and post-launch content?

Toys for Bob has said that there won't be any microtransactions and it seems the culprit behind the "in-app purchase" moniker may be the free cosmetic skins that will be available as a preorder bonus.

This led many to assume that there would be DLC, either cosmetic or gameplay-wise, charging players from day 1.