Summer Heat Bruno Fernandes is live in Season Objectives! Here are all the objectives you'll need to complete to get him done FAST!

Bruno is definitely one of the most popular players in the Premier League at the moment, so this card will be completed by many! Here are all the objectives you’ll need to complete to obtain all 3 versions of Bruno Fernandes, along with his final Premium Summer Heat Fan Favourite 94 rated item. 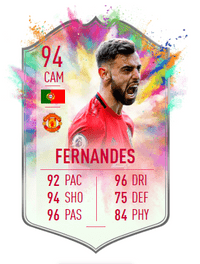 Given that the list of Objectives you’ll need to complete are largely focused around Bruno Fernandes, there aren’t too many specific requirements for other players that you’ll need to buy throughout your grind.

However, some top Portuguese players we’d recommend include:

One of the earlier objectives also require 6 Premier League players in it, so try to pick up some of these Portuguese players from that league: