FIFA 21 Beta News: Release Dates, Modes And How To Get A Beta Code For Xbox One, PS4 And PC

The FIFA 21 Beta is set to start rolling out in the coming weeks, here is all the news, release dates, and information on how to get a beta code for the FIFA 21 Closed Beta!

With FIFA 21 getting closer, it’s time to start looking forward to the FIFA 21 Closed Beta, which should be kicking off at the end of July/start of August.

Closed beta tests allow EA to get a closer look at not only how the game will handle under wider testing, but also allows for the community and game testers to provide solid community feedback regarding a number of gameplay mechanics.

What is the FIFA 21 Closed Beta?

The FIFA 21 Closed Beta is a limited time, limited capacity test of the new game, designed to highlight any key improvements that need to be made before launch, as well as how game mechanics and servers hold up under wider testing.

It is the first look many will get at the new game, with new gameplay mechanics, menus and other features included.

What is Included in the FIFA 21 Closed Beta?

To put it simply, everything. Ultimate Team, Pro Clubs, Volta, Kick-Off and potentially even new modes will be available to test in the FIFA 21 Closed Beta.

However, it is important to mention, that players will only be able to test out specific modes if they receive a code.

It wasn’t until the final few days of beta testing before all modes were unlocked for beta participants.

Given the COVID-19 worldwide pandemic has somewhat delayed FIFA 21 by a couple of weeks, it’s logical to assume that the FIFA 21 beta will be a little later than last years’ FIFA 20 beta.

FIFA 20 beta invites started getting sent out at the end of July, July 27th to be exact, with the FIFA 20 Closed Beta starting on August 9th, and finishing on August 22nd.

For FIFA 21, we’d expect the timeline to be shifted back a little, with invites being sent out around August 14th, before the Closed Beta testing begins around August 24th, running until around September 7th.

Who Is Eligible for the FIFA 21 Closed Beta?

The FIFA 21 Closed Beta should be, if going by previous years, only available to PS4 & Xbox One users. PC & Nintendo Switch users will not be invited for closed beta testing.

Furthermore, only players that have opted in to receive EA Emails will be eligible, as EA sends out beta codes via email.

How To Get a FIFA 21 Closed Beta Invite

In order to receive an invite, there are a number of criteria that you have to meet in order to increase your chances of receiving a beta code:

FIFA 21 Beta Invites, codes and registrations will be sent by email to select players in the regions stated above (unless changed from previous years.) An example of the email from FIFA 20’s closed beta can be found below.

Being a closed beta, only limited numbers of players will receive codes, so there is a chance that you may not receive one.

If you don’t receive one, DO NOT ATTEMPT TO PURCHASE CODES from accounts that are selling beta codes. Beta codes are linked only to the account they’re sent through to, meaning you won’t be able to use somebody else’s code on your own account.

At the start of the closed beta, if you receive a code, it’s likely that you’ll only be given access to specific modes that are stated in the email, such as Ultimate Team, Pro Clubs, Career Mode or Volta. It is worth noting though, that near the end of the closed beta, all modes are opened up to closed beta participants. 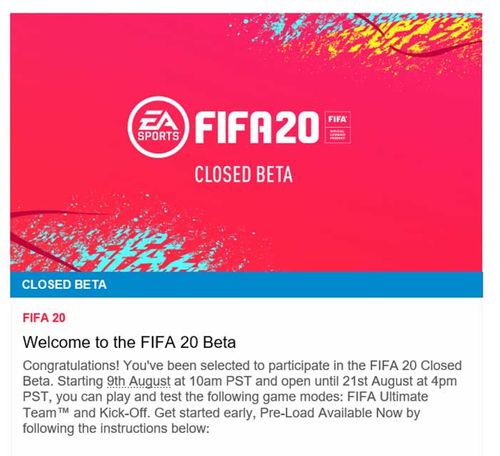