Avellone has also been removed from Vampire: The Masquerade - Bloodlines 2.

Dying Light 2 doesn't have a release date yet, despite having been intended as a 2019 and then early 2020 game, but developer Techland has cut ties with writer Chris Avellone following allegations of sexual harassment.

Considering Avellone's name was prominently attached to the title, this is a big move.

Avellone is known for his work across multiple franchises, including huge franchises such as Star Wars: Knights of the Old Republic, Baldur's Gate, Fallout, and Star Wars: Jedi Fallen Order. 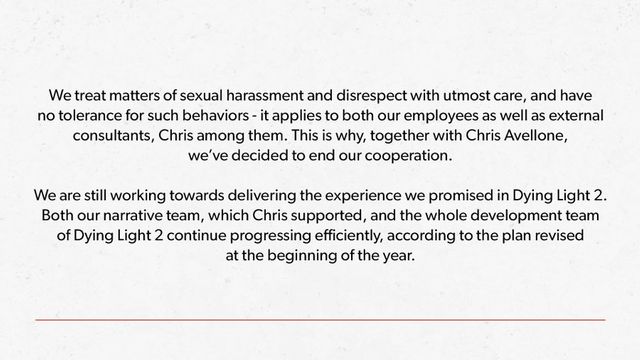 Paradox Interactive, currently working on Vampire: The Masquerade - Bloodlines 2, has also distanced itself from Avellone. Following a tweet from Gamasutra, Paradox's statement reads as follows.

“Bloodlines 2 publisher Paradox Interactive has been in contact to explain that Avellone was only ‘briefly’ involved in the project, and that ‘none of his contributions remains in the game that Hardsuit Labs is continuing to develop,’” reads the tweet."

Gfinity and its employees stand with the victims and condemn all acts of such misconduct.