The next update could have some stellar weapon changes!

We are a few weeks into the fourth season of Modern Warfare, and players all over the world are enjoying one of the best Call of Duty's in recent memory.

Patches have always been a large component of any Call of Duty, so the mid-season update for season four is expected to be massive for the game.

With little changes at the beginning of the season, we can expect more down the line!

In a tweet posted by Joe Cecot who is the Co-Design Director of Multiplayer for Infinity Ward, he noted that there is a bunch of weapon changes coming in the midseason update.

What these changes entail is unknown as of now, but since the release of Season 4 lacked weapon changes. We can expect an ample amount when this update rolls out.

Modern Warfare Season 4 was released back on June 10th, 2020; so the mid-season update is not expected for at least two more weeks. 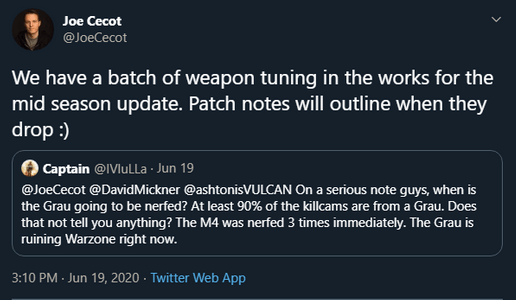 During the Juneteeth Warzone Charity stream that was held this past Friday, there was an ample amount of news coming out of Taylor Kurosaki. Who is the current narrative lead of Infinity Ward.

In the video clip courtesy of @ModernWarzone, they note that Soap is coming to the game soon. As well, it is unlikely that we will get a new map anytime soon, as they noted this is only the beginning of Verdansk's story! 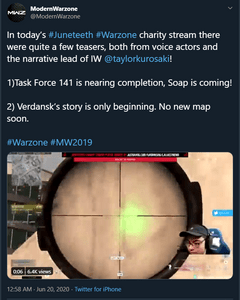