93 Summer Heat Mendy is live in Season Objectives! Check out all his Objectives and how to get him completed ASAP!

Being one of the best LBs on offer this year, you’ll definitely want to get this one done, so here are all the objectives you’ll need to complete to obtain all 3 versions of Mendy, along with his final, Premium Summer Heat 93 rated item. 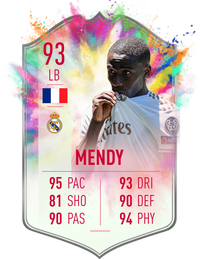 Best Players, Tactics And Tips To Complete This Objective Fast

When building a team around Mendy, you'll need to focus on French and La Liga players for linking to Mendy, as well as quickly completing a few objectives.

The Skilled Footing, La Liga Lineup and French Formation objectives can be completed using French La Liga players that have 4 skills and a 5* weak foot such as FUT Birthday Griezmann, FUT Birthday Thomas Lemar and any version of Ousmane Dembele.

Other notable French La Liga players worth using are Karim Benzema and Nabil Fekir - although they will not complete the Skilled Footing objective.

To complete the assist and crossing objectives, such as Curated Crossing and Maestro Mendy, we recommend playing him as a left-winger to bomb down the flank and look to play passes or crosses to play charging into the box.

It's also possible to complete the Winning Wing-Back objective using him in this position or swap him to right-wing so he can cut inside on his left foot. Or play some early crosses in and have him slot home at the back post.

Due to his rapid pace and low shooting ability, we would advise using the Deadeye chemistry style to help lift his shooting and passing to complete the corresponding objectives.