Spider-Man: Miles Morales was a real shock to most viewers watching the PS5 reveal event.

Sony has since gone more in-depth in terms of details which dulls the excitement a bit - the new Spider-Man game is a standalone expansion.

Previously, Sony had explained that the game is an enhanced version of the PS4 original. That's according to Simon Rutter, head of European business for Sony.

He told The Telegraph that the new Spider-Man game we saw is actually an expansion to the PS4 game. They have edited certain content to ‘upgrade’ it.

“I guess you could call it an expansion and an enhancement to the previous game,” he said.

“There’s a substantial Miles Morales component – which is the expansion element – but also within the game as well there’s been major enhancements to the game and the game engine, obviously deploying some of the major PlayStation 5 technology and features.”

However, in a series of tweets, Jason Schreier of Bloomberg has clarified it is a small standalone game. 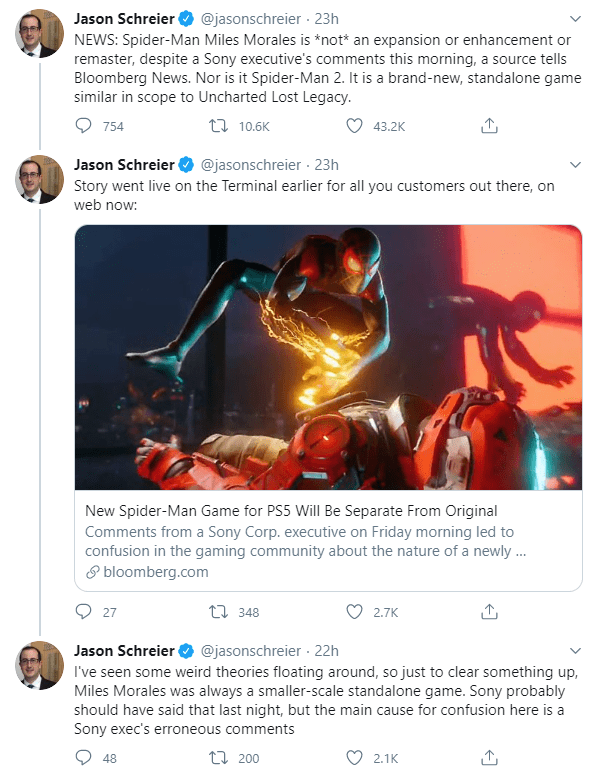 It's all a bit confusing and hopefully, some clarification will come soon. In fact, Insomniac has confirmed it'll be revealing "more about this standalone game at a future date".

Bloomberg has since compared the game's scope to that of Uncharted: The Lost Legacy, a spin-off of sorts that began as DLC for Uncharted 4. It ended up being a little shorter, and a little cheaper too.