A Youtuber by the name Daqarie released a 'leak' video revealing DICE may be developing a remaster of Battlefield 3.

Many Battlefield 3 fans are getting excited over the possibility of a remaster as well as a brand new game in Battlefield 6.

Someone well known for leaks has created a video detailing what may come in the potential game.

EA stated that a new Battlefield game would be coming to our screens in the future.

Most believed this would be the next instalment in the series and would be based in the present or modern-day.

Reportedly DICE, the developers of the game, is working on Battlefield 6.

But recently a Youtuber, who has a pretty solid track record with accurate leaks, has claimed that there will also be a remaster of Battlefield 3 on its way.

Apparently, according to Daqarie BF3 has been on the cards since as early as the launch of Battlefield 5.

Many think EA is following in Activision's footsteps with the intention to re-release old content but with improved graphics and functionality.

Rumours are circulating this game will launch WITH Battlefield 6 or at least alongside it.

Daqarie has got many things right before.

He previously leaked accurate information about Battlefield 1 and 5 so it's likely the statements in his video are correct.

Although there's always a chance that information is misconstrued or false so take it with a pinch of salt for now.

Notorious leaker, LongSensationYT, has said that he doubts a remaster is in the works as it makes little sense to release two modern shooters alongside each other. 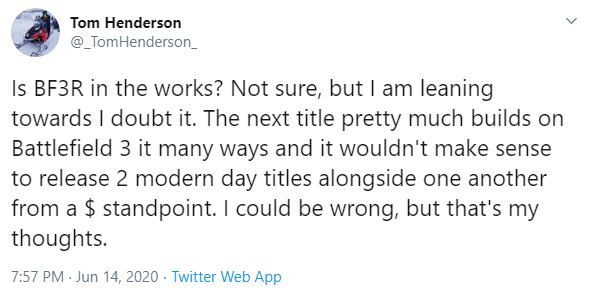 Youtuber Daqarie created a video going into detail about the remaster, which has since been taken down.

Apparently an EA manager contacted him and requested he take the video down.

This could give even more weight to Daqaries claims - if BF3 wasn’t in development they most likely wouldn’t be phased by the video.

He stated that the game will be a next-gen title for PS5, Xbox Series X and PC - Battlefield 6 is set to arrive sometime in 2021.

Many were hoping there would be an announcement at PS5's reveal event but nothing came of it.

Now the next possibility will be at EA Play.

BF3 Remastered is meant to contain all of the original DLCs and content including, Back to Karkand, Close Quarters, Armored Kill, Aftermath and End Game.