Horizon Zero Dawn's sequel has been confirmed for PS5 and PS4.

Horizon: Forbidden West is the next game in the franchise and a sequel to the successful Horizon Zero Dawn.

The action role-playing game again features Aloy, a hunter who ventures through a post-apocalyptic land ruled by robotic creatures.

Developer Guerilla Games has confirmed that the PC version of Horizon: Zero Dawn will receive fewer updates after the 1.10 patch as the team moves over to work on the sequel.

Horizon 2: Forbidden West has been confirmed to be scheduled for a 2021 release on PS5, but is also coming to PlayStation 4.

What Is Horizon 2: Forbidden West?

Among the ruins of San Francisco, Aloy will encounter a far-reaching infection Guerrilla calls the "red blight." She'll be able to don a mask and explore underwater areas of the map, as well, judging from the first teaser trailer.

Thanks to the power of the PS5, Guerrilla says there'll be "virtually no loading screens."

While the first game was single-player only, with players stepping into the boots of Aloy, the sequel is intended to be playable in co-op, at least according to rumours.

Previously leaked concept art showed multiple players battling the original game's large beasts, so could we be teaming up with friends on PS5?

VGC reports that "it’s understood PlayStation was equally keen to see online functionality implemented in the sequel," so that could be the case.

The trailer was part of the PS5 games reveal, check it out below. 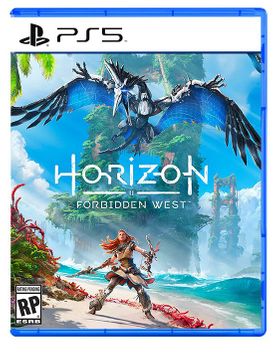 The game will be available on the PS5 AND PS4, making it a cross-generational title like Spider-Man: Miles Morales.

Sony and Guerrilla have released the soundtrack from the epic reveal trailer.

The full video of the song can be viewed down below, or with the following link, you can play it on your music streaming platform of choice!