Hitman 3, the final game in the trilogy, is coming to PS5 and Xbox Series X!

This is one title many next-gen console owners have been looking forward to since its announcement.

Agent 47 is back in action and it looks like he's heading to a new set of locations in the closer to the "World of Assassination" series.

Even more excitingly, the game will get PSVR support!

Here's everything we know about IO Interactive's next game.

The game's launch trailer is here:

Hitman 3 is coming on January 20, 2021, meaning we don't have long to wait to be reunited with our favourite barcoded bald man.

While it's unclear what Hitman 3 is all about, according to Hakan Abrak of IO Interactive, he's back for his most intimate and professional contract in his entire career.

This is also the conclusion of the World of Assassination Trilogy, and early previews have suggested that the narrative is not only more important than before, but it's actually told much more clearly, too (don't worry, there's a handy catch-up video if you missed the last two games).

We've put together a handy guide to get your Hitman 1 and 2 content and progress into Hitman 3.

Hitman 3 doesn’t add too much into the core World of Assassination Trilogy.

The gameplay has been perfected in the last two titles, so we can’t see them needing to rework it too significantly.

Though Agent 47 will have one new tool at his disposal in this third instalment, the Camera, which can be used for intelligence gathering and opening doors and windows remotely.

There will be six whole new levels to explore, so that’s definitely a lot of new content.

Players will be able to visit Dubai, Dartmoor, Berlin, Chongqing, Mendoza and the Carpathian Mountains.

What’s more new than a fully immersive experience being added to the series?

Every single location from every Hitman game in the World of Assassination trilogy will be supported in PSVR! 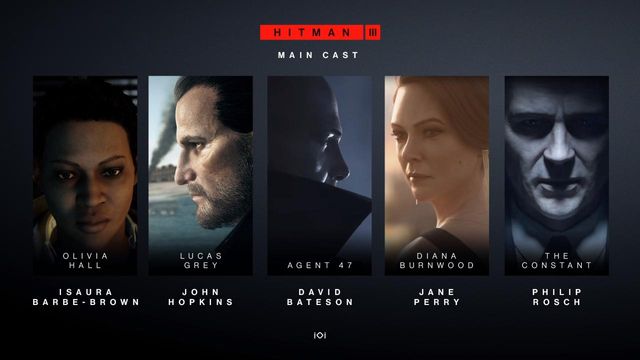 Read More: Hitman 3: How Many Locations Are There?

If you want a bit more Hitman 3, here's the opening cinematic!

You can watch the first five minutes of Hitman 3 thanks to Game Informer.

IQ Interactive has released a statement surrounding players upgrading their version of the game to next-gen consoles. Check it out below:

"Yes, we’re doing a next-gen upgrade for consoles and yes, it’s free. Console players can buy (including pre-order) a digital edition of HITMAN 3 on the current generation of platforms and receive a free upgrade to the next-gen version of the game for no additional cost."

As revealed during the August 6 State of Play, the game will also offer a VR mode which will also work with the previous two games on PSVR.

The game will also come to Nintendo Switch via a Cloud Streaming version on the same date that it hits other platforms.

The game will get added ray-tracing support as a post-launch addition on PC, IO has confirmed in a blog post.

If you are playing on PC, the game will be an Epic Games Store exclusive, although IO has confirmed that users can still import their Hitman 1 and 2 content from Steam.

If you do import the last two games, their file size will actually shrink. The entire trilogy will weigh in at around 100GB according to a thread on Resetera.

For the first time in the franchise's history, you'll be able to step into Agent 47's shoes in VR with PlayStation VR.

With all locations from Hitman (2016), Hitman 2, and of course, Hitman 3 included, players will be able to immerse themselves fully in the Hitman experience.

Or, you know, just dick about.

Check out the VR trailer below:

Hitman 3 will come in two different editions, and pre-ordering either will get players the "Trinity Pack", which offers a white, red, or black suit for Agent 47.

That pack offers a digital artbook and soundtrack, a director's commentary for mission intros, and premium outfits as part of the Deluxe Escalations. 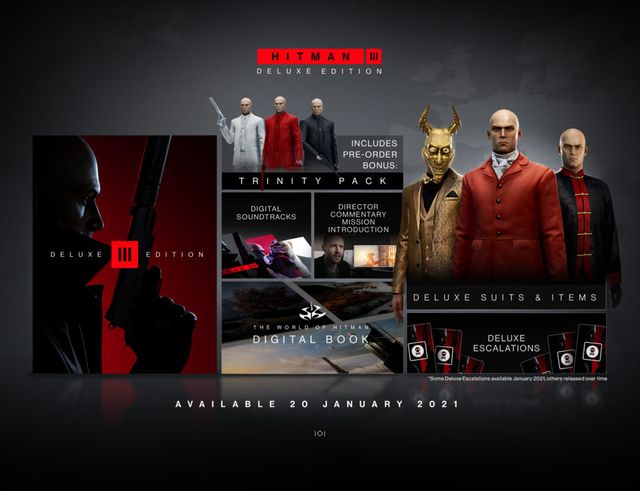 Elusive Targets, Escalations and Contracts are coming to Hitman 3.

Elusive Targets sets up the "ultimate Hitman challenge" where you must track down a special target without the aid of the HUD or Instinct ability.

Escalations return with new elements thrown into the mix to put your assassination skills to the test. Increased security cameras, disguise restrictions and plenty of "complications".

Contracts lets you pick your own targets and lets you decide how you want to take them out. Once you've achieved your goal, you can then share the challenge you've tailored with friends to compete for the best score.

Ghost Mode, however, will not be returning.

Read More: Hitman 3: What Are Escalations?

Looking for some help with Hitman 3? Check out these guides: