Find the best loadouts for the newest weapon added to Modern Warfare.

After a slight delay, Season 4 of Modern Warfare and Warzone has arrived! With brand-new maps, game modes and more to get stuck into, two new weapons are available to unlock through the Battle Pass, the Fennec sub-machine gun and the CR-56 Amax assault rifle.

Unlocked at tier 31 in the Battle Pass, the latest addition to the AR category is Infinity Ward’s take on the Galil AR which has featured in previous titles.

In this article, we take a look at what we can expect for the CR-56 AMAX, its best attachments, the best loadouts to use and where it could slot into the metagame of Modern Warfare.

As always, adding some sort of barrel to improve damage output and decrease damage drop off at longer ranges will be the key to make it effective at distance.

Along with a barrel, including stock on your loadout is integral to maximise mobility and to make the CR-56 lethal in every possible situation.

After a bit of time testing out several different combinations of attachments on the CR-56, we’ve found three loadouts that suit every single style of play. 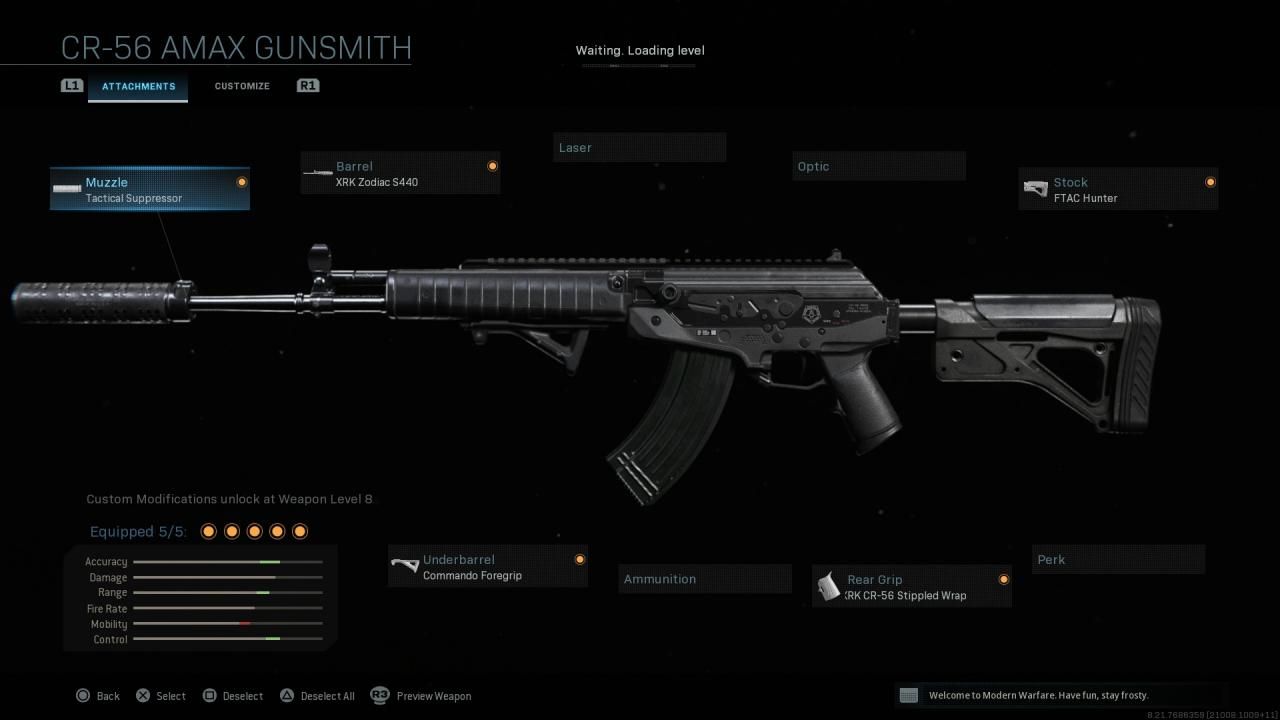 This first CR-56 loadout is perfect for staying hidden on the map and packs a hefty punch in mid-range gunfights.

This attachment combination provides plenty of stability when engaging with a target at range and despite the addition of a suppressor, damage is still extremely high with kills only taking four bullets in most scenarios.

Scavenger is essential for this class to work as effectively as possible. With the attachments to allow you to navigate the map with ease, Scavenger will mean you never run out of ammunition on the battlefield.

Ghost keeps you hidden from any opposition UAVs in the air, ideal for making a flank on the unsuspecting opponents while Battle Hardened reduces the strength of enemy flash, stun and gas effects, enabling you to keep focused on the action taking place.

Perhaps the most versatile piece of equipment in the entire game, the frag grenade can be used for pretty much anything from clearing outbuildings to being tossed all the way across the map in the hopes it connects with an enemy.

Like the frag, the smoke grenade can be used as a last-ditch piece of cover or to block off a line of sight to enable you to relocate to another position safely.

Armed with a suppressed weapon, you don’t want your own footsteps to give away your position so use Dead Silence for a slight speed boost and totally silent footsteps, allowing you to move around the map without the enemy knowing your position.

This streak combination is ideal for utilising the Wheelson to its full potential. Call in the Counter UAV before deploying the mobile turret to keep its location hidden from enemies, enabling you to deal maximum impact to the opposition.

The addition of White Phosphorus is the icing on the cake, dealing damage to the enemy team all over the map, making them easy pickings for you and your teammates. 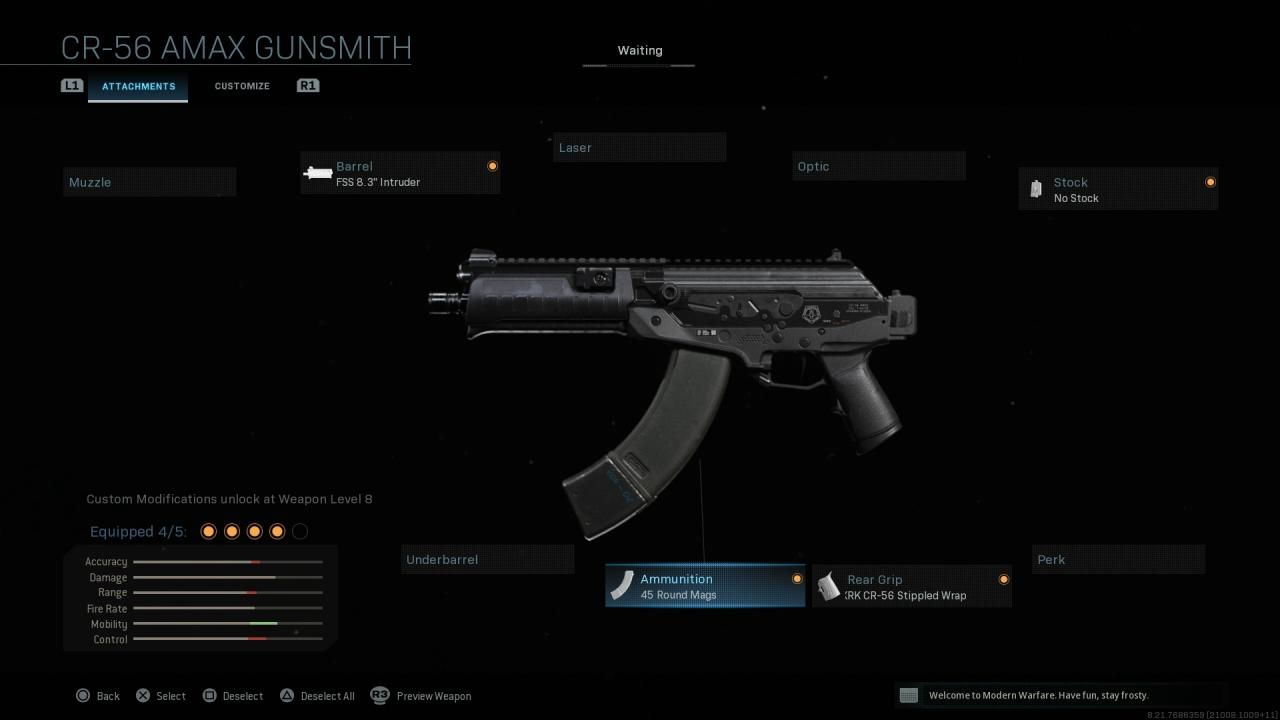 Want to get in on the action? This is the class for you.

This set of attachments makes this weapon lethal in close-quarters situations. The larger magazine means less time reloading and more time taking down enemies with ease.

The small barrel doesn’t hinder damage output while the additional mobility puts it on par with some SMGs.

Considering this class is geared towards aggressive play, EOD is a must in order to survive for longer periods of time.

The increases resistance to enemy explosives is ideal to keep you in the fight. It’s no secret that being aggressive means you’ll probably be dying a lot more so Hardline will mean your killstreaks require one less kill to earn, meaning you’ll still have a chance to score the streaks higher up the list. Lastly is Amped.

The faster weapon swap is ideal in those situations where you can’t afford to reload so choose your secondary weapon wisely.

It is personal preference when it comes to equipment selection but we found that the Semtex is ideal for playing aggressively thanks to its ability to stick to surfaces and to clear out any players holding down an objective. The stun grenade makes this a deadly combination, slowing down enemies allowing you to use your Semtex to finish them off or take them down with your weapon.

The aggressive nature of this class means you will find yourself constantly battling for control of various objectives on the map.

A well-place Trophy System can alleviate the bombardment of enemy grenades as you and your team hold down the area to earn those valuable points.

This particular combination of streaks is very easy to earn when playing with plenty of speed and aggression.

The UAV provides support for you and the rest of the team while the airstrike and VTOL deal the damage and can rack up plenty of kills. 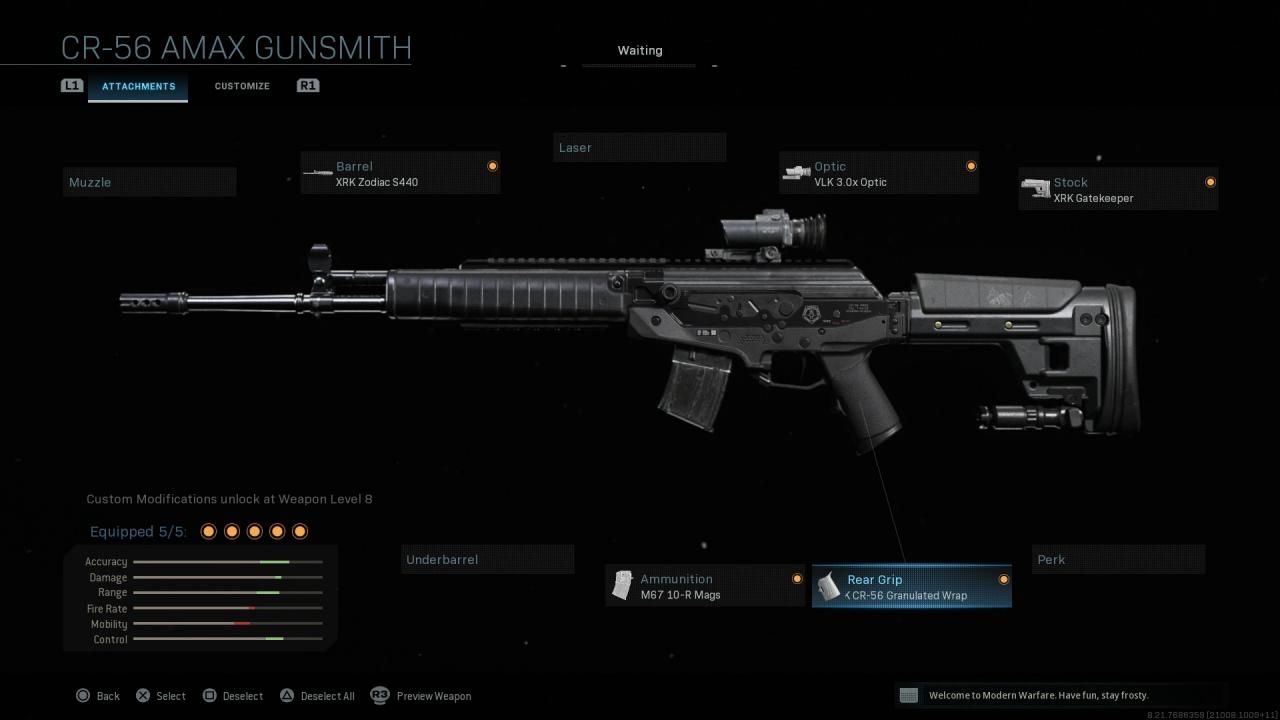 The third and final class is perfect for picking off enemies at long distance with ease.

Aimed with precision and power in mind, this class lends itself to posting up in a position that overlooks the map and taking out enemies with a couple of devastating shots.

The stock and rear grip provide a much-needed stability boost while the 10-round magazine gives an increase in damage which reduces the time to kill to just two bullets from the waist up.

Cold-blooded makes you undetectable from any AI targeting system, keeping you hidden from those pesky VTOL Jets and also keeps you hidden from any thermal optics, perfect for avoiding any snipers looking for easy targets.

High Alert further increases your awareness, causing a flash to appear on the screen when an opponent has locked on to your location. Shrapnel enables you to carry an additional piece of lethal equipment which you can either use to reinforce where you’re hiding or to dish out even more damage. The choice is yours!

Rather than opting for a Claymore or another piece of equipment, proxy mines blend in extremely well with most surroundings, making them hard for the enemy to spot when they rise from the ground.

The decoy grenade is probably one of the most underutilised pieces of tactical equipment in Modern Warfare and it’s perfect for drawing out enemies into the open for you to dispatch of with clinical precision.

With such a small magazine, the likelihood of running out of ammo is high especially if you are sat in a position overlooking all the action. Equip a munitions box to ensure the supply never runs dry and you can keep raining fire down onto the opponents from afar.

This combination of streaks is a solid balance between supporting the rest of the team and laying down the heavy artillery.

The emergency airdrop gives you access to three random streaks that could be anything from a personal radar to a juggernaut so the possibility of still getting in amongst the action is still high.