Ubisoft Forward revealed Far Cry 6 is coming early next year, and we can't wait to play it.

Far Cry recently ditched the exotic locale for a more familiar, North American setting, but the sixth instalment will take players to an island paradise known as Yara.

Here's what we know about Far Cry 6.

Ubisoft has bizarrely removed the physical discs for the Xbox Collector's Edition of Far Cry 6 in the UK.

The £179.99 version of the game will come with a digital copy of the new title - it's not the only franchise to be effected.

Narrative Director of Far Cry 6, Navid Khavari, reveals some background information on the next villain of the series.

The video reveals some context behind Castillo and his beliefs as a dictator.

Sit down with our Narrative Director Navid Khavari as he gives a closer look into Antón Castillo. #FarCry6 pic.twitter.com/omFDS2cywe

Ubisoft has confirmed 4K graphics will only be available on Xbox One X and Xbox Series X.

Responding to a fan question, the support team stated 'as stated on the banner, Far Cry 6 is 4K Ultra HD on Xbox One and Xbox Series X only.'

This will be a huge disappointment to fans of the game who are looking to purchase the PlayStation 5.

In an interview with Game Rant, the game Narrative Director Navid Khavari revealed Far Cry 6 will offer a third-person perspective for cutscenes.

This addresses the critique that the Far Cry protagonists of the past have seemed voiceless and detached from the player.

This will allow the player to connect with Dani as a character and immerse themselves in the story.

It also grants the player another element of choice which is always positive in games.

Far Cry 6 is now available for digital pre-order and pre-download on Xbox One.

The Official Xbox Series X box art has been revealed and it looks great. Check it out below: 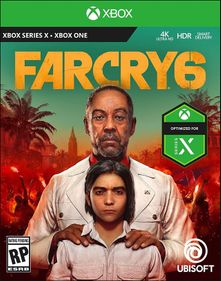 The incredible new trailer for Far Cry 6 has been revealed, along with a release date.

The game will arrive early in 2021, confirming it will debut on the next generation of consoles.

Far Cry is an FPS franchise published by Ubisoft. The games don't tend to share a narrative but the recent games feature a large open world in a wilderness setting, forcing the player to hunt and craft to survive.

Farcry 6 is developing exploration and the setting of the Farcry series by implementing an urban environment for players to explore.

The game will be based in the fictional island nation of Yara, an exotic and tropical location.

The country is divided and protests are taking place opposing the ongoing dictatorship of Anton Castillo, the antagonist of the title.

The Farcry series has garnered a reputation for complex and interesting antagonists, so expectations are high for Anton Castillo.

Our protagonist looks to be Dani Rojas, a character playable as both male and female.

Farcry, despite being known for its antagonists, has often fallen short in creating an interesting protagonist.

Let's hope our character isn't voiceless and has a personality that can immerse the player.

Farcry is renowned for its tropical landscapes and rural environments and the sixth game in the series is no different.

A Ubisoft Narrative Director has confirmed the setting and Guerilla elements of the game are inspired by Cuba.

Players will be able to experience an urban landscape through the city of Esperanza.

We can expect the traditional Farcry mechanics of exploring, gathering and hunting to play a key role in the title.

Alongside this, with the introduction of an urban setting, there are endless possibilities in terms of activities and mechanics.

Check what changes we want to see in Farcry 6 here.

The Far Cry 6 Season Pass is included with the Gold Edition or higher.

The Standard Edition does not include the Season Pass and currently, it cannot be bought on its own.

The Season Pass will come with 3 future DLC's.

The game is set in Yara, the franchise's largest world yet. This tropical paradise is ruled over by a terrifying dictator, and is "frozen in time". Expect classic cars and architecture, as well as palm trees galore!

Farcry 6 will be coming to the Xbox Series X and PS5.

Fans are expecting both consoles to be able to run the game at 4K Ultra HD.

A query was raised by @XcloudTimdog on Twitter about a specific statement on the Farcry 6 box art.

The fine print at the bottom of the box reads, '4K Ultra HD on Xbox One X and Xbox Series X ONLY'.

This would suggest that the 4K Ultra HD will not be possible on the PS5.

Were going to assume this is just a poor choice of wording, however, it is something we will need a confirmation on.

Check out our full article on the topic here.

Dani Rojas be the main protagonist in Farcry 6, the character will be playable as male or female.

Dani was born and raised in Yara.

They did not want to join the revolution, however, they got caught up in Guerilla movement and now has the goal to take down Anton.

Anton Castillo is the dictator of Yara and the villain of Farcry 6.

Anton is a complex and interesting villain who must balance the running of a country alongside bringing up his son.

His son, Diego, will take his place as dictator of the country after his death.

Anton is impatient with his son's maturity and knowledge of politics as he concerned about the revolution and the succession of his son after his death.

Like most of Farcry's villains, Anton will not be a typical 'bad guy' villain.

His character will be complex and his motivations may seem justified at points.

Judging by the ongoing revolution, it may be fair to say that Anton is not as concerned for his people's wealth as he should be.

Being a dictator, he most likely takes his privileged lifestyle for granted and cannot relate to the struggles of the people of Yara.

Let's hope Anton can live up to previous Farcry villains and pose a significant threat to our protagonist.

We don't know much about Diego other than he is the son of the antagonist of Farcry 6, Anton Castillo.

We know Anton is raising his son ready for the succession of his dictatorship.

However, we know very little about his personality.

Rumours have been circulating that Diego may a young Vaas from Farcry 3.

Both of them have similar facial features and a slit on their left eyebrow.

It was also hinted by Michael Mando, Vaas's voice actor, who said that he may be returning to Farcry.

Perhaps what fans are most excited about is the dog Ubisoft has revealed will be in the game.

A sausage dog called Chorizo will be available to recruit and fight by players side.

Pre-orders of the game will receive a Chorizo skin, a very big incentive.

The game will likely release on the new PS5 and Xbox Series X consoles if it releases in early 2021.

We can also expect the PC to share in the glory via Uplay and can expect the PS4 and Xbox One to receive the game.

The Nintendo Switch, although unconfirmed, is likely to miss out on the offering.

In terms of 4K support, there is confusion surrounding Farcy and 4K support on PS5.

Rumours have been circulating that there is a possibility that Farcry 6 may not receive 4k support on the PS5.

The query was raised by @XcloudTimdog who noticed the text '4K Ultra HD on Xbox One X and Xbox Series X ONLY' on the box art.

Although it is unlikely that the PS5 will not support 4K for Farcry 6, it is a question that needs to be addressed.

Here's a summary of all the pre-order options for Farcry 6.

Check out our full article on pre-orders here.

Ubisoft Forward will take place on the 12th July and other than the already announced games, a few unannounced titles are being teased.

Ubisoft has shifted its focus to its high-potential titles and is excited to release “five new AAA games in 2020-21.”

Three of these are Gods and Monsters, Rainbow Six Quarantine, and Watch Dogs: Legion and the other two will be released during the Q4 (January – March 2021) period.

One of these mystery titles is expected to be Far Cry 6, according to many rumours.

If this is the case, we can expect to see the first reveal trailer as well as confirmation of an estimated release date and what platforms this will launch on.

Whether we will get a gameplay demo or not is unknown and we would guess it's unlikely at this stage. The developers may speak very broadly about the game and their intentions, including the setting and the story, but it will be rather limited.

With two-player co-op being added in Far Cry 5, it's extremely unlikely that this feature will be removed going forward.

Co-op action was only available on an online basis, rather than local couch co-op; perhaps this will be changed in the new game?