FIFA 21 will be revealed at EA Play, so here's what to expect.

FIFA 21 is the next game in the franchise and will be one to remember as it's both the last major release on the PS4 and Xbox One, as well as the first on the PS5 and Xbox Series X.

While we wait for the full details on what lies ahead for this game, we'll get our first insight as to what's to come with EA Play (EA's replacement for the cancelled E3 2020).

Here's what was revealed!

The game is being released on the 9th October 2020 according to Steam. 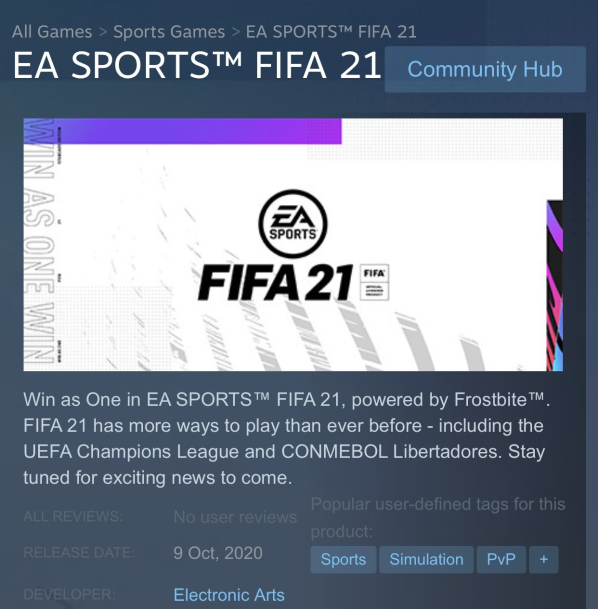 What To Expect From EA Play

EA Play will be the first major announcement and an official nod to FIFA 21.

While we're not expecting too much to be given away regarding the individual modes and their various features, we should get some details on new game mechanics.

Every year, the major focus of the first reveal is focused on the gameplay mechanics itself. Here we'll be told what new features are being added and what is being changed.

Nothing has been confirmed yet, but there will no doubt be a big overhaul to the gameplay. Usually, EA target things that the community had a huge issue with the previous year e.g. in FIFA 19, the timed finesse was extremely overpowered, so it was dramatically nerfed in FIFA 20.

This year's FIFA has revolved around agile and fast players that can turn directions quickly (often unrealistically) and exploit small pockets of space as a result of a drag back skill move.

It's likely the new gameplay will shift more away from this and promote other areas of the game.

A lot of players have expressed their dislike at the stale drop-back tactic, 4231 formations and AI dominated defending. This is likely to be an area of gameplay that EA adjusts to promote more manual defending and will likely mean we're in for a year of tough defending mechanics.

Corners and crossing have also been very underwhelming this year, so we can expect to see this area of the game improved.

The game will continue to work on the Frostbite Engine.

Unsurprisingly, there is currently no trailer for FIFA 21 - we expect the first trailer to be shown at EA Play 2020.