"The Next Chapter of Destiny 2" awaits.

Destiny 2 Season of Arrivals is coming soon, this will lead the game into the next big wave of content for players all over the world.

Beyond Light sees us link up with the Stranger from the first Destiny, while The Drifter and Eris will have key roles in the upcoming content update.

Bungie has released a new roadmap which lays out the plan for Season of Arrivals and what players can expect.

Here's all we know so far.

With the fourth year of Destiny 2 kicks off when Beyond Light releases, there was been a lot of speculation about how Bungie is going to mix up the game.

One aspect that has been flaunted by fans and Forbes writer Paul Tassi, is the possibility of factions with the release of year four.

Similar to World of Warcraft with Alliance versus Horde, we may finally see this fantasy come to life in Destiny 2.

What side would you choose? Light or Darkness?

Check out the full stream below.

Expansion will introduce The Darkness, and take us to Europa?

It looks as though fans have established what's coming in the big expansion, and it makes for exciting news.

After being teased at the end of Shadowkeep, it looks as though The Darkness (who we've heard about since the first game launched in 2014) will finally be revealed.

It also looks as though the new area that'll be added is Europa, one of Jupiter's moons that's covered in ice.

When Will The Beyond Light Expansion Launch?

Beyond Light reintroduces The Stranger, and tells the story of the game's exo race.

We'll be heading to Europa, an icy planet, and we'll be experiencing new Stasis powers that aren't necessarily bestowed upon us by the Light.

Expect those Pyramid ships to be a big part of things, too.

Here's the gameplay trailer for Destiny 2 Beyond Light.

There's also a deluxe edition that includes season passes up to Season 15, as well as some cosmetics for £59.99.

The bundles that include season passes also offer the "No Time To Explain" exotic pulse rifle.

Shadowkeep introduced Season Passes to the Destiny 2 universe, with rewards doled out for playing the game and completing bounties.

Many fans didn't like the way it incentivised constant bounty grinding, though, and with the seasonal content changing to offer less in the way of content that can be missed, we'd expect to see big changes.

We don't know what's coming as part of the expansion, but we'd expect the following.

Titan, Warlock, and Hunter classes got some changes in Season of the Worthy, and they're likely to be rebalanced again with the next expansion.

A new damage type, Stasis, will also be added - meaning for the first time players will be able to wield new abilities granted by The Darkness.

Destiny's "sandbox" is a general way of describing how the game plays, and it'll likely be getting a hefty update over the course of Season 11 and further changes with the expansion.

The divisive mod system was reworked in Season of the Worthy, but it still promotes grinding for the ability to use seasonal mods, meaning players are still disappointed.

Beyond Light WILL feature a new raid.

While we've known for some time that pre-Shadowkeep weapons won't be able to reach higher power levels than 1060, the game's content is also being "sunsetted".

It's a huge change, with Titan and Io being removed as destinations from the base game, while Curse of Osiris and Warmind expansion areas of Mercury and Mars are also being removed.

The Leviathan Raid location is also leaving the game.

Not only are these locations being removed as explorable patrol regions, but their missions are being removed, too - that includes strike content, and raids.

Speaking of raids, the Scourge of the Past raid is also being removed, and when Beyond Light launches it'll add a raid. That means we'll have the new raid, Last Wish (from Forsaken) and Garden of Salvation (from Shadowkeep) to play.

We still don't know if Gambit or Crucible maps on the soon-to-be deleted destinations will stick around, but Gambit is still planned as a condensed event rather than the two modes it currently entails.

Bungie really undersold it, but older Destiny 2 content is going to be cycled out with the arrival of fresh expansions. While it'll be cycled in from time to time, Destiny 1 content will also be periodically added.

Considering how many fans have been desperate for a return to older content, this is huge news. This starts with the Cosmodrome returning as a selectable destination later this year, with three Destiny 1 strikes coming with it. We can't wait to battle Sepiks Prime again.

After years of fan requests, Bungie will now let players change the appearance of their gear to look like another piece.

Hopefully, it'll prevent Guardians that want the best stats from looking like a walking trash heap, and allow for some cool new in-game fashion. 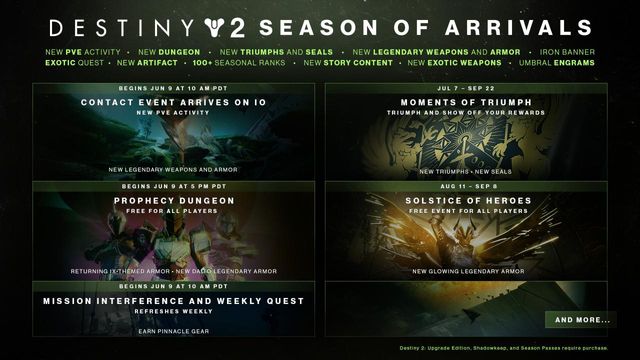 Beyond Light will release with a number of special editions available for players.

Here are the options players will have:

Bungie took us all by surprise by announcing that next year's expansion will be called The Witch Queen, and 2022's will be Lightfall.

We'll have more news on those in the coming months.