FIFA 20 TOTS So Far Review: Top 7 Ligue 1 Team Of The Season So Far Players You Need To Try Out

With the Ligue 1 TOTS coming to red player picks tomorrow, here are the Top 7 Players you should be keeping your eyes peeled for!

Team of the Season So Far has stepped up once again in FIFA 20 Ultimate Team with an awesome French Ligue 1 TOTSSF squad, available in packs now alongside the Latin America and MLS TOTSSF squads.

Here are our Top 7 picks from the Ligue 1 Team of the Season So Far squad that you should be looking to get into your squad, with player analysis on each player, the best roles and playstyles, as well as the potential prices you should look at picking them up at. 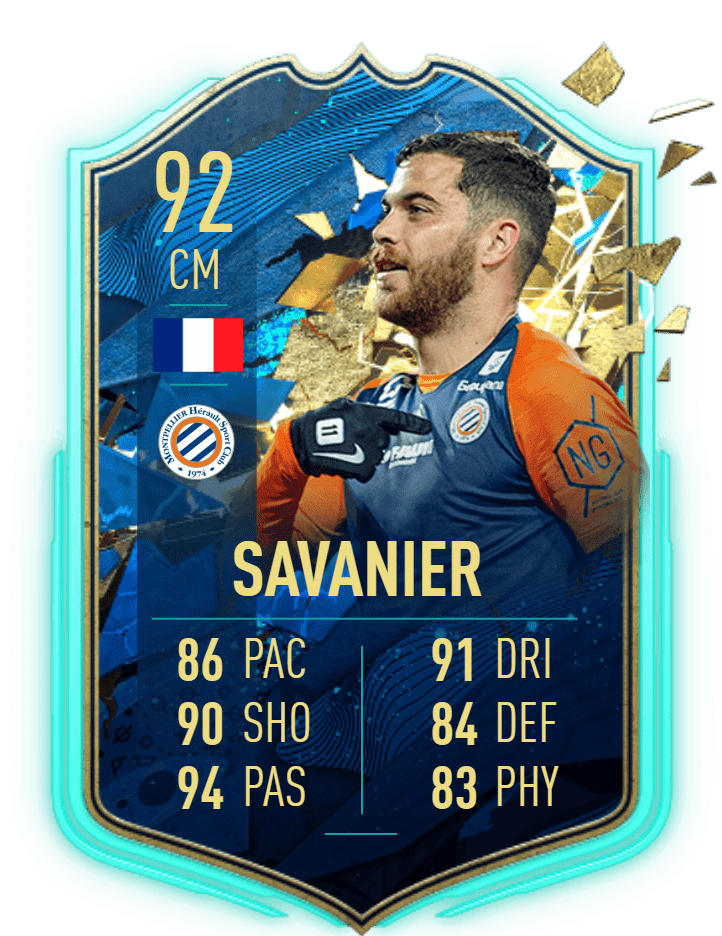 Kicking off our Ligue 1 TOTSSF picks, we have the very good value CM, with Montpellier’s Teji Savanier.

Valued currently only around the 75,000 coin mark, the French midfielder has the potential to be one of the best coin-for-coin CDMs at this late stage of the FUT calendar. With 4* Skills and Weak Foot, a shorter, but more agile 5’7” build in-game, and very well rounded stats, there’s nothing he can’t do.

When it comes to his technical attributes, his passing and dribbling stats are off the charts, with 95 Vision and Short Passing, as well as 97 Agility and 99 Balance.

What may initially put people off this card is his Pace, Defending and Physical card statistics, however, upon further inspection, he has very important in-game stats under these categories that may go unnoticed. 86 Pace actually has a hidden 92 Acceleration stat, which will make Savanier key in sprinting to intercept attacks.

His 84 Defending may look low, but is brought down by 52 Heading Accuracy, despite having 99 Interceptions, 89 Standing Tackle and 86 Sliding Tackling.

The Dutchman has had a real resurgence in recent years, with a very good season at Lyon earning him an awesome 94 rated TOTS item.

Being a 5* Skiller instantly draws attention to Depay as a desirable attacker, and with a very well rounded card, he can play anywhere across the front line.

With 96 Acceleration and Sprint Speed, as well as 91 Strength, he is well suited to playing a physical role in a team, perhaps as a wide CAM or winger taking on opposition full backs to create chances in the box. In these roles, his 93 Passing, comprised of 97 Vision, 95 Crossing and 91 Short Passing will be vital in helping create and assist attacking moves.

In and around the box, his Outside of the Foot Shot Trait (which is useful considering he only has 3* Weak Foot), alongside 97 Positioning, 99 Shot Power and 97 Curve will come into effect well.

Renato Sanches is, without doubt, the most popular midfield item in the Ligue 1 TOTS selection, being the 10th highest player in the Total In-Game stats charts.

What this means, in a nutshell, is that Renato Sanches is one of the most versatile, well-rounded cards in FIFA 20 Ultimate Team, and with links between the French Ligue, and a Portuguese link to Cristiano Ronaldo, he’s a key component in top tier meta teams.

We could spend all day going over all the stats that make Renato Sanches one of the best central midfielders in the game, but it’s easier to just state the areas that he isn’t as prolific in. With only his 77 Crossing and 76 Curve being the only in-game stats lower than 80, it’s clear to see that there’s hardly an area that Sanches doesn’t excel in.

The only slight improvement we would make would be to his defensive stats, through the use of a Shadow, or Anchor chemistry style, just to boost his Interceptions and Tackling statistics, to make him fully able to play a defensive role with ease.

Mr Position Change, Youcef Atal has had a very odd year in FUT, with cards in a whole host of positions, starting off as a RB, then LW, then ST, now RW. It’s safe to say he’s been around the pitch, and with his incredible 92 rated blue card, he can play pretty much any role that you need him to.

For those that have used Atal this year, you’ll understand how well his cards play in-game. With his sheer pace and agility, coupled with 4* Skills and a vital 5* Weak Foot, as well as having decent defending and physicality, Atal has the ability to play all around the pitch.

His 99 Acceleration, 94 Agility, 92 Balance and 98 Dribbling statistics are key for attacking roles this year, with quick turns and drag backs almost being the only way to break down compact defences. Furthermore, with his 5* Weak Foot, the ability to turn onto either foot is of major importance and can be the difference to scoring or missing a number of chances.

While he may be quite hard to link into teams, if you’re able to get him in with some of the other players from the list, definitely consider making him a focal point of your attacks going forward. 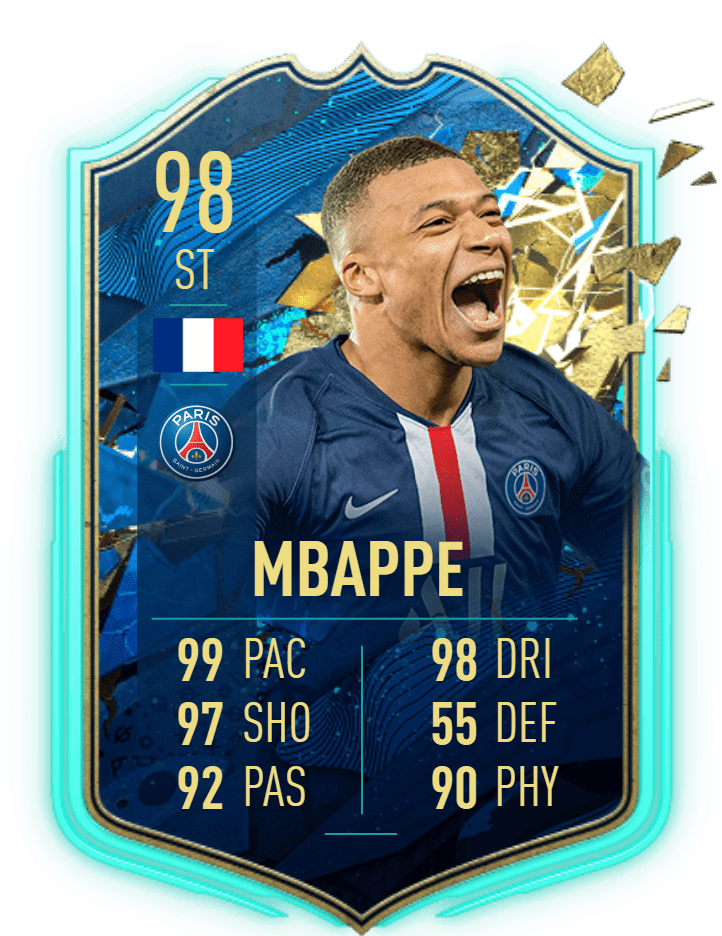 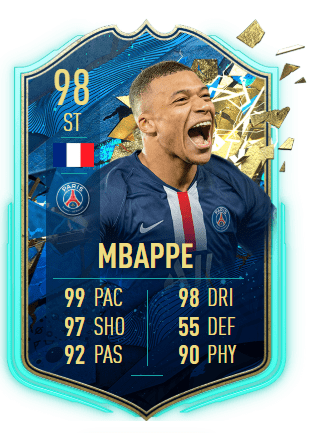 Now, moving into the Top 3, it may be pretty obvious as to who we’ll have selected, as I’m sure you’re aware of who the true top dogs are in the Ligue 1 TOTSSF.

Nevertheless, Mbappe has to be in the selection as one of the players you have to consider picking up, not just from the Ligue 1 TOTS, but out of the entire pool of attacking players on offer in FUT 20.

At this stage of the year, I’m sure many of you reading this will have experienced Mbappe in some capacity, be it using him yourself, or facing him in either Division Rivals or FUT Champs. We all know what makes this card so special.

The 99 Pace, 99 Agility, the Strength, the Finishing ability, the 5* Skill Moves, the Outside Foot Shot and Finesse Shot Traits that make his shooting so broken. He’s up there as one of the top attackers in the game, and with strong links to both of the upcoming attackers, a formidable attacking trio can be formed.

Onto the 2nd best pick from the league, and the 2nd most expensive non-icon card in the game, with everyone’s favourite striker that they love to hate in FIFA 20, Wissam Ben Yedder.

If you’ve somehow managed to avoid playing the 5’7” menace in FIFA this year, you’ll luckily not have experienced his 5* Weak Foot, broken drag backs with 99 Agility and Balance, unbelievable shooting and all-round glitchiness.

In the last 10 years of FUT, I can’t recall a player being so prominent at the top end of the meta throughout the entire year, from base cards to in-forms to promo cards, all the way up to the very best TOTY/TOTSSF items.

Ben Yedder this year is the embodiment of the perfect FIFA 20 striker, with a low centre of gravity, 5* Weak Foot, maxed out agility, balance and acceleration, and broken shooting with 99 Positioning and 99 Finishing.

If you’re lucky enough to be able to get him into your teams, then do let us know how many players you make rage quit with this little monster!

Finally, it would be a Top 7 Ligue 1 TOTS piece if the main man Neymar wasn’t sitting at the top of the pile.

Arguably the most meta attacker in FUT this year, Neymar has it all and is shown by him being the single most expensive non-icon card available on the market at the current time, at a whopping 6.1 million coins on PS4.

Neymar’s notoriously been up there as one of the best FUT players because of his 5*/5* Skills and Weak Foot combination, as well as all the key dribbling and shooting statistics.

There has been a little debate over the best position in-game for Neymar’s items, with some preferring him as a wide player over a central CAM or ST role, however, with this card’s unreal Agility, Shooting and the obvious 5* Weak Foot and Skills combination, for me, he has to be played centrally, to both create and score chances at will.