Everything you need to know about People Can Fly's third-person shooter/RPG hybrid.

Outriders, the new co-op loot shooter from developers People Can Fly and publisher Square Enix, is coming out this year, in just a few months at the time of writing.

A third-person shooter with a heavy focus on RPG elements, it sounds like Destiny - but it might surprise you. Here's why!

Looking to play Outriders on PC? Good news – the game's system requirements aren't as high as you may have imagined.

Check them out below: 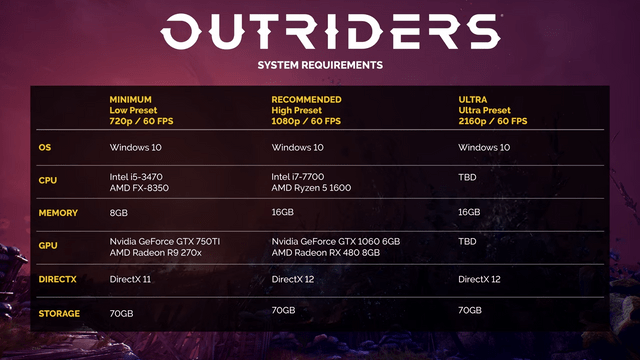 PC, console, and Stadia players can all enjoy cross-play, too.

Coming from the team that bought you Gears of War: Judgement and Bulletstorm, Outriders is a third-person shooter which adds classes, social hubs, dialogue trees and more.

Yep, that does sound a fair bit like Destiny, but Outriders differs in that it is influenced by Polish folklore. Telling the story of a space expedition gone awry, the game has a set storyline - so there's no emphasis on grinding.

Once the campaign is over, it's over (but you can replay missions), meaning it's actually quite refreshing in the day and age of every game fighting for our attention all the time.

One of the more encouraging ways the game sets itself apart from something like Destiny is that all of its lore is accessible from in-game menus at all times. In fact, it sounds similar to something like Mass Effect's Codex entries.

The game has been delayed to April 1.

It was previously slated for February 25.

Not only will the game be coming to PlayStation 4, Xbox One, and PC, but Outriders is confirmed to be a PlayStation 5 and Xbox Series X title, too. 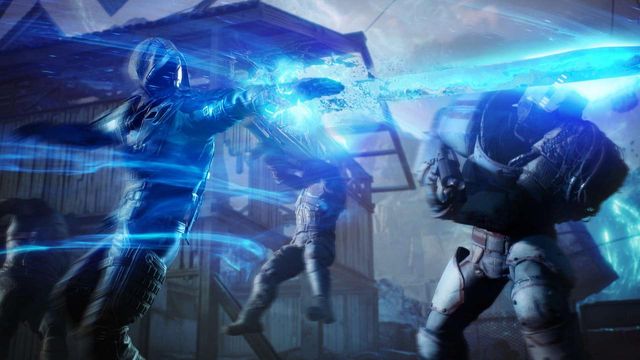 Are we sure this isn't a Destiny update or something? (Source: Square Enix)

On Xbox One, and therefore the Xbox Series X, as well as PS4 versions of Outriders can be pre-ordered for £54.99.

The game's demo will drop on February 25 and will offer a few hours of the game.

All four character classes will be available,e and progress will transfer over.

“We believe it’s important that players get to experience a new IP like Outriders before release, so that you can decide for yourselves whether the game is something you wish to pre-order, purchase or play,” developer People Can Fly noted.

Check out the latest trailer, dubbed "Mantras of Survival", below:

Good news, we've got a sizeable deep dive courtesy of the following video. Check it out.

Multiple outlets have been able to provide preview coverage of the game, and you can expect damage numbers popping out of enemies and loot to earn just as you would in something similar.

There's also a cover system, so you can expect Division-style firefights, but each class also has a skill tree with vastly different choices playing out as you tailor your character.

The game is also tackling difficulty a little differently, as players can move up and down "world tiers" with scaling rewards at any time. So, if it's too easy, you can ratchet things up for a tougher fight and better loot. If things get too tough, you can drop it down again.

The team is also committed to accessibility, and are adding high contrast mode, colour blind mode, subtitles and more.

After the second Outrider's Broadcast video, we now know that there will be multiple settlements to explore, as well as a customisable mobile base of sorts.

Visual customisation is done at your base, and you can move weapons and gear between your roster of characters.

We also know that the game will offer side quests with entirely new areas, and that the soundtrack is coming from Inon Zur - the man behind the soundtracks of Fallout 3 and 4, as well as New Vegas.