FIFA 20 TOTS So Far Review: Top 5 Serie A Team Of The Season So Far Players You Need To Try Out

The Serie A TOTSSF is stacked with tonnes of top tier talent, here are the Top 5 players you should be looking to get your hands on from the squad!

Team of the Season So Far has hit the Italian Serie A in FIFA 20 Ultimate Team, with the release of an awesome Serie A TOTSSF squad, available in packs now alongside the Eredivisie and CSL TOTSSF.

Here are our Top 5 picks from the Serie A TOTSSF squad that you should be looking to get into your squad, with player analysis on each player, the best roles and playstyles, as well as the potential prices you should look at picking them up at.

It’s worth noting that we’ve decided to leave TOTSSF Cristiano Ronaldo out of our selection, due to him already having a TOTY item that matches his new cards’ rating. 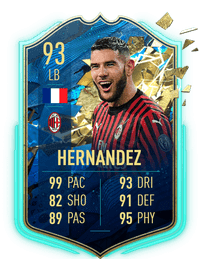 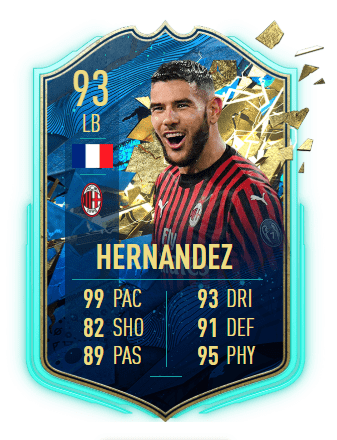 Starting off our Serie A top 5, we have the French youngster, AC Milan’s Theo Hernandez, who looks to be one of the best full backs FIFA 20 has seen.

With 99 Pace, 93 Dribbling, 91 Defending and 95 Physical, he has the perfect build to be one of the best full backs this year, with everything needed for a full back. His 96 Acceleration, 99 Sprint Speed, when coupled with 95 Agility and 98 Strength, make for a perfect build when defending pacey wingers.

His 91 Defending consists of 98 Standing and 99 Sliding Tackling, which are top tier statistics, and should you find Theo in attacking areas, his 99 Crossing and 99 Short Passing will serve you well in helping to create chances from out wide.

If you’re looking at picking Hernandez up, be sure to apply a Guardian chemistry style, as this will improve his Defensive Awareness to 93 from 78, which is a major boost, and will help him become an even more solid defensive powerhouse. 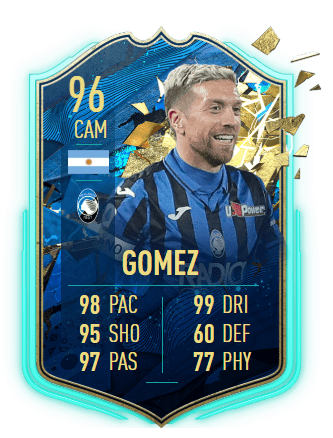 Our 2nd choice from the Serie A TOTSSF, and the first of an Argentina trifecta in attack, is the 5’5” Atalanta captain, Alejandro Gomez.

While not the biggest presence on the field, the tricky playmaker has the perfect build for FIFA 20, with 99 Acceleration, 99 Agility, 99 Balance 97 Ball Control and 97 Dribbling in game, coupled with his very low centre of gravity, making him one of the fastest, most responsive players this year in FUT.

His superior dribbling is the main selling point of this card, however his shooting and playmaking abilities aren’t to be overlooked! With 4* Weak Foot, as well as 96 Finishing and Long Shots, and 92 Shot Power, Gomez can finish on either foot with relative ease, in and around the 18 yard box. With 97 Passing including 99 Vision, 97 Short Passing and 94 Curve, Gomez excels both on the end of, and in the build up to attacking situations.

Being a little shorter, there are questions to be raised about his ability to play a central role, as with only 64 Strength, he can be bullied off the ball by most CDMs and CBs. For this reason, his best position would be as a LAM/RAM, playing out wide, utilising his pace and technical ability to beat full backs to fashion chances for himself, or other attacking players.

Our 3rd top pick from the Serie A TOTSSF squad has to be Lazio’s general in midfield, the big Serbian, Sergej Milinkovic-Savic.

With a 94 rating, the 6’3” midfielder is the perfect box-to-box midfielder for the Serie A, with all bases from defending to attacking covered in a perfectly well rounded card.

At the top end of the pitch, a 4* 4* combination of Skill Moves and Weak Foot are incredibly useful, and with 91 Positioning, 92 Finishing, 95 Shot Power and 92 Long Shots, you can bet that he’ll have the ability to finish chances when he’s presented with opportunities.

Defensively, his 6’3” frame in game, coupled with 90 Interceptions, 89 Standing Tackling, 97 Stamina and 99 Strength make him a strong defensive force, able to bully most shorter, weaker attackers.

The 2nd Argentinian out of our selection, and a top 2 pick from the Serie A TOTSSF squad, has to be the 94 rated Paulo Dybala card.

While not the highest rated out of the selection, this card has received an all-important Weak Foot boost to 4*, and when coupled with key traits such as the Finesse Shot and Outside of the Foot Shot traits, Dybala simply cannot be ignored.

It’s no secret that Dybala has always been one of the top tier cards in FUT, with his uncanny dribbling ability and unreal shooting attributes. This TOTSSF card takes it to the next level. His dribbling statistics go through the roof, with 99 Agility, 92 Balance, 99 Ball Control and 98 Dribbling.

Shooting wise, 90 Finishing, 90 Shot Power, 97 Long Shots and 99 Volleys all come into play, and with his improved 4* Weak Foot, he now has a greater ability to shoot on his weaker right foot, making him even less predictable to defend against.

Finally, his passing stats make him the complete forward, with 98 Vision, 98 Short Passing and 99 Curve, meaning he can play a slightly deeper attacking midfield role if you want him to.

The ideal chemistry style for Dybala has to be Hawk, to help increase the physical side of his game, boosting his Jumping and Aggression, but mainly giving him a small strength boost, which is much needed. 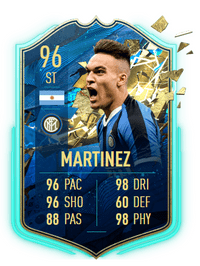 Our final choice for the Serie A TOTSSF, outside of the obvious Cristiano Ronaldo choice, who we’ve excluded due to having a TOTY item, has to be the unbelievable Lautaro Martinez and his 96, yes 96 rated TOTSSF card.

In a nutshell, 96 Pace, 96 Shooting, 98 Dribbling and 98 Physical make the hot prospect one of the best strikers in FUT this year, and his in-games tell the same story.

96 Acceleration, 96 Sprint Speed, 99 Jumping, 99 Strength and 99 Aggression make him one of the fastest, yet strongest strikers this year. 99 Agility, 93 Reactions, 98 Ball Control and 98 Dribbling make him super agile and responsive both with and without the ball.

99 Positioning, 99 Finishing and 98 Shot Power, as well as a 4* Weak Foot, allows him to be clinical in the box, with a Power Header trait, coupled with 99 Jumping allowing him to even utilise headers, a somewhat ineffective area of the FUT 20 meta.

There’s no doubt that Martinez is up there in terms of the end-game FIFA 20 strikers, he ticks all the boxes. If a chemistry style were needed, it would be an Engine, just to boost his Pace to 99, and to get a big +10 boost to his Balance.