FIFA 20 TOTS So Far Review: Top 3 CSL Of The Season So Far Players You Need To Try Out

With the CSL newly released into packs, here are the Top 3 players we'd recommend trying out from the TOTSSF squad!

The Chinese Super League Team of the Season So Far has been released into FIFA 20 Ultimate Team to accompany the Serie A TOTSSF, with an awesome squad of 11 released into packs.

Here are the Top 3 Players from the CSL TOTSSF that you need to try out in FUT 20.

With 11 new players released into FUT 20 from the Chinese Super League TOTSSF, here are the top 3 players that you should try out! 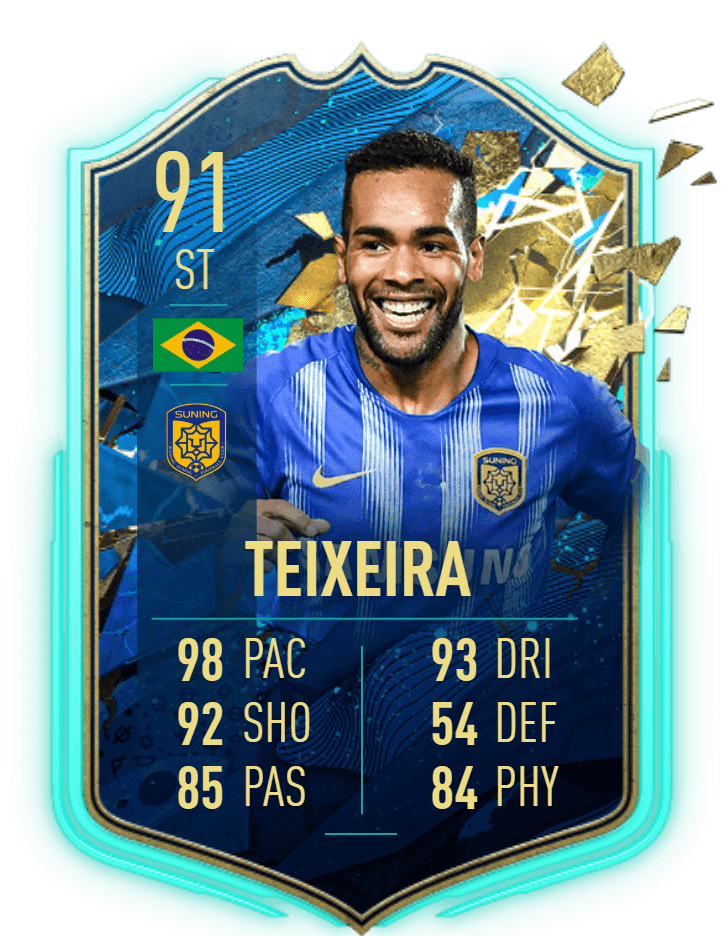 First up in our CSL selection is the pacey Brazilian, Alex Teixeira, who’s 4* Skill and Weak Foot combination make him a top attacker suited to FIFA 20’s meta.

His 99 Acceleration, 99 Agility, 4* Skills and 4* Weak Foot makes the Jiangsu Suning forward a very enticing option for players in FUT, with his quick turns and bursts of pace being a key in breaking down defences this year. With 96 Positioning, 93 Finishing and 94 Volleys, in attacking situations, you can count on Alex Teixeira to finish most chances with ease.

With his pace, and 99 Stamina, you can move Teixeira to the wing if you wish, bursting down the line to create chances from wide, however, we’d recommend keeping him central to get the most out of his finishing ability.

One of the most popular players in FUT history, Hulk has one of his best-ever cards in FUT, with an unbelievable 94 rated item, with 5 of his card stats rated 92 or higher!

As an inside forward, cutting inside onto his left foot from the right-hand side, Hulk looks to be one of the best cards in FUT. His 97 shooting is obviously a key factor, with 92 Finishing, 99 Shot Power and 99 Long Shots, however the inclusion of the Finesse Shot Trait majorly helps him out in and around the box.

Obviously, another big draw to this card is the combination of pace, with “Hulk-like” physicality. Possessing 93 Acceleration with 99 Strength and 91 Aggression makes the Shanghai SIPG winger very difficult to push off the ball, allowing him to bully weaker full backs and create chances for himself or teammates.

In terms of roles, Hulk would be very suited to the default RW role, cutting inside onto his left foot where possible to unleash a rocket of a shot. An Engine chemistry style is definitely recommended to boost his Agility and Balance a little.

Finally, the top player we’d recommend trying out, if you can, from the Chinese Super League TOTSSF, has to be the 95 CM from Guangzhou Evergrande, Paulinho.

With 16 in-game stats being 90 rated or higher, and only his Crossing and Curve stats below an 80, Paulinho well and truly stakes his claim to being one of the best all round midfielders that FUT 20 has to offer.

Moving a little further back, his well rounded defensive stats with 89 Interceptions and 88 Standing Tackling are more than enough to play him as a CDM, with 99 Stamina allowing him to get up and down the pitch for the full 90 minutes.

With a Shadow chemistry style applied, Paulinho really can play whatever role you need him to fulfill in the midfield, be it as a pure defensive CDM, a box to box midfielder, or a playmaker behind the attacker. With strong links to Hulk, Renato Augusto, Oscar, Johnathan and Alex Teixeira from the CSL TOTSSF, he’s super easy to link into teams as well!