FIFA 20 TOTS So Far Review: Top 5 Bundesliga Team Of The Season So Far Players You Need To Try Out

MattFUTTrading takes us through all the players you should be looking to pick up from the Bundesliga TOTSSF!

Team of the Season So Far has gone German in FIFA 20 Ultimate Team, with the release of an awesome Bundesliga TOTSSF squad, available in packs now alongside the Liga NOS TOTSSF.

Here are our Top 5 picks from the Bundesliga TOTSSF squad that you should be looking to get into your squad, with player analysis on each player, the best roles and playstyles, as well as the potential prices you should look at picking them up at. 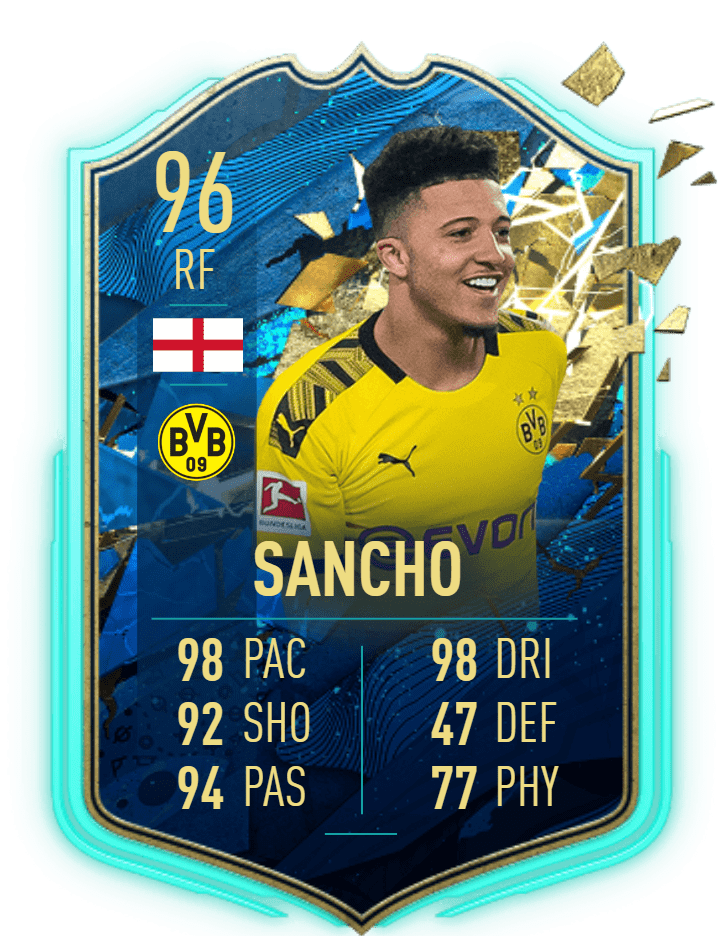 Starting off our Bundesliga top five, we have the English wonderkid himself -Jadon Sancho.

Being a 5* skiller, with a 98 Pace and Dribbling combination, including 99 Agility and 98 Balance, he is very well set as a typical winger for FUT 20’s meta.

99 Acceleration is massively important for turning quickly and bursting away from opposing defenders, and with 98 Stamina, he’ll be able to continue his quick bursts of pace throughout the full 90 minutes.

In terms of roles, Sancho is capable of playing any form of attacking role outside of an out and out striker. Playing as a CAM/LAM/RAM in a 4231 would be your best bet, or as a RW/LW in a formation that requires wingers, allowing Jadon to get into attacking areas and create chances.

Our second pick is another Dortmund wonderkid, the Norwegian superstar Erling Haland, who’s had an incredible year. Starting off as a 73 rated silver for RB Salzburg, he's now a 95 rated TOTSSF item at Dortmund.

This card can be perfectly summarised by looking at his card stats: 97 Pace, Shooting and Physical - he’s a pure powerhouse.

Being 6’4”, you’d expect Haland to be a little slow and clunky, however with 94 Acceleration, 86 Agility and 84 Balance, he’s actually very nimble for a big man (with an Engine chemistry style) he feels very responsive in-game.

Another positive to add is his slight boost from a 3* to a 4* Weak Foot, which helps out in and around the box.

In terms of roles, for Haland it’s simple, he should be leading the line, bullying centre-halves with his pace and strength, finishing chances when the ball gets played into him. Haland only has 88 stamina, so you may notice him tailing off towards the end of the game, so if you have other strikers to bring off the bench, it may be a good idea to utilise them.

Our third pick for the Bundesliga TOTSSF and the final Dortmund pick of the selection has to be Marco Reus’ 95 rated card, who yet again looks to be one of the more meta attacking players this year in FUT.

While not the highest-rated Reus card, compared to previous editions of FUT, this years’ version possesses all the top stats needed from an attacking midfielder.

Reus has 93 Finishing, 95 Shot Power, 93 Long Shots and 97 Volleys, accompanied by the Outside Foot Shot and Finesse Shot traits; you can guarantee that Reus will be clinical in and around the box.

His passing stats are also key to making him a top-quality attacking midfielder, making him perfect for quick, tiki-taka style passing moves around the opposition’s box.

There’s been some debate for the best position to play Reus, with some arguing that he’s best suited as a striker, however, his role as an attacking midfielder shouldn’t be overlooked with his passing and ability to link-up play.

CAM in a 4231 or 41212 looks to be the perfect role for Reus to get the best out of his playmaking and finishing skillset.

Our next pick goes to the lethal 24-year-old, Timo Werner, who’s been attracting plenty of interest from top clubs over the past year, with an unreal 97 rated TOTSSF item.

99 Pace, 98 Shooting, 96 Dribbling are the key stats here. Werner has the ability to go for the full 90 minutes at pretty much full capacity, making him a real asset to any side.

With 99 Acceleration and 99 Sprint Speed, you have the perfect combination of pace, finishing and positioning. With an Artist chemistry style, his dribbling stats get boosted, even more, taking his Agility and Balance to 99 and 93 respectively.

While Werner is a truly prolific goal scorer in FUT, an effort needs to be made to fully utilise his insane pace, so playing him out wide as an RW/RAM might be a potential move; allowing him to burst down the wing constantly during games.

If you do want to play him more centrally, make sure you have players around him to bounce the ball around with, as he may become isolated if you can’t get him in behind.

Our final pick has to go to the main man from the team, Robert Lewandowski and his first-ever 99 rated card in FUT.

As you’d expect from a 99 rated item, his stats are nuts, with all 5 of his important card stats being 94 or above. Lewandowski has a total of 19 in-game stats being 95 rated or higher, simply incredible!

94 Pace, 96 Jumping, 96 Strength along with 4* Skills and a 4* Weak Foot make for an absolute tank of an attacking player.

As you can imagine, there’s only 1 place to play Lewandowski, at the top of the team as the main goalscoring threat. With an Engine, you get an extra five 99 rated in-game stats (including 99 pace) so it’s recommended, if you pick him up, to get him set with that chemistry style.