FIFA 20 Liga NOS TOTS So Far Objectives: How To Unlock Jeremy Mathieu's Team Of The Season Cards FAST And The Best Cards To Use

A new Liga NOS objective has arrived, here's how to complete it fast!

The Liga NOS Team of the Season So Far has been released into FIFA 20 Ultimate Team to accompany the Bundesliga TOTSSF, with an awesome squad of 11 released into packs, as well as a Jeremy Mathieu Season Objective available to complete.

Here is all the information for Jeremy Mathieu’s 91 rated TOTSSF Season Objective, as well as the Top 3 Players from the Liga NOS TOTSSF that you need to try out in FUT 20.

With 11 new players released into FUT 20 from the Liga NOS TOTSSF, here are the top 3 players that you should try out! 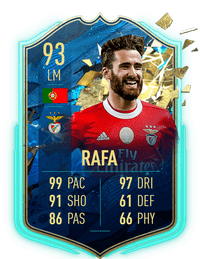 The 99 Pace Benfica winger looks to be a solid pickup from the Liga NOS TOTSSF selection, possessing all the necessary stats to make him a top attacking player in FUT 20.

The 99 pace is a clear selling point, with a 97 Acceleration, 99 Sprint Speed split, as well as 99 Agility, 99 Balance and 98 Dribbling to accompany his pure speed in game.

4* Skills and Weak Foot make him a tricky player to tie down, and with 93 Finishing and 96 Shot Power, you can be sure that he’ll be able to finish chances in and around the box.

In terms of links, you’re spoilt for choice, with 91 Ruben Dias and 94 Pizzi both offering perfect links from the Liga NOS TOTSSF, with other strong links including a strong Benfica midfield of 92 Gabriel and 92 Taarabt, as well as the Community TOTSSF inclusions, 89 Grimaldo and 88 Pepe.

Our 2nd selection from the Liga NOS TOTSSF squad that you have to get your hands on is the simply unreal 92 Gabriel, who looks to be one of the best defensive-minded midfielders in FUT currently.

Just off his face card stats of 90 Passing, 92 Defending, 93 Dribbling and 95 Physical, you can tell he’s going to be a perfect CDM card, but being 6’2”, with 5* Weak Foot, medium attacking and high defensive work rate, he really does take it to the next level.

His in-game stats, as you can imagine, are superb, with 96 Interceptions, 90 Defensive Awareness, 93 Standing Tackling, 93 Strength, 99 Aggression and 95 Stamina making up the defensive portion of the card. 91 Vision, 92 Short Passing and 97 Long Passing make him a worthy playmaker and ball-playing midfielder, with 90 Reactions, 96 Ball Control and 95 Dribbling making him a more than capable dribbler of the ball.

The only slight downside to this card would be his 76 Agility and 78 Balance combination, however, this can be sorted by applying an Engine chemistry style, taking him to 81 and 88 stats respectively.

The final player to talk about from the Liga NOS TOTSSF selection is an easy one, with 94 Alex Telles staking his claim as one of the top LBs in FUT 20, with an exceptionally well-rounded card.

With only a handful of in-game stats below a 90 rating, Telles really is the perfect LB for this year, and with a number of top tier Brazilian links, he’s a top player to get into your team.

Starting off with his pace, you have 94 Acceleration and 96 Sprint Speed, which is a very good split. His passing is some of the best in the game for a LB, with 99 Crossing, 95 Short Passing, 98 Long Passing and 98 Curve, making through balls down the line very effective with him. Defensively he can do no wrong, with 94 Interceptions, 94 Defensive Awareness, 95 Standing Tackling and 92 Sliding Tackling.

The only slight downside to this card would be his 78 Strength, so it’s recommended to apply an Anchor/Sentinel chemistry style to boost this up slightly, to make him a true defensive powerhouse.

Celebrating his inclusion in the Liga NOS TOTSSF, Jeremy Mathieu is available in Season Objectives until 6pm on Monday, May 25th.

With multiple objectives to complete in Rivals, in order to complete this in the quickest time possible, the best idea would be to rock your best team if possible, bringing some players that fit more specific requirements off the bench, such as French/Liga NOS players with 80 physical.