Animal Crossing New Horizons: How To Get Redd To Appear On Your Island

Here's why Redd is missing.

Animal Crossing New Horizons players have been trying to solve the mystery of Redd, a character added post-launch who seems to be more elusive than he should be.

The art dealer arrives by boat on players' islands, often offering forgeries amidst his stock. Many players have speculated that the shady character has gotten his comeuppance, or that Tom Nook has dissuaded him from returning.

If you're wondering what the red-furred rapscallion is, we finally have some information.

How to get Redd to appear on your island

According to Ninji, a reliable data miner of the game, Redd is part of a spawn cycle that also includes the following NPCs:

According to the following tweet, you're only guaranteed Saharah, Kicks, or Leif on weekdays which means you get two other chances at Gulliver, Label, CJ, Flick or Redd. 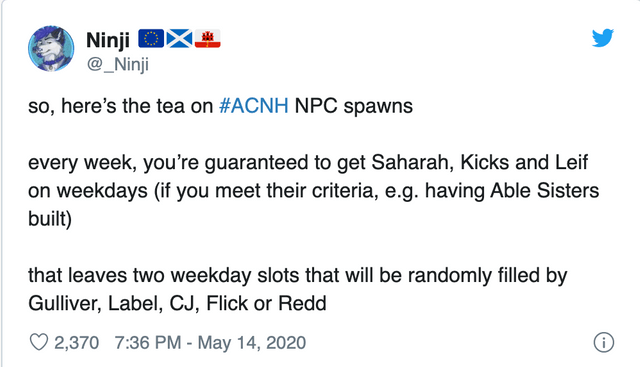 Following this logic, if you see Gulliver (for example) on your island one day, Redd won't also appear.

That's a bit of a tough pill for art-hunting islanders to swallow, but there is a silver lining: according to Ninji, a "bad luck" mechanic makes it more likely that you'll encounter Redd the next week if he doesn't appear in an entire week.

In any case, keep those bells handy if you want to fill out your island's museum.