Fallout 76 is getting its first wave of seasonal content. Here's what's included.

After Fallout 76's big Wastelanders update finally arrived, it seemed the perfect opportunity to expand on the vast world of Appalachia.

With new events, quests, perks and more being added over the course of the next three seasons (taking us all the way to 2021), there's plenty to look forward to for any vault dwellers.

Here's everything coming in Season 1: The Legendary Run.

Fallout fans have had a rough time with Fallout 76, but even this season has been no picnic.

For one, the game's ammo converter that lets you convert ammo into ammo for alternative weaponry. That's a welcome addition, but the machine requiring you to throw small amounts of ammo in at a time, paired with a slow-loading menu screen, makes it feel arduous.

Then there are the seasonal rewards pass themselves. Redditor maybe-some-thyme calculated that you'll need about 220,000 S.C.O.R.E points to max out the pass.

That's a lot, but it's even trickier when you consider completing every single daily and weekly challenge will earn you 215,000 - so you could live and breathe Fallout 76 and still not get all of the rewards.

The new season will begin on June 30th 2020 and will run through until mid-September.

The update is available on all Fallout 76 platforms including PS4, Xbox One and PC.

From the makers of Unstoppables Shindig, Blast Radius, and Catch the Commie comes The Legendary Run.

The Legendary Run is Fallout 76’s first Season and features a boardgame-inspired theme.

As Captain Cosmos, you will race the evil Dr. Zorbo across the galaxy. Your progression through the Season will be represented as pieces on a game board.

The Legendary run will run for 10 weeks with themes, rewards and challenges that refresh each season.

Each season will bring new progression of 100 ranks to reach, as well as exciting rewards like Atoms, Perk Card packs and unique cosmetics.

By completing daily and weekly challenges, you'll earn S.C.O.R.E which will allow you to rank up and claim a new-reward every time you do.

Challenges have been revamped and made easier to help you rank up faster - you'll be rewarded for things you already do (lifetime challenges have not been updated).

Rewards are available for every level, including a special reward every 10 levels (and some special numbers like 76).

You will also receive the following rewards for ranking up:

The update is completely free and requires no additional purchases.

However, players can skip ranks for 150 Atoms - available from 14th July. 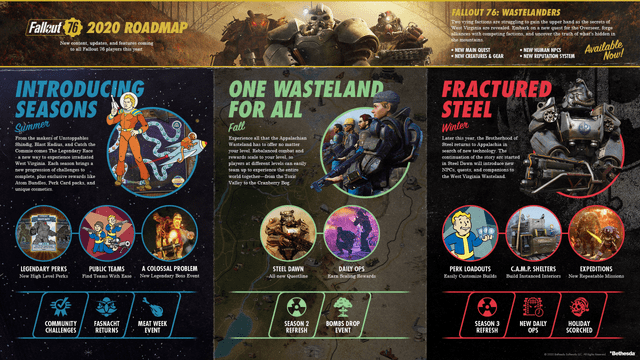 One of the main changes will be a new seasonal scoring system, similar to something like Fortnite's battle pass. Players will complete challenges to earn SCORE points and move around a boardgame inspired reward track called The Legendary Run.

According to Bethesda, “Challenges will be less complicated and easier to complete, typically involving activities players would complete by playing Fallout 76 as they normally would.”

The top tier is the "Captain Cosmos Dark Matter Power Armor Paint", but you can see all the rewards here.

With this being the introduction to seasons, expect things to ramp up – with a new boss event coming, as well as a "Public Teams" system to help you find friends to fight them.

We're also curious about "Legendary Perks", which could shift the tide of battle in your favour.

Fallout 76 Blood Eagle Locations: Where To Find The Hostile Faction