A new ring-based battle system is being introduced to Paper Mario The Origami King - here's our combat guide!

Paper Mario games have been well known for their combat system and in Paper Mario The Origami King, the turn-based fighting has been transformed to a 360° ring-based battle system.

This new puzzle-based environment now requires players to think tactically about how they execute their moves and how they attack.

Here's what we know about the combat system in Paper Mario The Origami King.

Where in previous games, it has been a 2D turn-based battle, The Origami King is now introducing a 360° puzzle-based format.

In battle, line up scattered enemies and plan your attack to maximize damage - you'll require both puzzle-solving skills and a quick wit.

The Battle Ring System is a 360° dynamic fighting arena that requires Mario to line up his opponents as effectively as possible.

Moving the rings will allow you to line up enemies in succession and chain attacks. 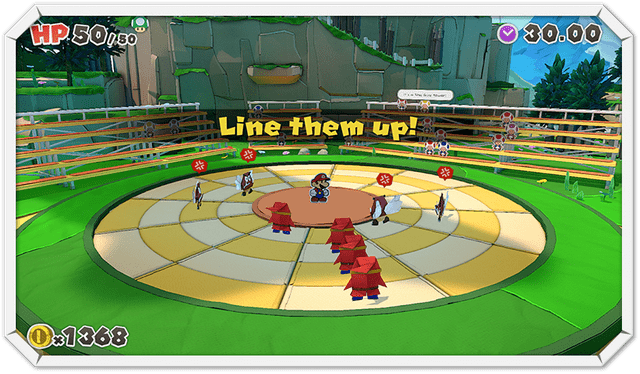 By lining up opponents, Mario will receive a power-up bonus!

You only have 20 seconds and two moves to get your affairs in order. Ultimately, there will be battles where you cannot align all enemies up and will need to take more than one turn.

Mario can also use items at the beginning of a round to give him more health, increase the allotted time or grant Mario bonuses in attack or defence.

During a fight, you'll have access to different methods of attack; your starting move will be the jump, which will work on most enemies.

When executing this move, you will be able to execute a 'Stylish Move' also known as an 'Action Command' to do extra damage - a Stylish Move requires you to time your jump and press A at the right time. 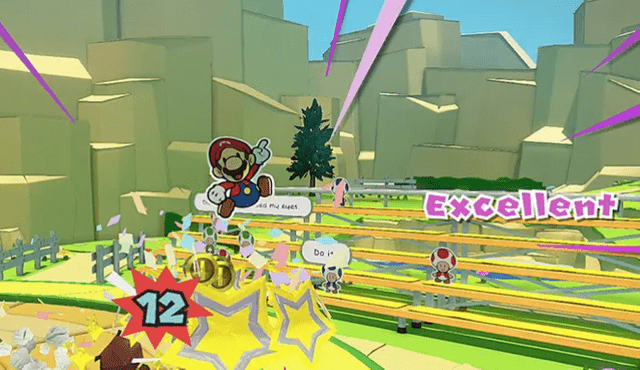 Depending on how this new combat system has been made, Mario will either execute multiple jumps on the same target depending on how many times you hit a Stylish Move or it will simply do more damage than normal.

If you do fail your move, it means enemies will likely get to all take turns pummeling you.

This is also possible with your Hammer, which is acquired later on in the game.

The new '1000 fold arms' mechanic is also reportedly used in battle and will likely be part of a special moveset.

Toads that you collect in the game will also aid you in a battle for a price.

Read More: Paper Mario: The Origami King: How To Attack And Do More Damage - How To Do A Stylish Move

Defending is just as important as attacking in this game. When playing you can lessen the damage taken or even perform a counter-attack in response.

A Superguard move may be present in the new game, that allows a player to block all damage from an opponent and execute a counter-attack. To do this, a player must press B at the exact moment an enemy's attack is about to hit.

It's a high risk-high reward manoeuvre and requires practice to perfect.

In past games, players could team up with characters they meet along their adventure.

While it's unconfirmed whether you will have the ability to partner with other characters (other than Olivia) these partners will also be usable in fights and will get their own turn.

They also come with unique abilities that can help with your attacking and defensive strategies.

Special Moves have yet to be confirmed in this, neither has the 'Showstopper' ability. These are unique moves that require Mario to execute a set of commands and display good timing, granting more damage.