This summer will see one of the most beloved Mario spin-off titles return, here's everything you need to know!

The Nintendo Switch continues to impress with its catalogue of high-quality titles and upcoming releases.

This is continued with the announcement of a new Mario adventure in the form of Paper Mario: The Origami King.

Paper Mario has always been one of the most successful Mario inspired games that Nintendo has ever introduced.

So fans are certainly excited about the upcoming release which is arriving sooner than expected!

Let's dive into everything you need to know about Paper Mario The Origami King!

As announced by Nintendo via the official Nintendo store listing, Paper Mario The Origami King is going to release on July 17, 2020!

Since this is a first-party Nintendo title, this is only going to playable on the Nintendo Switch! 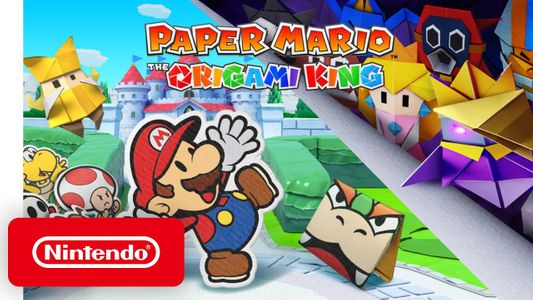 Check out an in-depth look at the gameplay of the new game right here.

This is the official announcement trailer.

What Is Paper Mario?

Paper Mario is a game that holds action-adventure and RPG elements.

You play as Mario and in most games are tasked with saving Peach from an unknown enemy. You have the ability to play as other guests from the Mario universe such as Bowser, Luigi, Peach and more.

Along your travels, you will encounter characters that you can team up with as you explore the world.

Being a Paper Mario game, it introduces paper-like mechanics that are required to solve puzzles such as turning into a paper aeroplane to travel across areas of the world.

During your adventure, you'll also come across enemies that you will do battle with, in a turn-based style.

This will require Mario to take turns using an arsenal of tools to fight and block his opponent's attacks.

The official Nintendo site features all the content related to this new Paper Mario game, below is what we know so far about the story!

"The kingdom has been ravaged by an origami menace! Join Mario and his new partner, Olivia, as they team up with unlikely allies like Bowser and the Toads to battle evil Folded Soldiers."

"Try to free Princess Peach’s castle from the clutches of King Olly in this comedy-filled adventure, only on the Nintendo Switch system."

The devious King Olly has transformed Princess Peach into origami, uprooted her castle and sealed it shut with magical paper streamers.

Olivia appears to be Mario's companion in this game and looks very similar to Princess Peach. Mario must travel across the world and find the ends of 5 massive streamers.

Some of the environments will include a forest spring, an autumn mountain, a ninja filled mansion, an underground sewer system, a desert oasis and more.

You will face off against the Origami King and his army of paper invaders, get ready to team up with some extraordinary companions and master magical powers on your quest to save the world.

We will have to wait and see what other details will be coming about the story in the coming weeks, but it sure does look amazing!

The Nintendo site reveals a brand new mechanic coming to the Origami King.

Nintendo has named the ability "1,000-Fold Arms" and it appears to be the main focal point of this Paper Mario title.

Players are going to be able to use these arms to interact and scale the world, as well as utilise them in combat.

Below is the excerpt that Nintendo provided us with regarding the "1,000-Fold Arms"

"Use the 1,000-Fold Arms ability to extend your arms to interact with the environment and solve puzzles. In battle, line up scattered enemies and plan your attack to maximize damage with the new, ring-based battle system that requires both puzzle-solving skills and a quick wit."

In a GameInformer interview, producer Kensuke Tanabe explained that "When continuing a game series, it’s much easier to carry over the basics from an existing game system rather than building new systems for each new instalment, But that’s not how you create new experiences or unexpected surprises. As a game designer, I want to deliver new experiences and surprises to our fans, so I always challenge myself to create something new. To be sure, I will sometimes use the same system in a subsequent game to further develop that system until I feel it has reached its full potential. But my goal is to continue to tackle new challenges as much as possible.”

With that in mind, expect plenty of surprises. In fact, that GameInformer preview also confirmed that Mario can use a "boot-shaped car" to move around, as well as a boat and an airship. 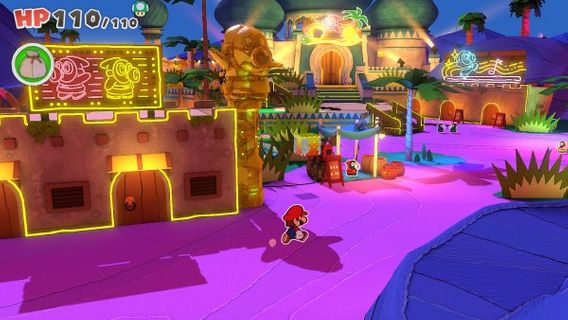 The combat system seems to have changed to a 360° platform and it looks fantastic!

The Battle Ring System is a 360° dynamic fighting arena that requires Mario to line up his opponents as effectively as possible.

Moving the rings will allow you to line up enemies in succession and chain attacks, as well as receive a power-up!

You'll need to strategically think about how you battle and what your next move will be.

It's not been confirmed how the mechanics work, but if they're similar to previous games, you will be able to block and perform Stylish Moves.

Unlike boss battles, Mario will create a path in order to get close to his enemy to deal damage. The player will need to move the rings with arrows on it and land on a designated attacking segment.

Throughout the game, Toad's will be placed that have been converted into unusual origami objects. By collecting them, they appear to help you out in battle.

“Mr. Naohiko Aoyama, who is a member of the staff at Intelligent Systems and the director of the previous entry in the series, Paper Mario: Color Splash, asked for a battle system in which the enemies surround Mario to attack from all sides,” producer Kensuke Tanabe said in a GameInformer interview. “That became our starting point when thinking about how the battles would work.”

There nothing quite like a good soundtrack whilst playing a Nintendo game.

It doesn't appear The Origami King will disappoint with its choice of music.

Nintendo has recently released the Red Streamer Batlle theme from the game. Here it is:

Battle Items will be available for use in combat such as:

There will also be boss battles (the menacing members of the legion of stationary) who guard the ends of the streamers in each region.

All Confirmed Partners In Paper Mario: The Origami King

In the game's trailer, we spotted the following partners:

Starting today, (like right now!) players are able to pre-order Paper Mario and pre-load it onto their Nintendo Switch consoles!

As for the price, this is going to be a full retail release so as listed on the Nintendo site, the game is going to run you the following prices:

The game can be pre-ordered at the following places in the UK: