FIFA 20 TOTS So Far Review: Top 7 La Liga Team Of The Season So Far Players You Need To Try Out

MattFUTTrading takes us through the Top 7 Players from the La Liga Team of the Season So Far that you need to try out in FUT 20!

Team of the Season So Far has hit a new stride this past week in FIFA 20 Ultimate Team, with the release of an awesome La Liga TOTSSF squad, available in packs now alongside the Turkish Super Lig TOTSSF.

Here are our Top 7 picks from the La Liga TOTSSF squad that you should be looking to get into your squad, with player analysis on each player, the best roles and playstyles, as well as the potential prices you should look at picking them up at.

It’s worth noting, we’ve decided to leave 99 Lionel Messi out of our selection, as he does have a better Team of the Year item and there are other top players in the team that are now receiving their best items in FUT 20. 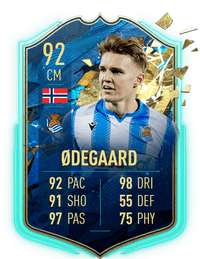 The first and cheapest player in our La Liga TOTSSF selection is the Norwegian youngster, Martin Ødegaard, with his impressive 92 rated blue card!

Being a 5* skiller with 98 Dribbling makes Ødegaard a very promising player going forward. He has an astonishing 97 Passing to his name, meaning his playmaking abilities are second to none.

99 Vision, 99 Crossing and 97 Short Passing, the youngster will be a top-quality attacking midfielder. This card shines on the ball, with 91 Agility, 91 Balance, 99 Ball Control and 99 Dribbling, meaning when you’re executing 5* skill moves, he’ll be responsive and crisp.

With regards to his best role, an attacking midfield role would be the best position to get the most out of Ødegaard’s playmaking and dribbling abilities. A central CAM in 4231/41212, linking up the attack is where the Real Sociedad man excels.

As we move into our top 6, we have the French playmaker, Nabil Fekir; this is an unreal card with 5 stats rated 90 or higher.

Fekir has 93 Pace, 96 Shooting, 93 Passing, 97 Dribbling and 91 Physical - the main man from Real Betis has everything you’ll need in an attacking player, with only 3 technical stats below 90 in-game.

Starting off with his insane 96 Shooting, you not only have 94 Positioning, 96 Finishing, 98 Shot Power, 96 Long Shots and 90 Volleys, but he also has some seriously useful traits (Chip Shot, Outside Foot Shot and Finesse Shot.)

To summarise, Fekir’s shooting is up there with the very best in FUT.

His Passing and Dribbling is of similar quality, meaning he can fulfil his playmaking duties just as well as his goal-scoring ones.

With such a strong skill set, Fekir can play a number of roles across the front line with ease, however, his best role has to be in his assigned role out of packs, as a CAM.

Playing him centrally, or on either side in a 4231 would be our recommendation, as he’ll get involved in the play both in the build-up, and getting on the end of attacking moves.

As we move into the top 5, we have the first of the 2 Real Madrid CBs, starting with the lower-rated of the pair.

If you thought his Player Moments SBC card was something special, that doesn’t compare to Ramos’ TOTSSF card, who has the potential to be one of the best CBs in FUT 20, and for a reasonable price!

With 91 Pace, 97 Defending and 94 Physical being the key stats, he’s one of the best out and out CBs money can buy. However, when you look at some of his other in-game stats, he does have the potential to play multiple positions.

Looking at his main attributes, his defending and physical, you can see that Ramos is an end game card. 98 Interceptions, 99 Heading, 94 Defensive Awareness, 97 Standing Tackling, 99 Sliding Tackling, with 99 Jumping, 94 Strength and 99 Aggression with 93 Acceleration makes Ramos one of the best CBs this year.

However, you can even play Ramos as a CDM if you wish. Thanks to 88 Agility nature and great passing stats, combo, Ramos can easily play a more advanced midfield role, if you’re someone with plenty of CBs in your club already.

The 2nd Real Madrid CB in our selection is the higher-rated, 95 pace Varane, who is also one of the best out and out CB cards you can get this year in FUT.

Simply put, 95 Pace, 97 Defending and 93 Physical. These stats are unrivalled when it comes to CBs and when you consider his 6’3” build and perfect work rates, it’s very difficult to find a downside to Varane’s card.

Key stats for him include 90 Acceleration, 98 Sprint Speed, 93 Interceptions, 94 Heading, 99 Defensive Awareness, 98 Standing Tackling, 97 Sliding Tackling, 91 Jumping and 99 Strength. These stats make him worth the 1m+ coins you’ll have to spend on him.

While he only has 78 Agility and 47 Balance, Varane does still have 99 Reactions that will counter this; so don’t read into those 2 key stats too much.

For the price, you’ll struggle to find a better CB this year on FIFA 20 Ultimate Team.

Kicking off the top 3, we have the first of our 3 attacking players, Karim Benzema.

Despite a couple of small issues with the card, primarily his lower than average Balance and Medium attacking work rate, the rest of Benzema’s stats help boost the card and make it one of his best cards in FUT history.

His Shooting is comprised of almost perfect stats and comes equipped with the Outside of the Foot Shot trait; making him one of the best finishers in FUT.

When you consider his other abilities, Benzema really is the complete forward for this year.

In terms of roles, look to play him right at the top end of the pitch, he’d be best served linking up and getting on the end of attacking moves.

With his work rates, avoid playing him anything other than ST, as he will get lost in attacking scenarios with only a medium attacking work rate.

Moving into our top 2, we have one of our favourite players this year in FUT, Antoine Griezmann.

Just touching on the only slight downside of the card, his 3* weak foot, don’t be put off, as Griezmann can easily compensate with his dribbling to get the ball onto his wand of a left foot.

When you do shift the ball onto his stronger foot in and around the box, you’ve got most of the shooting traits at your disposal - Chip Shot, Outside Foot Shot and the Finesse Shot traits.

His dribbling is another key feature of his TOTSSF item, with 98 Agility, 90 Balance, 99 Reactions, 98 Ball Control and 95 Dribbling, his 5’9” build and low centre of gravity makes his turns on the ball crisp and responsive.

When it comes to roles, Griezmann excels as an attacking midfielder, however with this version having a little more pace, you can play him up top as a striker.

Given his 3* weak foot, it’s important to have players around him to pass to, as you’re slightly limited with the way you can attack, but he’s a solid item that you need to get into your team!

The top player that we’d recommend picking up from the La Liga TOTSSF (that isn’t Messi) has to be the 97 Luis Suarez item, who is the definition of a complete forward in FUT 20.

When it comes to the roles and playstyle you should be looking to play Suarez in, it’s simple. As a striker. Wherever you choose to play him in the attack, as long as he’s getting in and around the box to shoot, you will have success with him.

Multiple reviews state that he’s one of the best finishers in the game and one of the most prolific attackers you can buy today, so if you’re looking to take your team to the next level, with guaranteed goals, get this 97 TOTSSF Suarez.