The Birdman will ride again - here's what we know about Tony Hawk's Pro Skater 1 and 2 Remaster!

Tony Hawk's Pro Skater 1 and 2 are being remastered for PlayStation 4, Xbox One, and PC, as announced via Geoff Keighley's Summer Game Fest Stream today.

The games will launch on September 4, 2020, and will be available on PC via the Epic Games Store.

Vicarious Visions, the team that bought us the Crash Bandicoot N.Sane Trilogy remaster (and that is currently rumoured to be working on a Diablo 2 remaster) are developing the package that will feature both games. 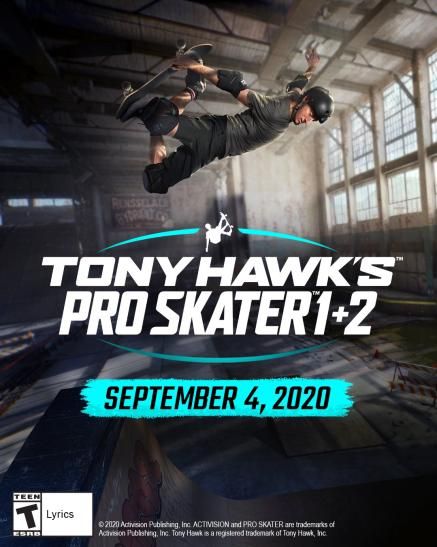 The Pro Skater 1 and 2 soundtracks have been revealed in a Spotify playlist:

Visuals have been updated, create-a-park mode is now more flexible, and online and local multiplayer is supported. You'll also be able to share your custom skate parks which should keep the content coming for months to come.

Perhaps most impressively is that the "vast majority" of the iconic soundtracks of both games are present, with some licensing issues meaning some tracks will slip through the cracks.

According to Vicarious Visions COO Simon Ebejer via an interview with The Verge, the team wanted both titles to blend with each other.

“We didn’t want the game to be ‘Okay, you play Tony Hawk’s Pro Skater 1, and then play THPS2 and start over from scratch, just like you would have if you bought the games back in the day. The meta that sits over the top of everything allows players to not feel like they’re losing progress by playing either one of the games.”

We can't wait to skate around with those iconic tracks and scrape our virtual knees all over the concrete.

Eight new characters have been announced for the remastered editions of both games.

The new characters are all famous names within the skateboarding scene.

The announcement of new characters for the game has only fueled the excitement further for the releases of these titles.

The game will be available on PlayStation 4, Xbox One and PC via the Epic Games Store.

Unfortunately, it doesn't seem to be possible for Nintendo Switch players to get involved in the action yet. However, past Activision and Vicarious Visions collaborations have ended up on the Switch; so don't rule it out completely.

Will Tony Hawk's Pro Skater 1 And 2 Remaster Have Cross-Play?

Jen Oneal, head of developer Vicarious Visions recently sat down in an interview with Gamespot to talk about the game.

When the topic of cross-play was brought up, all he had to say was "When the time comes we will say more".

This is incredible news and will likely give this game more life after launch and be a massive draw for new and older players.

If you pre-order the game you can get access to the iconic Warehouse level before the game releases. Suggesting that players will be able to access the game early.

Currently, no information has been revealed on what the different editions include but there is a standard edition and a collector's edition (which is reportedly only available at GAME in the UK).

It looks like Microtransactions may not be included at launch of the game and that the focus for rewards is purely on gameplay.

In an interview with Jen Oneal, head of developer Vicarious Visions said: "Everything that you see at launch is going to be unlocked with gameplay. We’re not planning on having monetization at launch.”

That doesn't mean that future microtransactions won't be added at a later date. Being able to customise characters and skateboards would be a beautiful thing and the possibility of NEW skateparks would be another way to spark more longevity into the game.

Here are the characters that were available in the original version of Pro Skater 2:

Here are all of the levels available in Tony Hawk's Pro Skater 1 and 2: