FIFA 20 Super Lig Liga TOTS So Far Objectives: How To Unlock Radamel Falcao Team Of The Season Card FAST And The Best Cards To Use

Looking to unlock Falcao's TOTS So Far card without the stress? We've got the guide just for you!

The Turkish Süper Lig Team of the Season So Far has been released into FIFA 20 Ultimate Team, with an awesome squad of 11 released into packs, as well as a Falcao Season Objective available to complete.

Here is all the information for Radamel Falcao’s 90 rated TOTSSF Season Objective, as well as the Top 3 Players from the Super Lig TOTSSF that you need to try out in FUT 20.

With 11 new players released into FUT 20 from the Turkish Süper Lig TOTSSF, here are the top 3 players that you should try out! 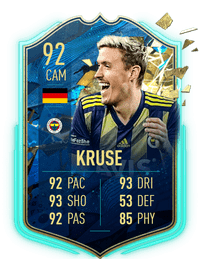 After a solid season for Fenerbahce, the German playmaker has received a very well rounded attacking midfielder item and is someone you should look at trying out from the Turkish League TOTSSF.

Kruse has a 4* Weak Foot and 4* Skill Moves, with stats upwards of 92 for his Pace, Shooting, Passing and Dribbling, Kruse is perfectly suited for a central attacking midfield role in any side.

For an attacking player, Kruse is everything you could want and is reasonably priced.

While the strong links in the Turkish League aren’t the best, being German, you can link him into a solid Bundesliga setup, by surrounding him with fellow Germans, such as Timo Werner and Marco Reus.

The Brazilian winger looks like a solid pickup from the Super Lig TOTSSF squad, with pace in abundance, crazy dribbling stats and great shooting statistics.

On the face of his card, his stats are awesome - 97 Pace, 92 Dribbling and 91 Shooting making up the main draw to this item.

In-game, his 99 Agility and 99 Balance are the 2 key stats to look out for and will allow him to turn very quickly in-game. Cutting in from the right-hand side onto his left foot, allows you to exploit his 97 Shot Power and 93 Long Shots.

Again, being in the Turkish League, strong links are somewhat limited. However, from the TOTSSF squad, fellow Trabzonspor inclusions Alexander Sorloth and Jose Sosa are good options, with an RB link to Galatasaray’s Mariano also being a powerful strong link.

With Norwegians being very popular in FUT this year, Sørloth is another top player to add to the list as a potential strike partner to Erling Haland.

Although he only possesses 69 Agility and 74 Balance, Sorloth’s 6’4”, 91 Pace, 99 Strength and 85 Aggression makes him a very difficult striker to defend.

Once in the box, his 94 Positioning, 93 Finishing and outstanding 98 Shot Power means most shots hit the back of the net.

In terms of links, we’d definitely suggest trying to link in some Norwegians if you can! The newly released Martin Odegaard TOTSSF card is a great place to start, with Erling Haland obviously available too!

Celebrating his inclusion in the Turkish Super Lig TOTSSF, Radamel Falcao is available in Season Objectives until 6pm on Monday, May 19th.

With multiple objectives to complete in Rivals, in order to complete this in the quickest time possible, the best idea would be to rock your best team if possible, bringing some players that fit more specific requirements off the bench, such as Super Lig/Colombian Players.