Halo 2 Anniversary: Multiplayer Tips And Tricks Guide To Improving Your Gameplay For Beginners

Arguably the best Halo game of all time is making a return soon, you better get ready for some multiplayer action!

Halo 2 Anniversary is finally coming to PC as part of the Master Chief Collection!

Although we're still craving some footage of the next instalment, which will be Halo Infinite for the Xbox Series X, this is a nice present to keep players ticking over until the end of the year.

It may be some time since you last played Halo 2, so you might be a bit rusty when it comes to multiplayer.

Let's take a closer look at some of the tips and tricks we can provide you!

Every Spartan will have a shield and their base health. To kill a player you will need to lower their regenerative shields long enough to attack their health.

Aiming for the head will do more damage in most scenarios here's what it requires to kill someone in Halo:

It's also important to remember that when a player's shields are down, they will go down in one melee attack. A double melee will kill off an opponent and a melee to the back will kill in 1 hit.

Along with perfecting your usage with weapons, another important aspect of how you are going to eliminate enemies is using Grenades.

These pesky balls of death have always been strong throughout the Halo series and this is going to be the case when May 12 rolls around.

You can carry for grenade - two frag grenades and two sticky grenades. Frags are great for bouncing off of walls and floors so they skid to the feet of your opponent.

Knowing certain lineups and how far you can throw a grenade with it still hitting the ground is key.

These can result in some vital eliminations for you and your team and you are going to want to perfect your grenade placement!

If you're in a gunfight, try to open up by throwing a grenade to damage your opponent. It will also likely force them to reposition and take their aim off of you.

Lastly, if you know you're going to die, spam as many grenades as possible. You'll sometimes get a kill from the grave or weaken them enough for your teammates to clear up after you're gone.

Although this may sound like a regular tip, knowing the maps is one of the most vital components of any Halo game.

With so many nooks and crannies on each map, it can be important to understand where your opponents can flank you from or have an angle on you.

You also need to understand where certain power weapons sit and which ones are most valuable - these will be major hot spots and places to control throughout the match.

Jump into a private match and get an idea of where these weapons are and how best to approach them.

Usually, it's better to get a few kills before picking up a power weapon. It's also important to remember that weapons are on timers and will respawn after a certain time. 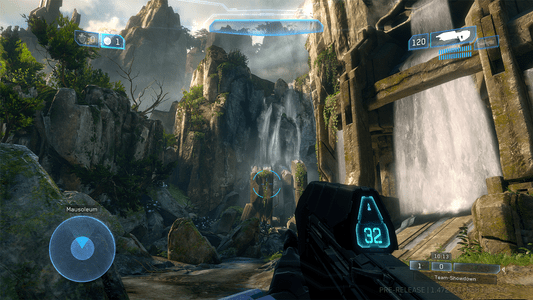 Halo is not one of those multiplayer first-person shooters where you can go in, guns blazing and expect to come out on top.

Unless you are a professional player or just happen to have some amazing aim, you are going to find yourself being mowed down if you do not play smart.

Knowing how to outsmart your opponent, whether it is getting better positioning on them or knowing when to boost in the air is vital for Halo 2.

We recommend sticking with your team whenever possible.

Strafing is an incredibly important manoeuvre to master as it will make you a tricker target to hit - simply move side to side whilst shooting. It's more effective than jumping because you're left stranded in mid-air with no way to change direction; this makes it easier for the more experienced player to pick you off.

You move faster when you're on the floor, so try to stay grounded when possible.

The mini-map is often an overlooked feature in Halo and its purpose has changed over the years.

In the early Halo games, the mini-map/radar functions almost like a sonar radar. When your opponent runs or jumps, they will appear as a red dot on your radar; you will also appear on the enemy radar when you do this.

To avoid being seen on it and having enemies swarm on your position, you can crouch walk to avoid showing on the radar; equally, you will be hidden when standing still.

If an opponent is on a platform below or above you, that red dot will have a small arrow either pointing up or down.

This is a good way to get some knowledge on little tips and tricks you might not be aware of, this can also be good to study how they play so you mimic some of their plays.

Keep your eye out for the Halo 2 category or the Master Chief Collection category over on Twitch, YouTube or Mixer next week.

Halo 3 ODST Audio Logs: Map Locations Guide And How To Find All 30 Collectibles?