FIFA 20 Saudi League TOTS So Far: How To Unlock Romarinho Objective And The Best Players To Use

MattFUTTrading takes us through the Top 3 players to try out in the new Saudi League TOTSSF, as well as the new 89 Romarinho Season Objective.

The Saudi Professional League has been added to FIFA 20 Ultimate Team as the latest Team of the Season So Far team, it’s time to go through the top players you should look at picking up for your team, as well as the latest objective player in FUT!

With 11 new players released into FUT 20 from the Saudi Professional League TOTSSF, here are the top 3 players that you should try out! 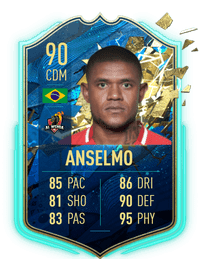 One of the top players in the league, and a very well rounded defensive midfielder, Anselmo looks to be a solid addition to a team.

With perfect workrates for a CDM, as well as 95 short passing, 93 long passing, 91 defensive awareness, 96 standing tackling and 96 strength, along with solid 87 acceleration, 91 agility and 93 balance, Anselmo looks to be a solid meta CDM if you can fit him into your team!

With good Brazilian links in the Saudi League to the likes of 89 Romarinho (available in objectives, read below to see how to complete him), 88 Petros, 87 Carlos Eduardo and 87 Maicon, he’s relatively easy to fit into teams.

With an unreal card, Hamdallah is easily the best out and out striker in the Saudi League TOTS squad, with that 95 shooting, 92 pace and 89 physical combination.

Starting off with his shooting, he has 99 Positioning and 99 Finishing, along with 93 Shot Power and 91 Volleys. When coupled with his 96 Composure, 96 Agility, 93 Reactions and 94 Ball Control, there’s no reason why Hamdallah can’t be utilised as one of the better strikers in FUT in and around the box. A major addition to this card is his physical presence, with 94 Jumping and 91 Strength making him even harder to push off the ball when turning quickly with his high dribbling stats.

Easily the best player in the Saudi League TOTSSF squad, Sebastian Giovinco looks set to be one of the best dribblers in FUT this year, with 98 Dribbling, and his 5’4” build with a very low centre of gravity being key factors.

Expanding upon his dribbling, Giovinco has 99 Agility and 99 Balance, which will already make him one of the quickest turning players in the game, as well as 96 Ball Control and 96 Dribbling. His shooting isn’t half bad either, with 97 Positioning and 91 Finishing, along with 94 Shot Power and 95 Long Shots.

While the meta strong links are slightly limited in the Saudi League, with 89 Gomis and 87 Carlos Eduardo being the only key options, for those with Italian icons in their team, consider getting Giovinco into your setup.

Celebrating his inclusion in the Saudi League TOTSSF, Romarinho is available in Season Objectives until 6pm on Monday, March 11th.