FIFA 20 TOTS So Far Review: Top 7 Premier League Team Of The Season So Far Players You Need To Try Out

MattFUTTrading takes us through who you should be looking to pick up from the Premier League Team of the Season So Far!

With Team of the Season So Far well underway in FIFA 20 Ultimate Team, with the Premier League TOTSSF currently available in packs.

Here are our Top 7 players that you need to try out from the Premier League TOTSSF squad, with player analysis on each player, the best roles and playstyles, as well as the potential prices you should look at picking them up at.

As our first player, you have to get your hands on from the Premier League TOTSSF, we have the Liverpool engine room, Jordan Henderson, with an incredible 94 rated card.

Having used Henderson in the Weekend League just gone, achieving a solid Elite 2 finish, I can confirm that for his price, Henderson is one of the best value central midfielders in the game currently.

With stats and an in-game playing style comparable to Gullit (without skills and weak foot), Henderson is the perfect central midfielder for FIFA 20, combining strength and dominance in midfield with tonnes of technical ability.

With only 1 stat below 80, that being his 77 Heading Accuracy, there’s very little this card can’t do, with everything from shooting to dribbling to defending, and especially passing being brilliant features.

In terms of the perfect role, I’d recommend either a box to box midfielder role in a 41212 or 442 or as a dual CDM in a 4231. It’d be advised to pair him with someone a little shorter and agile perhaps to have a good balance in midfield, but there’s no doubt that Henderson is up there with the best.

Our first striker to try out in the selection goes to Fantastic Mr Fox Jamie Vardy, with an unreal 95 rated item, with an additional star to his weak foot also, taking him up to 4*.

The main selling point when it comes to Vardy is his pace, physical and shooting ability, he’s an out and out goal scorer to lead the line. With 99 Finishing, 99 Positioning and 99 Shot Power, you can be sure when he gets into the box, he’ll be slotting away most chances presented to him.

Furthermore, with 90 Agility and 90 Balance, he’s able to turn relatively quickly in responsive gameplay, and with the additional point on his weak foot, he has the ability to shoot pretty well on either side.

With regards to roles, Vardy can play anywhere across the front line, be it as an ST, or even as a wider RAM/LAM if you needed him to, thanks to his pace and decent passing stats.

Given his lack of skill, try to pair him with some more skilful players perhaps if you want to add an extra dimension to your attacks.

Next up, he’s Brazilian, he only cost £50 million, and you can figure out the rest. Yes, it’s Richarlison, with a super well rounded 93 ST item, of course with the 4* Skill Move and 5* Weak Foot combination, making him a very appealing striker this year.

One of the major reasons Richarlison is someone you should seriously consider trying out is his 5* Weak Foot. In FUT this year, 5* Weak Foot attackers are so important going forward, as the ability to go onto either foot when in and around the box allows for more unpredictable attacking scenarios, leading to more goals.

With Richarlison, you’ll be able to shoot on either side and bag far more goals against people that tend to pack the defence.

As a role, we’d recommend keeping Richarlison central if possible, to fully take advantage of the 5* Weak Foot in attacking situations.

While he does have the pace and power to play a wide role, he’s far better utilised when presented with tight situations in which it’s important to be able to shift the ball onto either side. A top card that can add that special something up top!

Now moving onto the more expensive players in the team above 1.5m coins, we’ve got Spurs’ only TOTSSF inclusion, with Heung-Min Son and his 95 rated LM item.

While being positioned on the left may put some people off, a simple position change in-game to ST/CAM/RAM/LAM via custom tactics is possible and allows you to play him wherever you’d like.

As I’m sure many people that have played against Son this year will confirm, his cards in FUT are always a pain to defend against, with his pace and build in-game allowing him to shrug off defenders and smaller full-backs, coupled with his 5* Weak Foot ability to play on either side.

Being slightly taller works wonders for Son on the attack, as he still has 96 Dribbling, making him feel agile on the ball despite his height, allowing him to shrug off and work his way around defenders, getting high-quality shots in on goal.

To really get the most out of this card though, a central role would be advised, to allow him to utilise his 5* Weak Foot and 95 shooting in and around the box.

The top 3 players in our selection, somewhat unsurprisingly, are all Manchester City players, starting off with the Algerian trickster, Riyad Mahrez.

Being one of the more affordable TOTSSF items, currently, under 1 million coins on all consoles, Mahrez is heavily demanded, being regarded as one of the best RWs in the league, despite strong competition from the likes of TOTSSF Salah and FUT Birthday Saint-Maximin.

What makes Mahrez so popular is a combination of factors, being his 95 Pace, 94 Shooting with Finesse Shot Trait, 97 Dribbling which includes 99 Agility and 98 Ball Control, as well as his 5* Skill Moves. Put simply, he’s one of, if not the best inside forward on the right-hand side in the Premier League.

Now, while Mahrez may play a pivotal role on the right for Man City, does this mean you should play him in a similar role, cutting inside from the right on his left foot? In FUT, with how crowded defences can get, it’s advised to not cut inside as much, as you’ll be running into traffic more often than not. For that reason, Mahrez is actually better served in a more central role.

A number of professional FUT players I watched using this card actually played him in a central CAM role and found that his 99 Agility, 98 Ball Control and 5* Skill Moves were perfect for creating space and chances in and around the box. For the FIFA 20 meta, Mahrez fits the attacking midfield role perfectly.

Without a doubt, the best striker in the EPL TOTSSF has to be Sergio Aguero and his 96 rated ST card, with an incredible set of stats.

Just running through his in-games quickly, you can understand why this card is so deadly. 99 Positioning, 99 Finishing, 95 Shot Power, 93 Agility, 99 Balance, 99 Reactions, 99 Ball Control, 98 Dribbling and 99 Composure just to name a few important statistics.

To put it simply, Aguero is up there with the very best strikers in the entire FUT database.

Having watched people use Aguero this weekend at the highest level of competitive FUT, there’s no substitute for what he contributes to a team. Being only 5’8”, his low centre of gravity makes him turn even quicker than normal, meaning when left stick dribbling is used effectively, he can create chances out of nothing.

When he does get into a goal-scoring position, his 97 Shooting doesn’t disappoint either. 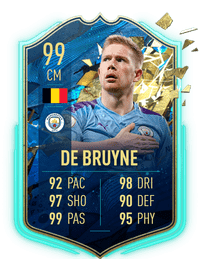 Our final player that you have to try out (if you can afford him), has to be the 99 Kevin De Bruyne card. While he may have already had an incredible 98 TOTY item, we can’t ignore his 99 rated CM item, with all stats above 90!

To compare him to Gullit would be an understatement. While many cards don’t come close to the Dutch icon this year in FUT, this KDB item is the only midfielder that we feel can actually exceed him in terms of impact on the pitch, he can do it all.

If you can get this card in any way, even if you have to sell half your team to finance it, get, him, in!