Another day, another new bug found on Warzone.

The April 28th Patch for Call of Duty: Modern Warfare and Warzone seems to have broken just as much as it fixed.

As if it wasn't bad enough that, since the patch on the 28th, players can no longer play a game without the game chat completely shutting down, but now a bug has surfaced, and it's giving the victory to players in the Gulag.

Here's how it works - the player gets stuck in the Gulag for longer than usual, due to a build-up of prisoners waiting to duke it out.

The game acknowledges the players in the Gulag as alive, so regardless of a team dominating the match, the game will continue, causing the winning team to be killed by the circle, leaving the player that comes out on top in the Gulag victorious.

In one of many crazy examples, Redditor ‘Sitech7’ shows the last team alive in a match, who die to the circle because they have nobody to fight.

The HUD shows there are teams still alive, but where are they? That's right... the Gulag.

You can watch the full video here. 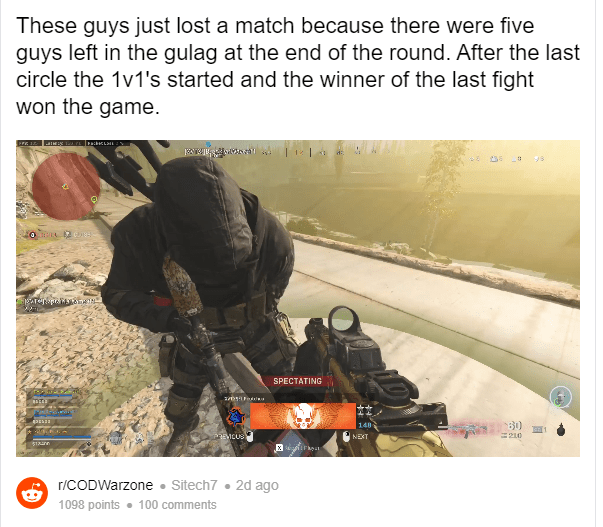