MattFUTTrading takes us through the latest Premier League TOTSSF Objectives, as well as some handy tips to help you get cards even quicker!

The Premier League Team of the Season So Far has been released in FIFA 20 Ultimate Team. As well as a full team, there are 2 players available in the objectives, these being 91 Raul Jimenez and 89 TOTSSF Moments Ayoze Perez.

With 8 objectives to complete in total across both players, here is the full list of objectives, players you can use to knock off multiple objectives in the same game, as well as some tips and tricks as to how you can get objectives done in double time! 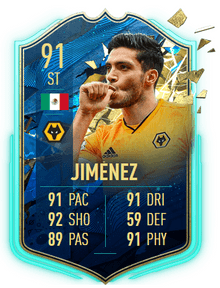 Celebrating his inclusion in the Premier League TOTSSF, Raul Jimenez is available in Season Objectives until 6pm on Friday March 8th.

With multiple objectives to complete in Rivals, in order to complete this in the quickest time possible, the best idea would be to rock your best team and utilise some Premier League players with 4* Weak Foot.

Then, once in-game, substituting a La Liga and Liga NOS forward, as well as a version of Raul Jimenez, would be best to hit all 4 objectives at the same time. 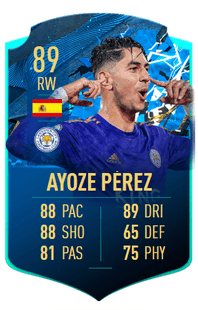 Celebrating his hat-trick in a record Premier League away win, TOTSSF Moments Ayoze Perez is available in Season Objectives until 6pm on Friday, March 8th.

As you’re able to complete all of the above objectives in Squad Battles, with only a maximum of World Class difficulty, it’d be best to focus on getting those games completed in your grind for Ayoze Perez.

With only 7 games required in total, this is an easy one to get done in a couple of hours if you use some Spanish Premier League forwards, such as Pedro, Deulofeu or Adama. 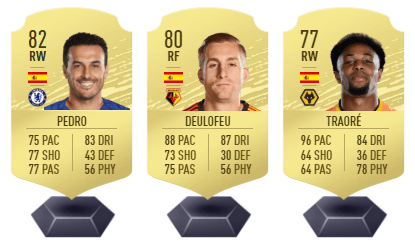 As Division Rivals is a majorly competitive mode, getting objectives done that require goals/assists or even wins in Division Rivals can be tricky, so here are some tips and tricks that you can use to hopefully make the grind a little easier.

When playing Division Rivals, it’s always best to have as many of your top meta players as possible, to compete against the other top teams you’ll be facing.

The best way to go if you can is to start with your meta team and substitute on players for objectives, assuming, of course, they don’t fit into your team from the get-go.

If they do fit into your team, then start them, and then once you’ve completed your specific objective, i.e. Score Finesse goals with a Premier League forward, you can then sub them out for one of your main starters.

While some are against dropping down divisions, it’s something many players do in FUT to come up against more players that are completing objectives.

You’ll be less likely to face the top tier teams, meaning the likelihood for more wins in a shorter time frame.

You’ll be surprised how many players in FUT will help you out along the way while completing objectives. Just asking politely if you can score a goal with a certain player (assuming you don’t need the win), and then playing out the rest of the game will go a long way in helping you complete objectives.

Being an offline mode, Squad Battles is far easier to complete objectives in. Here are some key fundamentals that you should take advantage of when getting cards completed.

Fake shots against the AI are super overpowered this year, with AI defenders lunging in to create space for an attack.

he best trick is to use them in and around the box, cutting to the byline where possible, using a fake shot to commit the defender, before cutting the ball into the centre of the box for an easy tap in. Use this against the AI and you’ll be winning all your games with ease.

While this may not save you time in-game, this glitch can make the Squad Battles grind far more relaxing. To perform, simply get a 1-0 lead against the AI, then dribble into the box with the ball, and perform a fake shot stop.

To do this, you’ll want to press L1+O on PS4, or LT+B on XBOX, making sure to let go of the left directional stick when performing.

If performed correctly, your player will come to a dead stop on the ball, and the opposition defenders will not press you for the rest of the game, allowing you to sit there and let the game play out, while you go and do something else.