A new gang has been revealed in Cyberpubnk 2077 called the Tyger Claws gang.

It's been a month absolutely filled with news surrounding Cyberpunk 2077.

First, we saw a bunch of limited-edition hardware reveal around the time of the game's initial release date, which was soon followed by a leak of the game's official rating and mature themes.

And now, following more news that there could be new gameplay revealed at the IGN Summer of Gaming event in June, the developers have just released some details about two more gangs in the game.

Continue below for all the details!

Earlier in the week, CD Projekt RED shared the logo for a Cyberpunk 2077 on Twitter for a gang called the Valentinos - a Latino-dominant gang that treats values such as "honor, justice, and brotherhood" with deadly seriousness.

And now, they have just shared a logo for the Tyger Claws gang too. 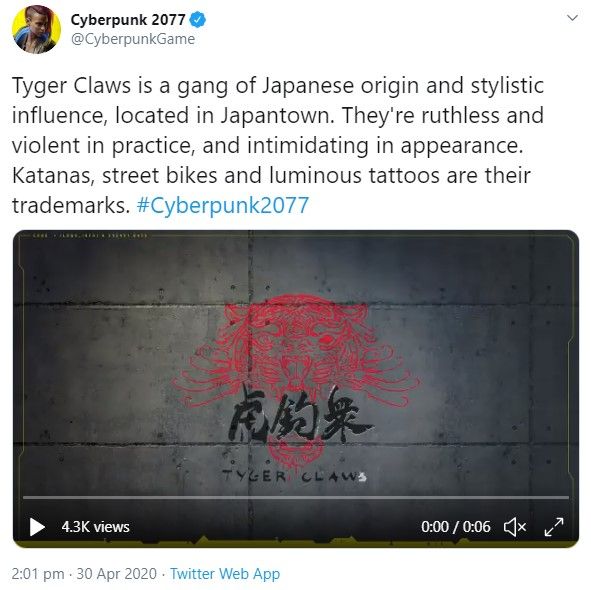 "Tyger Claws is a gang of Japanese origin and stylistic influence, located in Japantown. They're ruthless and violent in practice, and intimidating in appearance. Katanas, street bikes and luminous tattoos are their trademarks."

Not much is known about the combat gang, other than the fact that they claim turf in Japantown and the residential community surrounding it.

They prefer to rely on martial arts, traditional Japanese weapons, and enhanced reflexes, rather than cyberware.

Maybe we will be seeing more of them at the IGN Summer of Gaming event in June.

Cyberpunk 2077: How Many Endings Are There?