MattFUTTrading takes us through the potential candidates for the Saudi League Team of the Season So Far.

Team of the Season So Far is nearing the 2nd week in FIFA 20 Ultimate Team, and it’s predicted that we’ll be getting both the Premier League and Saudi League TOTSSF squads.

Here is our selection for who we think will make it into the Saudi Professional League Team of the Season So Far.

Saudi League Team of the Season So Far Prediction

Here are our picks for the FIFA 20 Saudi League Team of the Season So Far squad. 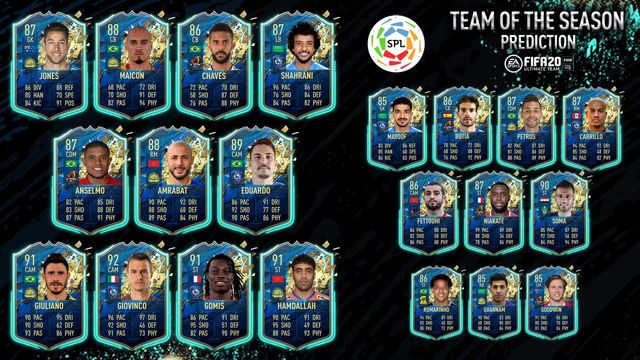 The starting GK in our Saudi League TOTSSF prediction is the Aussie, Brad Jones, keeping the most clean sheets in the league this season, with 10.

A key component in the strongest defence in the league, with only 16 goals conceded, Maicon deserves a spot in the TOTSSF.

With the most interceptions in the league and a strong season on the whole with Al Wehda, Renato Chaves should make it into the side.

A staple in the Saudi League TOTSSF teams for the past few years, I’d expect Al Shahrani to make the cut, having had an impressive season with table-topping Al Hilal.

Rated as the top player this season in the league by SofaScore, Anselmo has not only had an impressive season defensively but also holds 8 goals so far this year.

The Moroccan winger has had a successful season on the assist front, grabbing 8 for Al Nassr, as well as 3 goals, and the most successful dribbles in the league with 81.

The first of 3 top CAMs, Carlos Eduardo is deserving of a spot in the Saudi League TOTSSF for his 11 goals this season from a deeper midfield role.

8 goals and 4 assists for Giuliano should be enough for a high rated TOTSSF card, with Al Nassr 2nd in the league currently.

Voted currently as one of the top 3 players this season by SofaScore, Giovinco has 6 goals and 7 assists, and a solid overall average rating.

The 2nd top goal scorer in the league, Gomis has 14 goals and 4 assists to his name in the SPL this season and should take up one of the two starter ST spots.

The Moroccan target man has been on fire yet again in the Saudi League, grabbing 18 goals this season, and should be the favourite for a TOTSSF item.

The 2nd GK spot goes to the Al Hilal shot-stopper, who’s made an impressive 48 saves and kept 7 clean sheets so far this season.

With the most clearances in the league, at 104, and also boasts a couple of goal contributions, as well as 8 clean sheets, Botia should sneak into the team.

Yet another Al Nassr inclusion, Petros has been a rock in the holding midfield position for his team and has also contributed a handful of goals for his team.

Al Hilal’s pacey winger deserves a spot in the side after 7 goal contributions and a very high number of successful dribbles this season.

The Al Wehda playmaker is 2nd in the assist tables this season, with 9 to his name, just short of Giovinco for the top spot.

Despite already having a very good League SBC item, expect Niakate to get an even bigger boost, thanks to his impressive goal scoring form in the league, with 12 under his belt so far.

Another top ST to look out for, Al-Soma has 13 goals to his name this season, which should be enough to see him included.

An outside selection, however with 11 goals and 3 assists this season, the Brazilian has a good chance of making the cut.

Full backs were tricky to select in the league this season, however, Ghannam should be included with 5 assists from full-back for his side.

4 goals and 7 assists for Craig Goodwin, as well as a very strong average rating for the season by multiple statistics outlets, suggest he’ll get into the Saudi League TOTSSF.