The Bruen MK9 is the newest weapon to be added to Modern Warfare. Find out the best loadouts for the new weapon in this guide!

As part of the 1.20 patch that went live on April 29th, a new weapon has been added to the ever-expanding multiplayer weapon arsenal of Modern Warfare and Warzone.

Unlocked by completing a challenge or through the in-game store, The Bruen MK9, an air-cooled light machine gun, offers a solid rate of fire competing with the other weapons in its category and provides excellent stability when engaging with a target at mid to long-ranges, making it much easier to control than some of its counterparts.

In this guide, we will show you three different loadouts to suit all styles of play alongside some handy tips and tricks to give you the advantage over your opponents during the rest of Season 3 of Modern Warfare.

This class is designed to lay down a relentless wave of gunfire onto an enemy location, perfect for players that prefer to get involved in the action from afar 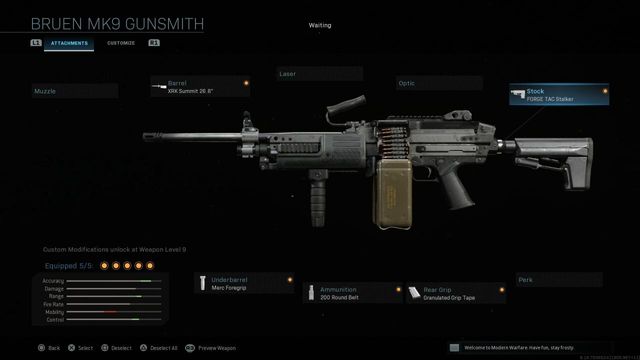 Given the sheer number of bullets in the magazine, this attachment combination gives the Bruen some additional stability when opening fire on the opposition.

Selecting this perk combination is a great way to deal even more damage. EOD will protect you from explosives while Restock enables you to have your grenades resupplied over time. Shrapnel further bolsters your utility, giving you an extra piece of lethal equipment when you spawn in.

There is nothing more satisfying than scoring a kill from a well-placed, perfectly cooked grenade. Use the frag to clear out a densely populated area of the map and use the stun to slow down enemies before you unleash the 200 rounds onto their position.

Given the lack of mobility of this loadout, it is likely that you will come under fire from a variety of lethal equipment. Place a trophy system in front of your location to prevent any enemy utility from disrupting your gameplay.

This combination of killstreaks can be earned extremely quickly when in the right areas of the map at the right time. Stay back and pick off enemies thanks to the range advantage to guarantee a dangerously high streak.

This loadout excels in mid-range engagements, easily dispatching of Assault Riflers and some optimistic sub-machine gunners. 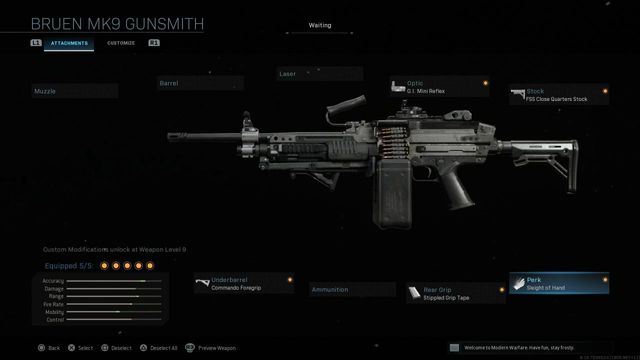 With these attachments equipped, the Bruen heavily resembles the M249 SAW from Call of Duty 4 and just like its predecessor, the Bruen packs a heavy punch armed with attachments to provide some recoil control and a quicker aim down sight speed.

Double time adds some much-needed mobility while overkill allows you to select a second primary weapon. We selected an MP7 for close-quarters scenarios. Lastly, tune up, increases the recharge rate of Field Upgrades, allowing you to access it much quicker than usual.

This combination of equipment may seem strange but placing the proxy mine onto an objective and covering its location with a smoke grenade is a great way of catching out any aggressive enemies looking to grab a quick kill by charging through the cover of the smoke.

With Double Time equipped to navigate the map faster, Dead Silence is a logical choice. Use it to flank behind the enemy without them noticing for the opportunity to score several kills in quick succession.

Armed with the ability to play more aggressive, it is more than likely that you will have a few more deaths to your name so this killstreak combination doesn’t take much to earn but still deals a significant impact on the map.

The third and final loadout packs a hefty punch despite looking like extremely unassuming. 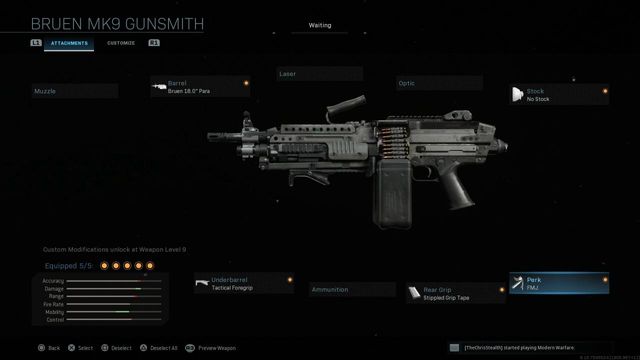 This attachment combination is a great mix of recoil control, additional mobility along with the addition of FMJ to make sure no enemy is safe even if they are hidden behind cover.

Quick Fix is a heavily underused perk. Enabling an increase in health regeneration speed, it is one of the best perks to have when in amongst the action. Hardline reduces the cost of killstreaks by one, making it easier to earn some of the higher streaks when playing aggressively and Battle Hardened increases your resistance to flash and stun grenades, allowing you to keep focused on the action taking place in front of you.

Using a Semtex instead of a frag grenade is sometimes the way to go thanks to its ability to be stuck to surfaces. The decoy grenade is the real party piece, enabling you to bait enemies easily without risking your life.

Fancy adding an extra dose of lethality on this already powerful weapon? Of course, you do! Select Stopping Power Rounds as your field upgrade for a drastic increase in damage.

This combination of streaks deals huge amounts of damage especially on the smaller maps on Modern Warfare. White Phosphorus may hinder your vision slightly due to the white smoke but with gradual damage being dealt to every single member of the enemy team making them extremely easy to eliminate, it is certainly worth the trouble of moving through the mist.