FIFA 20 TOTS So Far Review: Top 7 Community Team Of The Season So Far Players You Need To Try Out

TOTS So Far's Community squad brought some fantastic players, but who are the best players?

With the first full week of Team of the Season So Far well underway in FIFA 20 Ultimate Team, it’s time to start looking at some players that you need to try out in FUT 20.

The Community squad was released last Friday, so here are the Top 7 players that you need to try out, with player analysis on each player, the best roles and playstyles, as well as the potential prices you should look at picking them up at. 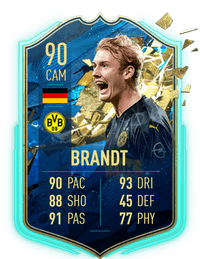 Kicking off our Community TOTSSF Top 7 we have Dortmund’s Julian Brandt, who adds to the ever-growing pool of top tier talent available in the Bundesliga this year in FUT 20.

With his 4* Skills and 4* Weak Foot combination, along with 88 Agility, 90 Reactions, 94 Ball Control and 94 Dribbling, Brandt oozes technical ability in the final third.

96 Short Passing and 94 Vision are keys in making him one of the top playmakers in the league, and when coupled with his shooting stats, which all are 88+ other than penalties, you have one of the best all-round attacking mids in the league.

For links, you are utterly spoiled for choice, with the likes of 92 Haland, 91 Reus, 90 Werner and 89 Sancho in the attack. In the midfield, the likes of 91 Goretzka, 90 Havertz and 88 Muller offer everything you’ll need, with 91 Boateng being the best defensive option should you need it. 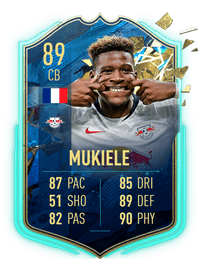 Sticking with the Bundesliga, we have one of the top CB options in the league, with RB Leipzig’s Nordi Mukiele.

The first thing that grabs the attention are the pace stats, with 84 Acceleration and 88 Sprint Speed in-game, which, considering he’s 6’1”, with 99 Jumping and 93 Strength, make him an absolute defensive powerhouse.

89 Defending on his card makes him not only a physical presence but a strong unit defensively 1v1 as well, with 92 Standing and 94 Sliding Tackling.

The best part about Mukiele’s game though has to be his dribbling and passing stats, that makes him a real ball-playing CB that’s comfortable in possession.

With perfect links to both 87 Konate and 86 Upamecano, plus a strong link to 88 Hernandez, and a TOTSSF GK option with 89 Gulacsi, Mukiele is a top card to consider fitting into your team, and will no doubt be a top performer against quick, meta attackers in FUT Champs.

Having everything a CB needs, Mukiele will be outstanding anywhere in defence, be it as a CB in a dual CB formation, a wide CB in a 352, or even the central, ball-playing defender in another 3 at the back-formation.

With the first of 3 Premier League picks in our top 7 Community TOTSSF players, we have the FUT fan favourite, Wilfred Zaha, who brings bags of pace and also 5* Skill Moves to the table.

Having been a popular card for some time now, we all know what draws people to the Ivory Coast trickster, and that will be his 97 Pace, 97 Dribbling and 5 Star Skill Moves.

He’s always been one of the top skillers in FUT, and this card does him justice. Talking about his main selling point, dribbling, he has 97 Agility, 97 Ball Control, and 99 Dribbling, which makes him statistically one of the strongest in this area in FUT.

With the added bonus of 84 Strength, he becomes even harder to knock off the ball, and with 90 Finishing and 93 Shot Power, once he gets in and around the box with his skills, he can let it fly with his right foot.

Despite being set as a CF when pulled in packs, it’s advised to play Zaha a little wider in-game, potentially as a RAM/LAM in a 4231, or RW/LW in a 433 type formation.

This will allow you to fully exploit defences with his pace, and get 1v1 with opposition full-backs, to fully utilise his dribbling and skill set. 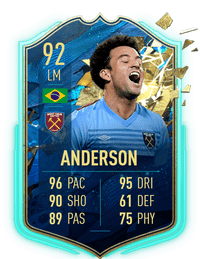 While there are a number of LMs available in the Premier League, not many come close to Felipe Anderson, with 96 Pace, 95 Dribbling and 90 Shooting being some of the best stats in the entire league, with only TOTY 97 Mane being a better overall option.

His pace speaks for itself, and with his 95 Dribbling including 96 Agility, 93 Balance, 95 Ball Control and 97 Dribbling in-game, he’s one of the best dribblers in the league currently. Couple that with his 4* Skills and relatively short 5’9” build in game, Anderson turns on a dime, and is so difficult to pin down. One of the biggest positives though, is that he has a lethal shot on him, something that a lot of wingers tend to lack. 86 Finishing is a good starting point, but is boosted with 99 Shot Power and 98 Long Shots, meaning you can break into the opposition half with pace, and finish chances with this card.

With plenty of Brazilians in the Premier League to link Anderson to, his best position by far would be as a left winger or left attacking midfielder in the likes of 433 or 4231, as he’ll have space to roam the opposition half, break with pace, and will get plenty of shooting opportunities. 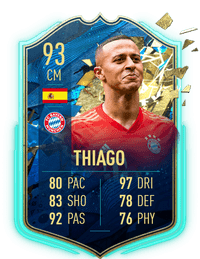 Moving into our top 3, we have Thiago from Bayern, who may not be everyone’s top pick at first glance, but is actually an unreal player upon further inspection.

Let’s start off with his 2 best features, his passing and dribbling. Passing wise, this is one of the best cards in FUT, with 93 Vision, 97 Short Passing, and 94 Long Passing.

His playmaking ability cannot be ignored. 97 Dribbling is an unreal stat, with every single in-game stat above 92 in this category, making him one of the most responsive, agile players in FUT 20.

Now, many may look at Thiago with only 83 shooting and 78 defending and be put off, but don’t be. On the defensive side of things, he has an incredible 93 Interceptions stat that goes unnoticed, and when coupled with his 92 Reactions, 98 Agility and 94 Balance, means he wins the ball back countless times in midfield.

On the other end of the pitch, he still has 88 Positioning, 85 Shot Power and 88 Long Shots, meaning that if he does get a chance, it’s likely he’ll trouble the keeper.

Getting him on the ball from deep will allow him to dictate the tempo of games, and with decent defending abilities, he should be able to win back possession a lot of the time too. 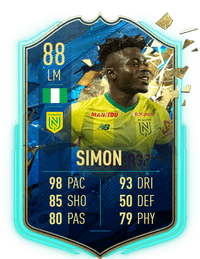 The 2nd best player we’d recommend getting your hands on from the Community TOTSSF may be one of the lower-rated cards in the team, but Moses Simon from Nantes is definitely one to watch.

Electric pace, maxed out agility and balance, 4* Skills and 5* Weak Foot make him one of the top players for the FUT 20 meta this year, and with links to Neymar and Mbappe, could be a perfect wide option for an attacking front 4.

Starting off, 98 pace speaks for itself, he’s one of the fastest cards in FUT. 99 Agility and 99 Balance, alongside 95 Dribbling make him one of the quickest turning cards this year, and being 5’6”, he has such a low centre of gravity, making it ridiculously hard to defend him.

5* Weak Foot adds so much value to the card, adding the factor of unpredictability to his attack, with the ability to shoot/pass on either foot with ease. Finally, being a big upgrade on his previous FUTMAS card, Simon can now shoot, with 85 Finishing and 92 Shot Power.

For links, if you’ve previously completed the 88 Osimhen Future Stars objective, a top strong link is available, as well as a very usable LB link to 87 Fabio if you chose him in the recent Sibling Rivalry SBC.

As far as in-game roles go for Simon, with his pace and dribbling, it’s hard to advise against playing him in a wide role, however, with his weak foot, you can play him anywhere across the front line. 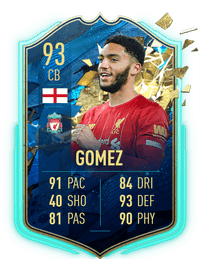 The top player we’d recommend getting your hands on, if you can, from the Community TOTSSF squad has to be the 93 Joe Gomez, who goes near the top of the list of best CBs in FUT 20.

There’s not really much to it, 91 Pace on a central defender with 93 Defending and 90 Physical. He is, simply put, in the list of top 5 CBs this year in FUT.

Being 6’2” is a big bonus in addition to his pace, with 93 Strength meaning he’ll not only catch up to but push attackers off the ball with ease. His 93 Defending includes 95 Interceptions, 93 Defensive Awareness, 96 Standing Tackling and 91 Sliding Tackling, which all speak for themselves.

97 Reactions under his dribbling are of major importance and will be key in turning quickly to cut out passes or track opposition runners.

When you factor in as well, that you can link Joe Gomez to 99 TOTY Van Dijk and 97 TOTY Alisson, you have possibly the best defensive trio in FIFA 20.

Joe Gomez can do it all in defence, and could even be played at full-back if absolutely necessary, however, his best position has to be as a right CB, either in a 4, or in a 3, playing on the right-hand side to defend pacey wingers or strikers.