Is The Initiative's first game a new Perfect Dark for Xbox Series X?

Microsoft's new studio's first project could have been leaked via LinkedIn.

Xbox Series X is still scheduled to launch this year, and Xbox fans will be excited to know more about games they'll be able to play on the system.

The Xbox One generation offered a handful of worthwhile exclusives, but the PlayStation 4 dominated with the likes of God of War, Horizon Zero Dawn, Bloodborne and much more – prompting Microsoft to buy plenty of studios and create one of their own, The Initiative.

Read More: How To Get Halo Infinite For Free On Xbox Series X

While the studio has been hard at work on a title for some time, what that project is has been under wraps, but we may now have a glimpse at what's coming from the new team.

Twitter user Klobrille did some digging into a LinkedIn profile of a technical designer at the Initiative, and it offers some interesting tidbits. 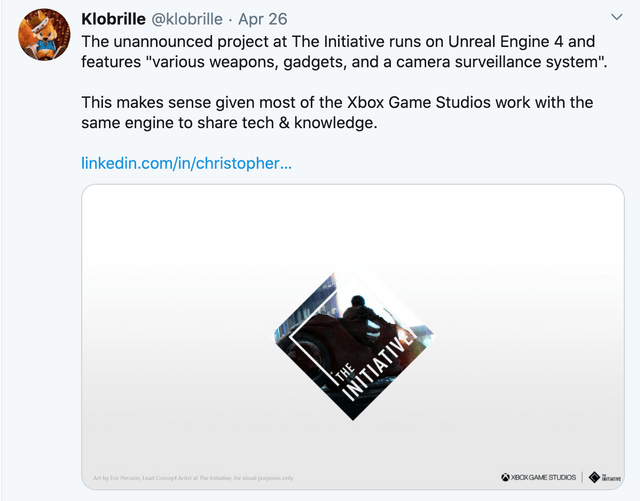 "The unannounced project at The Initiative runs on Unreal Engine 4 and features "various weapons, gadgets, and a camera surveillance system"" the tweet says, which suggests the potential of something in the vein of Perfect Dark – a franchise Microsoft has owned the rights to since its acquisition of Rare in 2002.