FIFA 20 TOTS So Far Review: Top 7 EFL Team Of The Season So Far Players You Need To Try Out

MattFUTTrading goes through the Top 7 Players that you HAVE to get your hands on from the EFL Team of the Season So Far.

Team of the Season So Far is well underway in FIFA 20 Ultimate Team and the Community and EFL TOTSSF squads were released last Friday.

It’s time to start looking at some players that you need to try out in FUT 20.

Here are our Top 7 players that you need to try out from the EFL TOTSSF squad, with player analysis on each player, the best roles and playstyles; as well as the potential prices you should look at picking them up at. 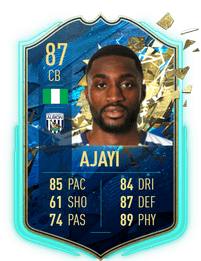 The West Brom CB is by far the best Championship CB in FUT 20, thanks to his 85 Pace, 87 Defending and 89 Physical, along with his 6’4” stature in-game, as well as an impressive 84 Agility.

With a strong link to fellow TOTSSF West Brom maestro 91 Matheus Pereira, Ajayi can easily be linked into original hybrid squads, alongside some other Championship TOTSSF items, such as 92 Kalvin Phillips and 86 Marek Rodak.

Being a CB, there are relatively limited roles Ajayi can play, however, he excels both in a dual CB or triple CB formation, thanks to his pace and physical presence.

As a ball playing CB, his 93 short passing and 86 long passing are very useful, and with 94 ball control and 90 composure, you can feel comfortable keeping possession with him in the side.

The highest average rated player in the Championship season by WhoScored, the QPR attacking midfielder boasts a number of key attacking traits that make him a handful in the FUT 20 meta.

With 4* Skills, alongside key 92 Agility and 89 Balance stats, Eze ticks the box for a tricky attacking midfielder.

Furthermore, with all key shooting stats at 87/88, he can handle himself in and around the box, finishing moves as well as creating chances, with his 90 Vision and 94 Short Passing. 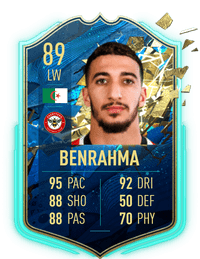 The Algerian winger makes it into our top 5 picks that you need to try out from the EFL TOTSSF, with his lightning pace, top shooting stats, as well as his dribbling abilities.

The key stats to mention are obviously his 95 pace, with 96 Acceleration, and a vitally important 97 Agility stat. When coupling his pace and agility with his 4* Skill Moves, you have the recipe for a deadly winger in FUT 20.

When you also factor in his playmaking and shooting abilities, Benrahma becomes more than just a pace demon out wide, but also a threat in front of goal.

With an awesome strong link to the TOTSSF Ollie Watkins (available in SBCs), Benrahma looks set to be on of the best wingers under the 75k price point, assuming you can utilise other Championship players to fit him into your team.

To fully realise Benrahma’s potential, he has to be played out wide either on his natural left-hand side or with an in-game position change to the right-wing. Using his pace to break down the line is a big part of the FUT 20 meta, but being able to finish adds another dimension to his game. Definitely try him out if you can! 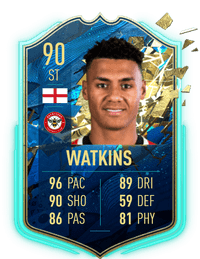 The only SBC card of our top 7 picks, but certainly someone you should consider completing if you’ve got some players in your club or some spare coins kicking around.

The prolific Brentford man possesses a number of key stats that make him a lethal striker for FUT 20, be it as a starter, or an impact sub. First off, his 96 pace is what grabs the attention, and with 92 acceleration and 99 sprint speed, if Watkins gets going, not many will catch him.

Moving onto his shooting, which includes 93 Finishing and 90 Shot Power, Watkins is deadly once in the box, and with 99 Agility, 91 Dribbling and 90 Strength, it’s very difficult to get him off the ball.

With the strong link to Benrahma, as well as links to other Englishmen in the EFL TOTSSF squad, Watkins isn’t difficult to fit into your teams and is definitely an SBC you should consider completing if you have any intentions of getting some other EFL TOTSSF cards.

In terms of playstyles, as a central/dual striker, he’ll be brilliant, thanks to his lethal finishing and quick dribbling, allowing him to create and score chances at will.

If you want to utilise his pace a little more, you can even play him out wide in a 4231 as a right or left attacking midfielder. 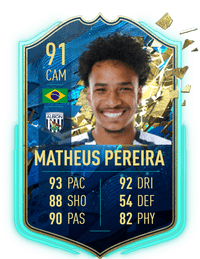 Moving into our top 3 picks for the EFL TOTSSF, we have the mightily popular Brazilian, Matheus Pereira. With awesome card stats and a 91 rating, Pereira is one of the most in-demand cards in the team, and with good reason.

93 pace, 92 dribbling and 4* Skill Moves, instantly makes him an in-demand attacker, with 97 agility and 99 balance allowing for quick turns in and around opposition boxes, which are key to creating chances in FUT 20.

With all his shooting stats being in the mid to high 80s, Pereira can also score from his deeper CAM role, however, the main draw to this card is his passing stats, with 93 short passing, 92 Crossing and 98 Curve being key attributes in making him a top-level playmaker.

Alongside other Championship TOTSSF players, our 7th place pick Semi Ajayi provides a solid strong link, however, you can easily link Pereira into your teams along with popular Brazilians such as Neymar. 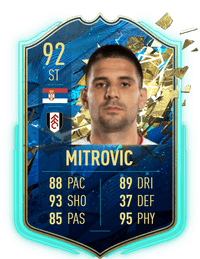 The big Serbian ST takes our 2nd place spot in our Top 7 picks, with 5 of his 6 card stats being above 85, with an incredible 88 pace, 95 physical combination, standing at 6’2”, the perfect player to lead the line.

Despite being well over 6 feet tall, Mitrovic possesses 82 Acceleration and 93 Sprint Speed, alongside 99 Strength, 99 Aggression and 93 Jumping, making him one of the most physical strikers this year in FUT.

Being tall, he still has 85 Agility, which is really good for a man of his size, as well as 97 Reactions and 96 Ball Control. His shooting is where he really excels, with 99 Positioning, 95 Finishing and 99 Shot Power, along with a usable 4* Weak Foot, making him a prolific striker in the 18.

In terms of roles, he’s more than capable of playing a lone striker role, however, I’d make sure you have someone around him to create, perhaps an Ollie Watkins type player, that has a little more in the pace department. 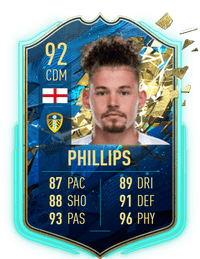 The number 1 pick from the EFL TOTSSF, without doubt, has to be the main man, Kalvin Phillips. With only 25/29 in-game stats being 80 or higher, you’ll struggle to find a better card that is as well rounded as the Leeds man.

We could go through and analyse all his stats, but it’d take too long. Everything from his pace, to his shooting, to his dribbling, to his incredible passing ability, to his unreal defending, to his nearly maximum physical stats. Everything and anything you could need in a box-to-box midfielder, Phillips has in abundance.

With links, you have all the English TOTSSF options to choose from, with Ollie Watkins being a key link to utilise, as well as strong defensive options in Matty Cash, and other League One and League Two TOTSSF cards.

As an ideal role, the sky really is the limit for Kalvin Phillips. He can play alone CDM in a 41212, a dual CDM in a 4231, a box to box midfielder in a 442, or even a more advanced playmaking role, it’s entirely up to you how and where you use this card. He is someone that you have to try before the FUT 20 cycle ends.