Epic Games has announced a new Fortnite Champion Series Invitational, not long after the Season 2 FNCS finals. This tournament will be offering the best players an insane prize pool of $2 million.

This tournament will be offering the best players an insane prize pool of $2 million.

How it will work?

A new scoring system will be put into place for the FNCS Invitational - players will earn 4 points per elimination and 1-33 points depending on their placement.

Epic has said that this is a solos competition and only the best will be progressing each weekend!

The best in each region will be taking part, and Epic has divided invites into groups of 100. 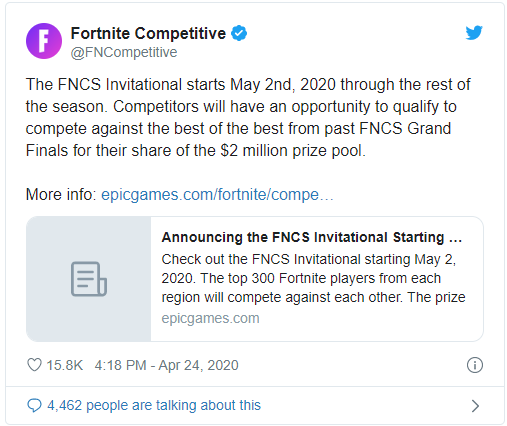 When will it happen?

The FNCS invitational is set to start Saturday, May 9th, and will span across three weekends.

But don't get ahead of yourself! Before that, Epic has said they will be hosting an Open Qualifier on May 2nd, for 100 spots in the event, as well as this, players with 'Champion' rank who didn't receive an invite, will have the opportunity to jump onboard a week earlier for a shot at competing in the major tournament.

The prize pool for this tournament is an incredible $2 million, which will be split amongst the best performing players.