Here is the schedule for the Team of the Season So Far squad releases.

Team of the Season So Far is only 1 day away in FIFA 20 Ultimate Team, arriving tomorrow at 6pm UK.

With all of the 16 TOTSSF squads being confirmed via a loading screen, we can begin to look at when we can be expecting various squads to drop in FUT.

Here are all the Team of the Season So Far squads we’ll be seeing in FUT 20, along with the predicted release dates for each, along with links to all of our predictions so far.

Confirmed Team of the Season So Far Squads

As confirmed on Tuesday evening, the 16 confirmed Team of the Season So Far squads, to be released over the next 6-8 weeks in FUT, are as follows: 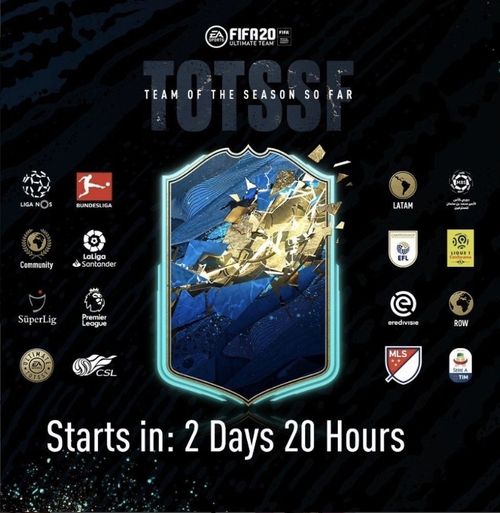 Team of the Season So Far Schedule

With the promotion lasting 8 weeks, starting tomorrow on Friday April 24th, 2 TOTSSF squads will be released every week, with a major league, and an accompanying smaller league being released into packs, as well as the following set of Weekend League rewards. Each team will likely be available for 7 days, before leaving packs.

The reason we’ll have two leagues released at once is to have a slight control on the rewards obtainable via Weekend League player picks.

With only 1 guaranteed major league TOTS from Gold 2 rewards and above, it’s highly likely that players will pack lower league TOTSSF card instead of the more expensive, desirable cards from the major leagues.

That being said, we’re in for a solid 8 weeks of content!