Just Like Old Times is the penultimate mission in the campaign. This walkthrough will help you through it in no time at all.

The remastered campaign from Call of Duty: Modern Warfare 2 is out right now on PS4 and will soon be arriving on Xbox and PC, releasing on April 30th.

In this article, find a complete walkthrough of the “Just Like Old Times” mission on the hardest possible difficulty. 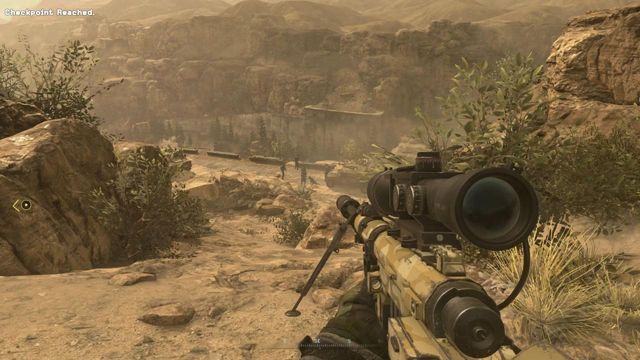 Hot off escaping the boneyard by the narrowest of margins, you and Price are now on the run from Shepherd and his men deep in the Afghan desert.

You come to the top of a cliff where a group of Shepherd’s men is overlooking the canyon. Wait for the group to separate, leaving three soldiers and a dog and its handler by the truck.

On Price’s mark, take down the two enemies on the right while Price deals with the other soldier, the dog and the handler. 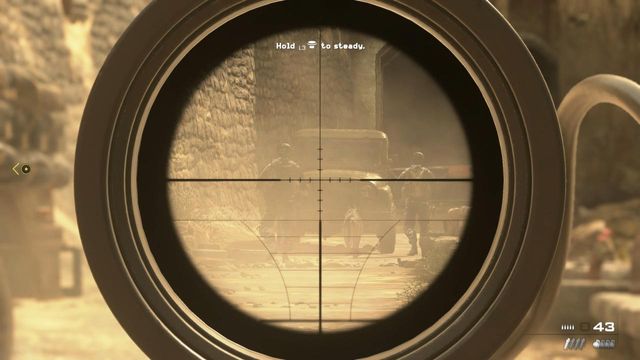 TIP: Don’t forget to brake when speeding down the cliff. Go too fast and you will alert the two enemies waiting at the bottom, all but guaranteeing a reset to the previous checkpoint. 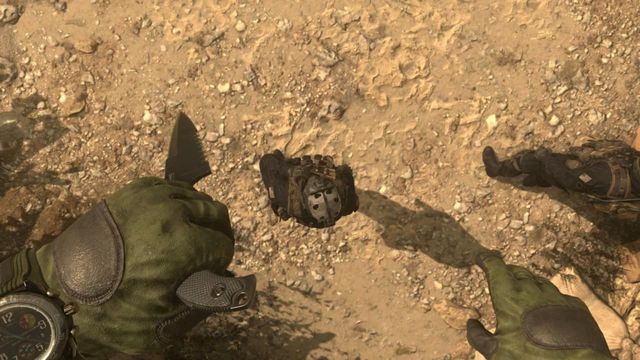 Approach the two unsuspecting soldiers from above and eliminate them with a knife to avoid alerting any more enemies to your location.

Make your way inside the cave and follow Price as you attempt to avoid any enemy contact. 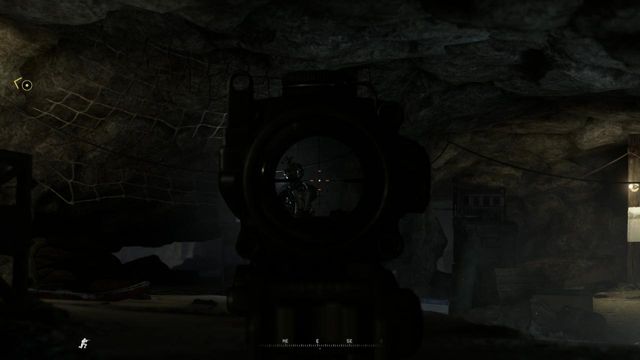 You have the choice of letting the guard move along or take him out. To keep the mission rolling, take him down and continue advancing through the cave. 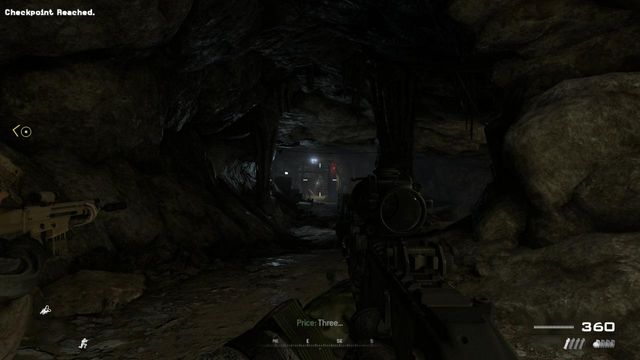 After navigating past a large group of enemies, you find yourself looking at a dimly lit stairwell with only the glint of the enemy torches shining.

Like earlier in the mission, shoot them on Price’s mark and work your way up the stairs and further into the cave.

Price will deal with the lone soldier at the top of the stairs and you will enter a dark room filled with mist. 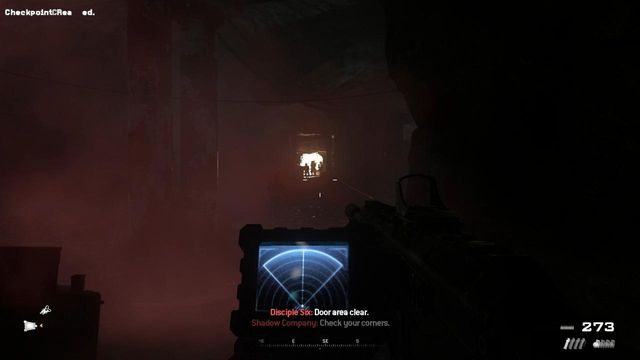 You hear a “breach and clear” command come in over the radio and the lights go dark. In front of you, there is a table with an ACR equipped with a heartbeat sensor.

Pick it up to get a better idea of where the enemies are located in the darkness. The opposition begins to open fire on your location.

This is your cue to engage with them and make your way onto the small catwalk overlooking the canyon. 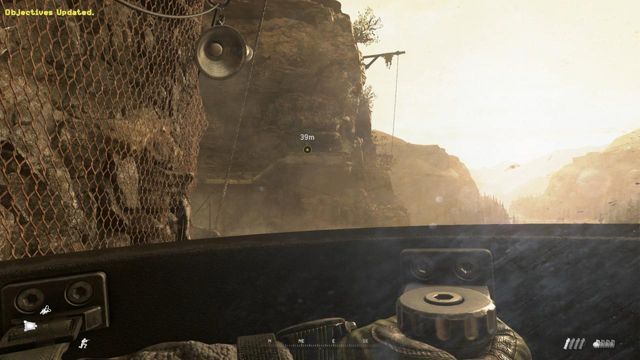 Grab a riot shield and begin walking across the catwalk while Price lays down some covering fire, taking out any enemies attempting to engage with you.

Once across the catwalk, another wave of opposition will drop in. Use grenades to deal with the riot shields quickly. 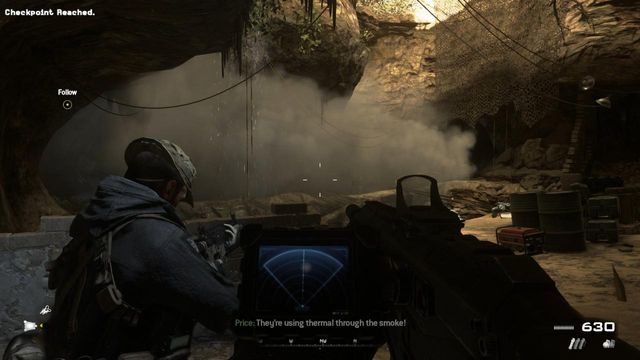 Now in another area of the cave network, more troops will attempt to halt your progress. Smoke grenades will pop so switch to a thermal weapon to get a clean shot on the enemy.

TIP: Due to the sheer volume of enemies in the smoke, use cover to your advantage rather than engage with the enemy in the open. 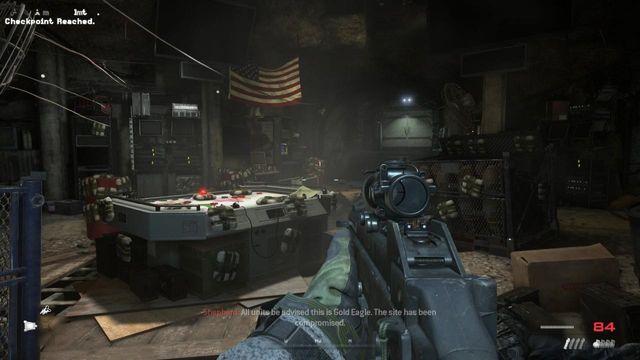 Once you have made it past the smokes, you and Price will come across the control room. Breach the door and deal with as many enemies as possible during the slow-mo breach.

With the control room littered with explosives about to detonate, override the door and escape the room but before you have the chance to make it very far, you are blocked by an airstrike that attempts to take you out but deals more damage to Shepherd’s own men than you and Price. 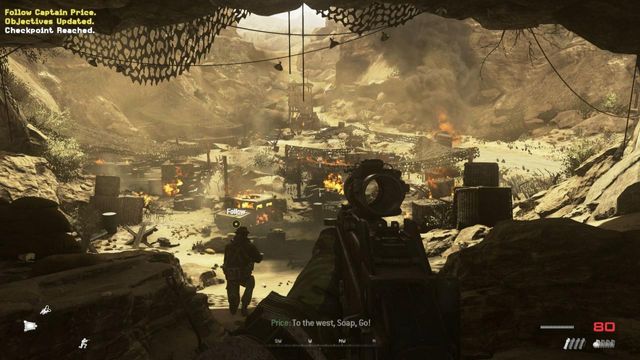 More troops drop in from a small helicopter and are relatively simple to deal with. Once the area is clear, move into the cave as the screen fades to black.