Love is in the air, and you snag some sweet rewards during New Horizons Wedding Season!

The recent April update for Animal Crossing New Horizons marked the start of what seems to be event season as it brought in a few new ones including 'Wedding Season'.

In a unique twist to events, Wedding Season is being added to New Horizons to commemorate the most popular time of the year for weddings - extending from late spring and through to early fall.

When Is Wedding Season In Animal Crossing New Horizons?

Wedding Season in Animal Crossing New Horizons has a tentative start date of June 1st, 2020 and is set to end on June 30th, 2020.

This is a lot shorter than what is considered prime-time wedding season in the real world, but gives players an entire month to take part in the season of love!

What Will Wedding Season Include?

Instead of actually getting married in New Horizons (which we know some players would love to do) you will be tasked with capturing some of the incredible photos of the newlyweds at Harvey's photo station.

When you load up your game Isabelle will announce that is wedding season and you will be rung by Harvey asking you to come to his island - which if you do not know, you can access by taking a free flight there whenever you please!

You’ll find Cyrus and Reese, who want you to take over staging and taking photos that recreate their past.

Since you are going to be taking photos of all the villagers looking to get married during the month of June, you are, of course, going to be compensated for your actions. 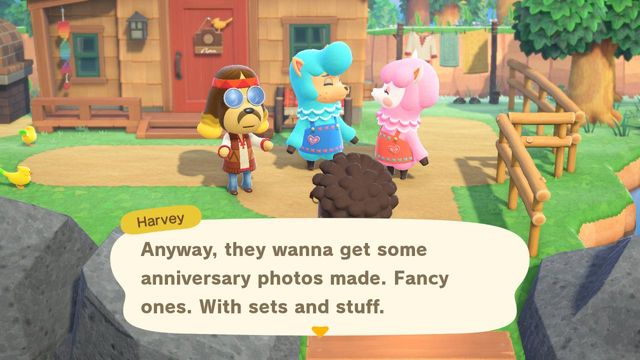 We do not know the full details about what is going to happen in Harvey's photography studio, however, the player will be in charge of taking photos for the Llama villagers Cyrus and Reese.

We can suspect that the player will be tasked with creating a magical background depending on what the couple is looking for.

Once you complete these tasks for the couple, you will be rewarded with some sweet wedding-themed rewards!

The Alpacas will reward you with some Heart Crystals and wedding-themed decorations.

We can also assume that this is not the only couple looking to get their photos taken during the month, so keep your eyes peeled for more information in the coming weeks!